As Sam gets a handle on how to lie, Doug is struggling to deal with the truth about Elsa and his ability to be a single parent.

After the lie of her affair blew up her marriage, during her moms support group she decides to take the approach Sam has to life and just be honest – sometimes in a brutal way. Which shocks a few at first, like her friend Luisa, but telling the truth about a kid with autism having a bad haircut opens a possible job, if not career, for her. Since it is rather hard to get a barber who understands kids with autism, so Elsa being good at it is a blessing. As well as Luisa setting a price for something Elsa would do for free.

But, the honesty isn’t just in where she finds her comfort zone, but around Julia as well. Who she thanks and gives props to for how she helped Sam. And maybe the whole honesty rubs off on Julia for she is honest to herself about having a boy and her mom about being pregnant. 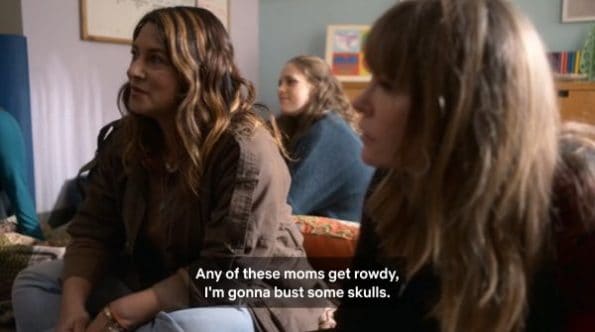 Louisa: Any of these moms get rowdy, I’m gonna bust some skulls.

While still very confused what is the point in seeing Julia, unless she will become Sam’s therapist again, I’m glad Elsa was willing and able to admit she did a lot of good with Sam. But what I’m especially happy about, and waiting for, is Elsa to go in on Doug’s ass. As noted later, she tells the truth about her affair, but there is the need to wonder if she may get petty. I’m talking bringing up with Doug left and wondering how long she will have to be ostracized and unforgiven considered what he did. Because, as much as living with Luisa is nice, maybe even finding a new career, clearly Elsa wants to be with her family. Even if that means sans Doug, not being around with and for her kids is slowly killing her. Doug too, as we’ll speak on later.

With Sam wanting to get into college, he has to write a personal essay. Which is a bit hard for him since they talk about writing what your greatest achievement is and for him that is seeing that stripper’s breasts. Which is a surprise since you’d think Paige’s hand job would be number 1. I guess he didn’t get off.

Anyway, Ms. Whitaker naturally doesn’t see that as appropriate and tells Sam to head back to the drawing board. Leading to the idea he needs to lie a bit come to mind. Something his mom won’t teach him, despite being the biggest liar he knows, so he goes to Zahid who presents to POF (not related to Plenty of Fish – but probably a method many use on there) in how to lie.

To break it down: P for Praise, O for obviously, to reinforce the lie, and F for flee, since follow up questions will poke holes in lies. Sam gets this down pack, in theory, but when he practices it on Paige? Well, he says he has a girlfriend and they are having sex – which happens while she cuts paper and eventually cuts her fingertip.

Luckily, that was just a trial run and when it truly matters, like when Zahid and Sam’s boss, Bob, finds Zahid smoking weed and is ready to fire him, Sam lies perfectly. Well, at least good enough for Bob to think Sam uses weed due to his autism. Which doesn’t make a huge amount of sense, unless weed is supposed to help him chill out, but I’m not a medical professional.

But, point is, with Zahid pulling through once again, and being shown as another person Sam is willing to hug, and let hug him, he has his essay topic. That is, being a genuine friend with someone who treats him without prejudice or talks down to him. They are equals who offer different things to one another and because of that bond, they have a healthy friendship. Which is what Sam wants to say rather than, as Ms. Whitaker pitched, focusing on his autism. For, in the long run, people don’t talk about how they have ten fingers and toes, and they are born with that, so why props his autism? 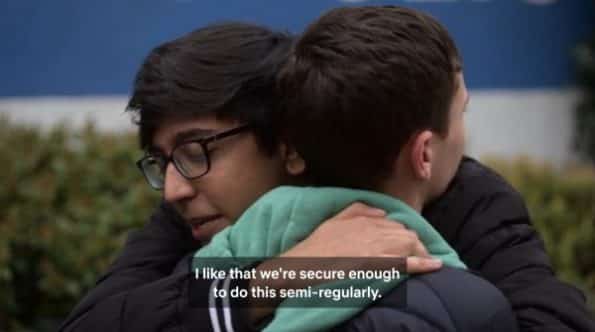 Zahid: I like that we’re secure enough to do this semi-regularly.

Anyone else surprised Sam didn’t have a moment of reflection and question if Zahid lied to him? Also, I can’t be the only one who got teary eyed when Zahid and Sam hugged right? For as much as Casey is probably my favorite character, Zahid is a close second. Which is why I get so frustrated with Julia since, for some reason, the actor who plays Zahid is still noted as a guest star while Julia is a regular. Even though her connection to Sam is currently non-existent.

Zahid aside, I feel worse and worse for Paige episode by episode. Yet, I’m kind of proud of her. Clearly her feelings for Sam are overwhelming and that is why she can’t be with him. But Sam still using her to test out theories and practice on – That’s f***ed up.

Almost as f***ed up as Ms. Whitaker trying to push the idea the main selling point of Sam, to colleges, is that he has autism and yet can do neuro-typical things like hold a job. Not to say her heart isn’t in the right place, but it seems like we’re going to continuously see her say stuff which would raise a red flag. Which, really thinking about it, is part of the learning process. I mean, everyone now and then I get a comment saying what I typed raises a red flag or is side-eye worthy. Most of which gets noted and if it is a valid criticism, I edit myself, sometimes the post, and move on.

Apparently, drunk Casey likes to sext and send videos. Not explicit videos, get your mind away from there, but videos of her singing camps songs and dancing. Which embarrasses her to the point of not wanting to see Evan. But, with him a bit more mature, and honestly one of the best boyfriends I’ve ever seen a girl have on a show, or in a movie, he shows some embarrassing videos of him doing a karate commercial to make her feel better.

However, one person who isn’t feeling to well is Doug. Trying to be super dad is taxing on him and then he decides, since Elsa is on a truth kick, to ask her about the affair. Something which overwhelms him a bit. To the point, as he processes that conversation, and decides to walk outside, he passes out. 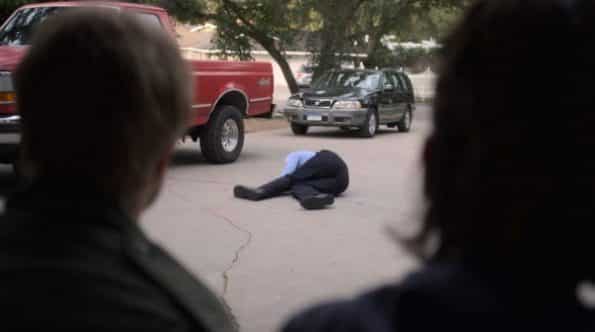 Bless Elsa. Doug wanted answers and rather than try to provide excuses and be defensive, she gave them to him the best she could. But also shout out to Doug for trying to do everything he can for those kids. Even if that exacerbated his problem. Though, let’s not let the kids off the hook. Casey and Sam can’t do laundry? Neither decided to try to learn how to cook when their mom did it? Nothing?

If Doug is going to last, like Sam was tasked with asking for help, so must Doug. Leading me to realize, a lot of the things Sam is told to do to make his life easier, usually, the same advice comes around to another character. Really pushing, as said before, there is a universality (which I’m surprised is a word) in terms of how people with autism can deal with the world, with or without assistance, as neuro-typical people do.

Sometimes you have to lie to get by,
— Casey