It’s a good episode for Doug and Elsa’s kids. Casey breaks a track record and gets recruited to a fancy school and Sam gets a girlfriend.

At a 400-meter track meet, Casey breaks a racing record and bests the runners of the top school in the state. Something so notable that the coach for the other team, Shelby Pines (Stacey Moseley) of Clayton Prep, wants to recruit her.

Problem is, Elsa relies on Casey to be in the same school as Sam. Perhaps not just in terms of controlling his lunch money but looking out for him. So after only a few minutes of thinking it over, she says no. This leads to Evan going off and really going to bat for Casey in the cutest of ways. Which leads to Doug to like the kid. Even if he thinks he is smoking weed around his daughter.

On an unrelated topic in episode 3, there was a question of whether Casey ever blames Sam for anything that happens to her? That maybe her passive-aggressiveness with him is perhaps her way of expressing her frustration without trying to actively hurt Sam’s feelings? For who knows how much she may have missed out on because of Sam, more so Elsa, just thought it was a bad idea.

For example, take how Elsa acted in the store in episode 3, who knows how many times she over thought how Sam would react and to avoid any issues she just said no. Meaning either Casey didn’t get to do something at all or had to hope Doug made an exception for her and took her himself? Which, when I think about it, may be why she doesn’t bring up the abandonment at all and she is seemingly on the way to being cool with him again. Granted, he missed her breaking a record, but that was because of a Sam thing. However, maybe she truly does get the reason why he tried to escape the situation.

Much less is thankful he came back. After all, if Casey thinks things are bad now, imagine how it would be if Doug wasn’t around. At least, pre-Evan era, he has been an advocate for her and not a slave to Sam’s needs.

I Struggle Too: Doug, Elsa, Julia

Being that Doug is making some breakthroughs with Sam, he decides to go to Elsa’s support group. Which sort of brings down his high. If only because the group leader, Kathy (Wendy Braun), repeatedly interrupts and pushes Doug to use politically correct terms. Which, in the process of doing that, makes him feel bad for speaking up. Especially after a woman who doesn’t have a high functioning autistic child, I mean kid with autism, like Doug and Elsa do.

Yet, Julia sort of helps with that. They meet by chance and she shows why Sam probably likes her. For while she is a doctor, she isn’t as overbearing like Kathy when it comes to terms and things like that. She shows herself as someone easy to talk to. Which may come of some use as she questions why there was a strawberry under the couch when talking to her boyfriend Miles.

As for Elsa? Well, after her fun night, she is racked with guilt all the next day. To the point, she can’t kiss Doug without thinking of Nick, sees signs saying she is a slut, and even hears it on the loudspeaker. So, to try to qualm her guilt, she breaks things off with Nick. As for whether she truly means it and will avoid his possible calls or texts? Only time will tell.

Considering Doug’s experience, I can fully understand why he didn’t like those group sessions. For one, they are both a humbling and depressing experience. Then, on top of that, you have someone like Kathy, who lacks any real warmth, who is orchestrating everything. Making it where when she corrects you, it is like being told you did something wrong by a strict elementary school teacher. Making me wonder, considering how much Elsa seems to like going to this group, how in the world did she come across Julia? The answer is likely a recommendation, but considering how Doug takes to her vs. Elsa, it seems almost odd Julia lasted this long.

Which leads to the question of what may happen when the truth comes out about that strawberry? Thus far, Julia has been very understanding, as he job requires. However, Sam crossed the kind of line it is hard to say she can forgive and just try to redirect him on. Especially since it is messing up her current relationship.

Speaking of relationships, should the countdown begin for the end of Elsa and Doug’s? For with him not cheating on her back in 2004, so comes the question of what her comeback will be when Doug eventually finds out? Will the abandonment and him not being supportive become an issue? Likely. However, her full on cheating, that is making out and having sex, with another person doesn’t necessarily equal 8 months of abandonment.

Not to imply either one are saints in the situation, but the argument could be made if Elsa wanted to feel needed she could have just volunteered to help those with non-high functioning autistic kids. Maybe take up time with new parents to show them the ropes. 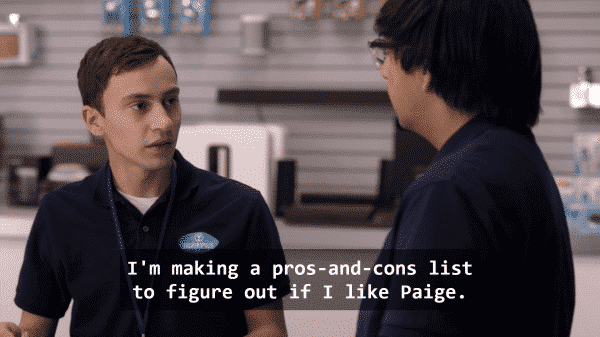 The girl from the last episode, Paige, she continues to try to be part of Sam’s life. Something which is quite difficult until, of course, Julia opens Sam’s eyes. She helps him realize that maybe Paige likes him and so Sam thinks he should just jump on that. After all, it isn’t like he has a bunch of options. However, Julia reminds him that he should actually like her. So she says to make a pros and cons list.

Which becomes a problem. For while Sam does let Paige in, he follows that by writing a list which of course she wants to see. After all, Sam outright says he is writing a list about her. So, when she gets invited over, based off Zahid’s recommendation, for dinner, she finds a way to read the list. Of which, she takes the cons personally.

Yet, when she storms out, strangely Sam follows her. This often literal guy recognizes he caused pain and doesn’t necessarily give a grand apology, but takes note of what he did. Something Paige admits she was also doing, in her mind, so she isn’t necessarily pissed to the point of walking out of Sam’s life. Making it when Sam asks her out, after thinking about it, she says yes.

I like Paige and I do hope that whenever Sam mentions the practice girlfriend nonsense, it doesn’t break her heart. Especially because she is part of the, I guess you could say, normalizing of Sam? As in, treating some of his eccentricities as quirks. Which I know is probably not the best term, but between not watching or reading media about autistic people, it is hard to know what the proper vocabulary is.

But with that said, it should be interesting how Sam handles having a girlfriend. Will it be in a sort of Sheldon way, in Big Bang Theory, where it is mostly by name and hardly much more or will Zahid taint the boy’s mind? Sam has already said he may not understand Zahid but trusts him, so who knows what nonsense Zahid may plant in Sam’s mind for Paige to deal with.