We officially learn what Doug did and also see how Elsa reacts to everyone not needing her as much.

With a girl named Madison (Marisa Davila) saying that Sam is weird and dresses the same every day, Sam asks Julia if that is a problem? Leading to her talking about how important style is and also Sam picking out his own clothes. With that, he calls upon Zahid to help him pick and this bothers Elsa. After all, with each step towards autonomy and independence Sam takes, it forces her to focus back on herself. Which is something she hasn’t done for at least 13+ years so the idea is scary. To the point, it is really starting to make her dislike Julia. Even to the point of thinking of finding a new doctor for Sam.

Though, all things considered, Julia may have had a point. For this odd girl, who maybe just odd but possibly on the spectrum too, takes note of Sam’s chosen shirt. The one everyone, Casey, and Zahid anyway, was against. But who knows if this girl is willing to be a practice girlfriend while Sam waits on Julia [note]Who discovers the strawberry Sam dropped.[/note]

Elsa held out as long as she could. However, with Doug not supporting her on the Julia thing and just feeling unneeded, she decides to meet up with Nick. However, it goes beyond maybe treating him as another son or something similar, they make out and possibly more. Okay, I’ll take back thinking it was a bad idea for Elsa and Nick to hook up. If only because I kind of get it. She both wants to escape her life yet cling to the familiarity of it. After all, she is comfortable. Being needed has given her life purpose and has filled up so much of her time she needs to do things by a calendar and an alarm. So with that possibly coming to an end, it is scary. Especially since her husband doesn’t understand and, as we learn below, it seems he was never really reliable on being empathetic in regards to the situation.

If anything, he took on any and all Casey issues and left Elsa to handle Sam. Hence the distance between him and the boy and his close relationship with Casey. Which, to my surprise, she doesn’t call him out on. Though, considering what she just learned, surely she might still be processing. However, I’m sure as she considers why Elsa acts as she does, and Doug’s relationship with Sam, it will just add fuel to the fire. 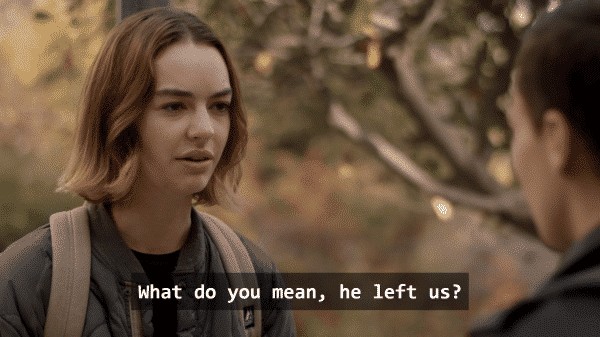 Before the events of this episode, Casey felt like her dad was the only one who got her. The only person who didn’t lie to her and because of that they were close. However, between how he reacts to Evan’s existence and her learning that Doug abandoned their family for 8 months in 2004, it destroys everything. Especially when she learns it was because of Sam’s diagnosis.

It might be twisted to wonder this, but I do wonder if Casey may blame Sam for their dad leaving out loud? Granted, it was at least 12 to 13 years ago, depending on the year this story takes place, but Sam’s diagnosis has had a big effect on Casey’s life. She doesn’t note it much, but consider how she has to defend him and also low-key worry about him. Plus, in a way, he is part of the factor which makes life kind of unbearable at home. For with how much Elsa has to worry about Sam, between trying to bring Casey under the same conditions to trying to not make her feel forgotten, she does the same things with her. Then there comes this Doug thing. Of which, Casey can’t understand why Doug abandoned his family. Yet, with his explanation, I do wonder if that may ever sink in – the reasoning that is. Maybe to the point Casey may forgive him and even give Elsa the props and love she wants? Because Casey and Doug were talking about escaping and while perhaps messed up to say, I think she may come to understand how, like she, her dad wanted to escape the family. Alongside understand why Elsa has become who she is because Doug set a precedent when he did that.

This is all very interesting, what goes on in “Julia Says” and makes me wonder will we go deeper down this rabbit hole or not?