Anne with an E: Season 2/ Episode 5 “The Determining Acts of Her Life” – Recap/ Review (with Spoilers)

Being that Anne is a girl of a certain age, and obsessed with romantical things, the idea of a first kiss both intrigues and haunts her.

Table of Contents show
1 Back in Avonlea: Gilbert, Sebastian
1.1 Commentary
2 Oh To Be Beautiful & Desirable: Diana, Anne, Josie, Jerry, Billy, Marilla
2.1 Commentary
3 A Friend Indeed, But Sometimes That’s Not Enough: Marilla, Cole, Diana, Josie, Billy, Anne
3.1 Commentary
4 Collected Quote(s) & .Gifs
5 Highlights
6 On The Fence
7 Follow Wherever I Look on Twitter, Like us on Facebook and Subscribe to the YouTube Channel.
7.1 Previous Episode’s Recap
7.2 Check Out Other TV Recaps

Back in Avonlea: Gilbert, Sebastian

Though Gilbert’s letter to Anne, which causes a minor stir, says he isn’t ever going to return, thanks to a little nudge from Sebastian he is right back at his farm. Unfortunately for Sebastian though, it is in the dead of winter.

So what is the plan here? Gilbert is just going to waltz back into school, shake things up and pursue being a doctor as Sebastian works the land? On top of that, it is winter. With their combined earnings, does Gilbert and Sebastian have enough to not only last the winter but buy what is necessary to run the farm? Never mind, with there being no real diversity in Avonlea, not even a native, how will Sebastian be seen? Things are going to become quite curious.

Because of boys and girls like Josie and Billy, as well as a very strange girl at the asylum, Anne is quite insecure. To the point when Josie initiates a game of spin the bottle, it is one of the most embarrassing moments in Anne’s life. And what certainly doesn’t help is Jerry, with Diana, being rather flirtatious and Marilla commenting on how good it is Anne is plain and what that could mean for her.

For you have to remember, Anne is a romantic who, at best, has but Diana and her friends to live out her fantasies – to a point. But a boy? With most of them rude or making mean comments or strange noises at her, things seem rather helpless. And as much as Anne’s imagination has kept her alive, it also easily turns on her.

These asylum flashbacks, while not as hard hitting as in the first season, are still very peculiar and flare up emotions. Leading to the need to ask, who is this girl who licked Anne and threw her book into what looks like tar? I know the why isn’t likely to be answered but the who is something I strongly wish they would go into.

Beyond that, I must say it was hilarious to watch Marilla, and Matthew to a point, stumble on how to handle Anne asking about kissing, their personal lives, and things of that nature. Though, I must say, I found it quite awful how Rachel’s advice to Marilla was to beat such ideas out of Anne. It really pushes you to understand why we haven’t seen Rachel’s kids.

Luckily, Marilla always sees Rachel’s advice as something to not follow to the T but flip it and go with that. Though, with her talking to Matthew about it, it really does make me wish to see Marilla and Matthew as kids again. Especially in the lead up to Michael’s death, and the thereafter. For every time we get reminded of how much Marilla and Matthew put aside because of that death, it makes you wonder how did they find themselves, for decades, settling into this life and looking, perhaps solely, at one another for companionship?

While it still isn’t 100% clear why Billy is so cruel, when it comes to Josie we are clued in. For one, she is being raised on the idea that beauty is everything – including power. So for this girl, Anne, to subjectively have none and yet Josie gets excluded from games and gets rejected by the likes of Cole, something seems wrong. Yet, when it comes to Cole, he simply doesn’t like her. Now, as for whether he likes Anne? Well, that’s hard to say.

When it comes to Anne, she sees Cole as a kindred spirit and him offering to kiss her when she plays spin the bottle surely puts him in a positive light. However, whether that was to be a good friend and spare her embarrassment or he genuinely wanted to kiss her is up for debate. All that is clear is, for the first time in who knows how long, when Josie and Billy start being cruel someone finally said something. In this case Diana and a few others.

However, even with their support, and Anne taking control of the situation by dipping and kissing Cole on the cheek, old issues remain unconquered. So, from the peddling Jewish guy, she gets a bottle of hair dye in exchange for a sandwich. The only issue is, what she thinks is black dye may have been blue, and when she mixes it with something else to wash out her hair it turns it green. Leading to quite the fit and Marilla, upon discovery, agreeing with Anne it needs to be cut off. 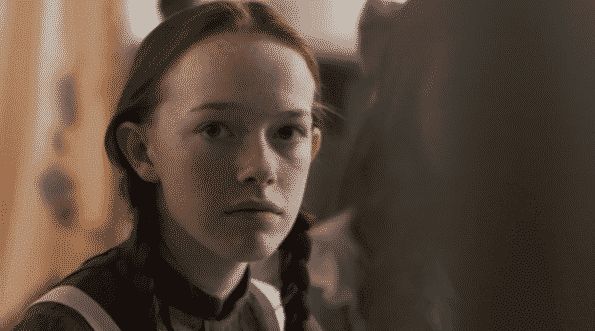 With Gilbert back, it does lead you to wonder if old feelings for him may conflict with new feelings for Cole? Even if Cole and Anne have not really made it clear there is any romantic interest. Because there is a sense of comfort when it comes to Cole and Anne’s time together. They don’t complete, they empathize and can actually talk. With Gilbert, Anne is challenged but is that what she wants in a potential beau?

Potential love triangle aside, I’m glad we got a small glimpse into Josie’s life. Being that Anne’s bullies have been rather one-note, getting to see and understand the source of them being butt heads was a treat. Not to say we couldn’t gather ourselves it was local culture, how redheads are seen, how orphans are seen, if not how parents raised their children, having a definite over theories is always a kind thing to give an audience. Now if we could just learn Billy’s issues. Which better not be some basic explanation of him actually having a crush on Anne but she makes him feel dumb so he teases her.

[…] if a kiss is such a big idea, then why is it such a small word? It should be long and difficult to say. – Anne