The Plan for Both Sides: Diethard

There is an assumption that peace will be realized not that the anti-peace forced that were in Ctrigall have been suppressed but, in truth, that was a ruse. Isidora, alongside Brigadier General Merkulov set up that situation to put the south at ease. However, with 1041 rebel soldiers, seemingly mostly from POW camps, they have enough people to strike back.

But why would they harm peace? Well, embarrassment. The way Merkulov lays things out, not only is he personally embarrassed by Gardarik’s loss, especially at the battle of Intense but also embarrassed by his country. Whether it is how they see their veterans or them bowing to the south and doing as told, he wants to regain his, and the country’s, former glory. Even if it means additional bloodshed. After all, as a soldier, what other way does he know to make his country proud.

So, as the south sends a special envoy, and some of Claudia’s dolls north, they plan to strike the railroad, which has taken over 10 years to build for some of it. Thus bringing in Diethard for while the army has been disbanded, strangely the navy hasn’t and since Major Gilbert is dead, it seems the next best thing is his older brother to protect the envoy.

Speak of a person and so they shall appear. With Diethard still dealing with his brother’s death, and blaming Violet, speaking with Cattleya flares up some emotions. Especially as she paints Violet to be more than a murdering tool but a very good doll. But things really come to a head when Violet shows up after seeing fires and signs of explosions alongside the railroad tracks.

With her report, Diethard is on edge but with seeing Violet’s face, so returns a deep-seated anger. One he unleashes later on. 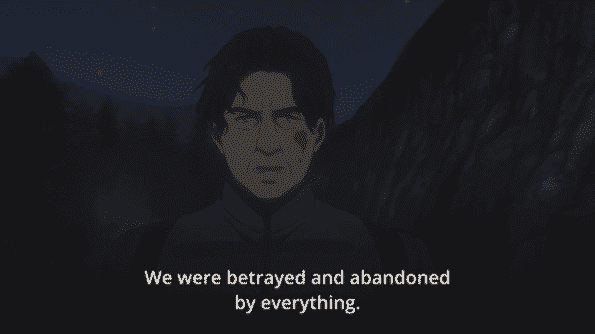 After infiltrating the train, the rebels make sure to split the soldiers, who for some dumba** reason are in the back of the train while civilians are in the front, from one another. Thus giving at least one or two dozen of the rebels control as the soldiers veer off onto another track. However, what wasn’t accounted for was The Maiden of Leidenschaftlich and Diethard.

But, unfortunately for Diethard, but fortunate for Merkulov, Violet refuses to kill. In fact, as she finds herself battling people on top of the train, she saves one from slipping off and gets injured in the process. All of which pisses Diethard off for this murdering tool refuses to live up to her purpose. So once Merkulov and his right-hand man Isidora are handled, there is a shouting match. One in which Diethard blames Violet for not saving his brother and says she basically killed him because of how inept she is. Of which her only reply is to say she did try and when Isidora goes to kill Diethard, she tries to make up for not saving Gilbert by saving Diethard. Though, considering whatever Isidora shot causes an explosion, it isn’t clear if said explosion was big enough to do damage.

Putting The Past In The Past 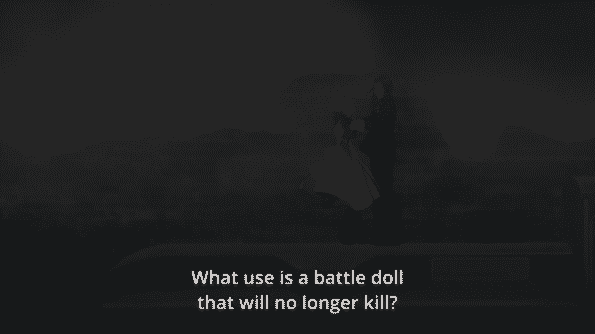 There is almost a sort of Pinocchio story when it comes to Violet. At one time she was a tool, an actual doll, who based off Gilbert’s movement was a murdering machine. Yet, with a name, and being allowed to become a real girl, borderline woman, so comes her learning what it means to be human, having feelings, some form of empathy even.

Yet, as gone into by many who focus on self-improvement, there is an issue with you moving forward and people only knowing you from when you were at your last destination. Which is the problem between Diethard and Violet. All he knows is the tool, has some information about her life as a doll, but this person Cattleya touts her to be is foreign.

But it could very well be, with her saving his life, his opinion of her may evolve. And with that, perhaps he can help Violet complete her transformation. For, at least in my mind, part of Violet’s evolution includes those who saw her as a tool or murdering machine seeing her as something more. So with Diethard in particular, him recognizing her growth and maybe even, dare I say, opening up to her, it may allow them both to reconcile what happened with Gilbert and talk about both of their experiences with him. Violet in terms of him being like a father figure, older brother, or perhaps first love, and Diethard as an older brother, friend, if not someone who he took care of like a son.

For most shows, at least ones I’ve watched, either we watch the build-up to the war or are in the heart of it. What isn’t necessarily addressed is how complicated keeping peace is. Especially considering there will always be those, for various reasons, who don’t want peace. Be it ego, the way the loser is treated, how a company got defeated, and etc, it is immensely complicated accepting the ultimate result and while the Gardarik rebels aren’t providing a huge amount of nuance, there at least is enough given to understand their point of view. Especially in terms of Merkulov and his experience with being treated after the war.