Violet Evergarden: Season 1/ Episode 11 “I Don’t Want Anybody Else To Die” – Recap/ Review (with Spoilers)

The Gardarik rebels slowly come into focus as Violet has to go into a battleground to deliver what may be one soldier’s final message to his loved ones. Leading you to wonder, will they inspire old Violet to come out?

As has been noted as a background fact, there are some on the Gardarik side who aren’t happy with the war being over. Probably because of the way it ended with Violet and Major, among others, infiltrating an HQ and embarrassing the hell out of them. What surely some see as sheer luck. Hence why places like Ctrigall and Camp Menace exist to make it so the Gardarik refugees who want revenge can perhaps be contained.

Leading to this week’s assignment which is having a doll head to camp menace to write a letter. It will be for a soldier named Aidan who wants to write a letter to his parents and childhood sweetheart. Something Claudia isn’t much for risking his people over, nor Cattleya, but Violet decides, on her own, to take the job. It has become clear Violet is seeking atonement. Yet, with the events of this episode, her going into a war zone, it did push the idea of whether anything she sees could trigger her into becoming the old Violet. Much less, taking into consideration the job is all she has to live for, whether she would live or die for the duty just like when she was a soldier. Hence her not discussing going but seeing a mission to be done, that the rest aren’t really able to do, and just snatching it.

The Maiden of Leidenschaftlich: Violet

Going into a war zone, as you can imagine, is difficult enough for a soldier. Violet going in, with the dress she wears everywhere, and seemingly doesn’t have an alternative to, heading in is quite strange. To the point, naturally, people talk about not being able to protect her for, if you haven’t noticed, there aren’t any female soldiers, or veterans, besides her (though correct me if I’m wrong). Yet, with Violet seeming down for anything to complete her job, she finds a postal pilot willing to drop her off in enemy territory.

Leading to Violet saving her client Aidan. I’m talking, tapping into old, I’ll massacre your whole platoon Violet and one of the leaders of the rebel forces even recognizes Violet and tells his people to back down. While it seems her allies may not remember who she is, her enemies know of the Maiden of the Leidenschaftlich. 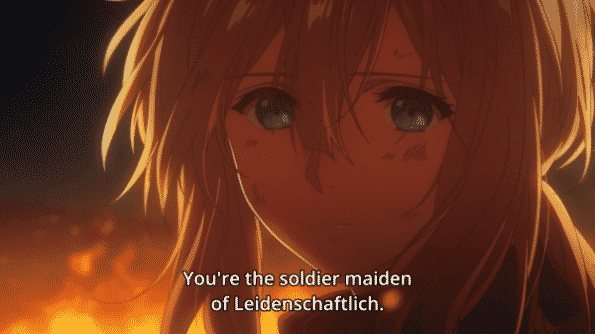 I truly though Violet was going to kill all of those people out of revenge but then I remembered her breakdown a few episodes back. One in which she realized how many people would receive letters saying their father, uncle, brother, or husband died. So, with that in mind, you can understand why, despite clearly being willing to murder other people, even on the verge of killing her, she just did what she had to in order to save Aidan’s life.

But, you got to admit, the fact she was so legendary this random, no name soldier of a rebel faction recognized her and said that, even as a group of +5, they couldn’t handle her, was a moment. Really reminding us that, don’t let the dress and her now being more emotional fool you. She was trained to kill, disarm, and probably dismember and can flip that switch if she needs to.

Being that Violet was trained to kill more than save, there isn’t much she can do for Aidan besides write his letter – which she personally delivers. Leading to, like in the last episode, her crying. 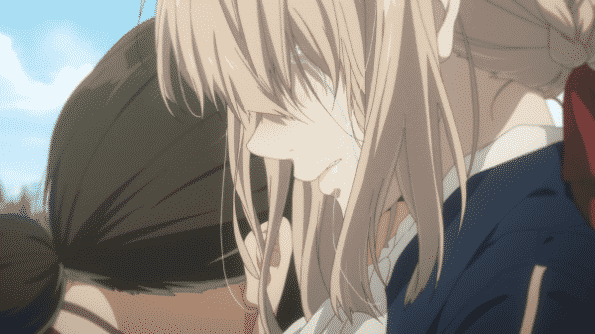 I strongly believe Violet is seeking some way to make up for all the people she killed, the families she robbed of loved ones, and the letters that never got sent. Which, a part of me believes, with the situation with Aidan, could very well push her to return to action. If not as a doll for soldiers in dangerous places, then maybe returning to combat as a full-fledged soldier.

Which I say because, again, Violet doesn’t have a life. All we see her do is go job to job, and often times gets to the point as soon as possible. She has basically treated her new life as if she is a civilian soldier. So with that in mind, I feel like she is going to find herself in a series of escalation of trying to figure out how she can do more for Claudia and keep herself busy for as long as possible. For, let’s face it, if Violet was to sit down and examine her life, she’ll find it is voided of meaning.

The doll term maybe for marketing, but that is essentially what violet is. When Claudia wants her to be useful, off she goes with imagination and wonder but if not needed, I’d imagine she sits in the dress she wears every day and just stares off into the distance. Maybe modify her hands, but otherwise just exists. And in that silence will come the memories again that only stopped flooding Violet’s mind because she was given a task. Making it so, for this 16 or so year old to do like a full grown adult, go to work, eat what you can, and go to bed to do the same thing the next day, is almost as depressing as the people she writes for.