The Ancient Magus’ Bride: Season 1/ Episode 22 “As You Sow, So Shall You Reap” – Recap/ Review (with Spoilers)

We dive into Chise’s past and through her getting to understand her mom, it seems that may lead to the path of her reconciling with Elias. Maybe even understanding Joseph.

We have gotten hints and glimmers of when things were actually good for Chise. When it was just her, her mom Chika, father Yuuki, and little brother Fumiki. Then things were good. Her mom, like her, was a sleigh beggy but her dad would fight off those tempted to mess with his family. And with that, her mom was able to present the idea there truly was nothing to fear. Yet, with seeing a black shadowy cat, and thoughts still unexplained, Yuuki packed up Fumiki, seemed tempted to bring Chise too, but ultimately decided to leave her and her mother and never return.

We still remain without a complete answer to why Yuuki left. Was it just because he got tired of dealing with various kinds of apparitions? If he was able to see and grab them, doesn’t that make him a sleigh beggy too? Doesn’t that mean he is cursed with facing them his whole life, Fumiki as well? Wouldn’t it have made more sense to stay with his wife and daughter? Especially knowing how frail Chika is and Chise being a child?

But, then again, who knows if Joseph, if not another being like him, took over? Sadly, this is one essential question to Chise’s past that goes unanswered.

With Yuuki gone, Chise can’t be this frail and hopeless thing anymore. She takes on multiple jobs, I could at least 3, and works herself into going from broke to just in poverty. Then, one day something whispers to her about it being Chise’s fault. Why not kill Chise? It isn’t clear if this being might be the same which may have convinced Yuuki to leave or not, or if Chika just had a mental breakdown. All we know for sure is it’s influence led to Chika choking Chise until she snapped out of it, saw Chise breathing once more, and the guilt pushed her to suicide. In past episodes, it was made clear that Yuuki abandoned Chika, but what wasn’t filled in was what happened between that happening, the abuse, and suicide. My theory was, especially before we learned the whole family could see apparitions, is Yuuki left because of Chise, Chika blamed Chise, and was abusive to her to deal with being stuck. To the point, eventually, she killed herself to get away from Chise or an apparition, one of the friendly ones Chise dealt with, maybe caused her mother to kill herself.

Well, that wasn’t the case. The stress of being a single mom hit Chika hard, as well as the, strangely not noted, having her baby boy kidnapped with probably no means to find Yuuki. Leaving us with a more understandable mom for, just imagining struggling money wise, and then apparitions messing with you, trying to eat your child, and everyone probably thinking you are crazy, it is easier to understand why she ultimately snapped.

The reason why Chise had to go through all of this was to hold up her end of the bargain. Joseph seemingly is desperate for a way to die, or perhaps figure out some means to evolve, and he needs Chise’s dragon cursed arm for that. But, before major surgery, he decided the two needed to swap eyes. So he pops out his, takes hers, and has them switch – don’t ask how that worked for they don’t tell us.

But, while Joseph’s cursed eye forces Chise to relieve all these memories, it also produces this fragment. One which asks for something, maybe to kill Joseph or force him to remember his past – if not true form. It isn’t 100% clear what this thing wants but the next episode should answer this.

What perhaps matters the most is Chise’s conversation with her mother. Similar to how Chise has conversations with Nevin, despite being in the afterlife, it may very well be that Chise got to have a very frank conversation with her mom. One which acknowledges all the pain and what she did, but doesn’t let that erase the good times or the fact she found it in herself to let go of Chise’s neck. Because of that, she has met many wonderful people for that she thanks her. Doesn’t forgive, nor forget, but has at least reached the point where she can say, if Chika didn’t do what she did, the life Chise has come to appreciate wouldn’t exist. 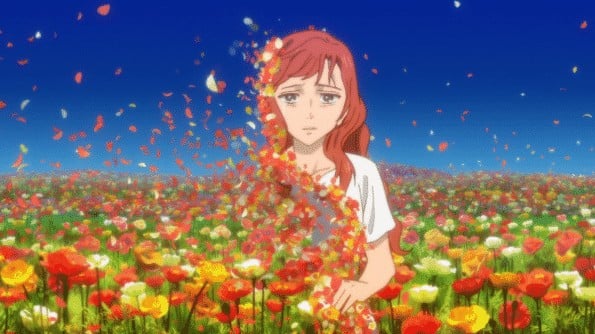 I wonder, in a way, if the fragment wants Chise to do for Joseph as she has tried to do for Elias. That is, help them find, and/or regain, some sense of humanity. For all of this, despite it being Joseph’s way of torturing Chise, also seems like a test. For back when he was battling Renfred, Elias, and Alice to a point, it was clear that Joseph would like to die or at least that was the vibe I got. So with him keeping a careful eye on Chise through Stella, and perhaps the others who have attacked or been part of her life, maybe he wants her efforts to be used for him.

After all, you have to assume that a lot of these sick experiments of his are either born out of boredom or trying to figure out a way to dispel his curse. If not drown whatever pain and sorrow he is in. Hence him treating himself like he is Mr. Potato head. To escape whatever it is in his past which haunts him, he is building an entirely new person and, as the fragment noted, he has come to a point where the people or person he was is suppressed and all that matters is the pain.

Pain which we seemingly we’ll uncover in the remaining episodes.

I won’t forgive you. I won’t forget you yet, but I’m going to leave you and move on.