Lady Elza faces off against the super drags and, before the episode is over, we learn who she is out of drag!

Despite their speed and getting Goldiva into her dressing room, thanks to the super drags being cocky, Lady Elza gets the opportunity to suck away everyone’s highlight. This leads to her becoming HUGE – bigger than the stadium even. Making it so all of the super drags powers and actions mean nothing. So, one after another, they get defeated. 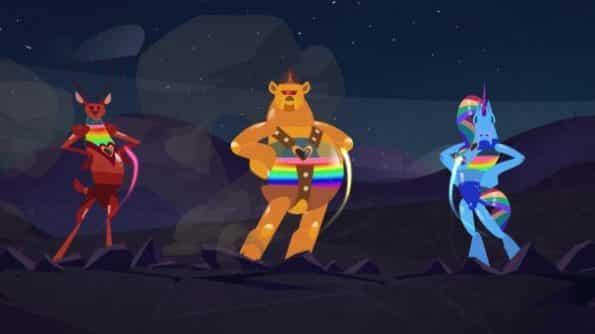 With fighting and defeating the super drags comes one last target: Goldiva. Someone who already hit the stage and is drawing from the massive amount of highlight in the world to not just revive the audience but also the super drags. Who, with sacrificing themselves for their sisters, even refusing to become minions to Lady Elza, get to become their Necas.

Leading to, after some back and forth, them defeating Lady Elza and her falling off a cliff.

But, before the episode ends, it is revealed to else Reverend Sandoval is Lady Elza! Called it. Considering how rarely we saw Reverend Sandoval in the show, with him being the closest thing to a villain on it, him not showing up much seemed weird. So him being Lady Elza isn’t a surprise. Plus, you know the old saying, which isn’t always true but sometimes is: Those who are the most homophobic are probably self-hating homosexuals. Though, for what we know, Sandoval may just appreciate femininity and might not be gay? The show addressed ageism, gender expression, and coming out, so who is to say it may not expand what it means to slay – whether part of the LGBTQIA rainbow or not?

It should also be brought up that, apparently, Champagne knows more than she has been letting on. So has she known, all this time, who Lady Elza was but didn’t want to out her? Could it be that maybe, like with Goldiva, Champagne was a mentor of some kind, maybe competition, for Sandoval but because Champagne didn’t invest in her she became evil? Wanted to end Goldiva’s career because she thought she was the talented one?

Heck, could it be, if they wanna humanize Sandoval, he was a late bloomer and the fact he got rejected because of his age and looks, that made him evil? Maybe he saw the world around him and knew what coming out would do, so he decided to oppress himself and be envious of those who could be out and proud? Much less, knowing the truest form of his expression would mean losing it all, is that why he wanted all the gays to lose their ability to freely express themselves?

If the show wants, they can make Lady Elza an envious queen who the super drags, maybe even Goldiva, can feel sorry for. But, considering she is the only villain on the show right now, here is hoping they don’t take it too far. Even though there is that shadow group we haven’t seen much of.