Super Drags decides to get a bit serious and confront the beauty standards and respectability which make being queer difficult.

Dating While Queer – And Not Thin, Young, And A Head Full of Hair: Patrick

Patrick isn’t like his friends. He isn’t like Ralph who is a big dumb, jock-ish, twink or Donizete who seemingly is well-endowed. Patrick is a big guy, balding, short, and also feminine. Making dating a bit hard for him, especially on apps.

So, after a rather embarrassing dismissal, he decides to go out in drag but in a masculine way. Meaning he binds his fat, put on a masculine wig, deepens his voice, eye color, and uses pubes for a beard to be masculine. Something which works but then the guy is trashing those who don’t look like them. He goes after feminine men, women who are too masculine, and blames them for holding them back – likely in straight people’s eyes. Leading to Patrick never minding all these changes if this is the way these guys really are. 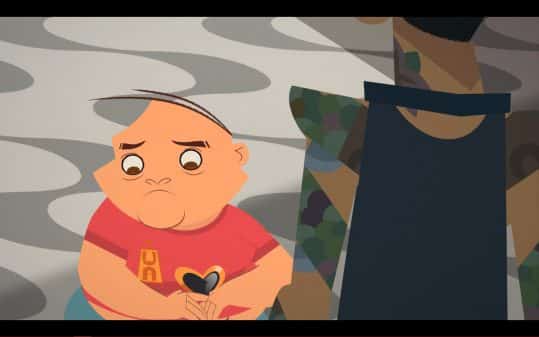 There is a lot to be said here about what Patrick said and also how his dates reacted. Addressing Patrick’s cultural critiques, you have to take note that when it comes to gay men like Patrick, they aren’t often seen – especially as romantic or sexual possibilities. At best, they can be the funny best friend and, like heavyset women, them being with someone, especially someone seen conventionally attractive, is treated as a joke. But, the truth is, those who lack confidence, aren’t someone big and funny, they get passed over. Which, in a community that already has so many external forces trying to oppress, dehumanize, and more against it, feeling isolated amongst your own people feels like the last straw.

Yet, there is something to be said about what the doctor speaks of as well. Specifically, the lack of diversity when it comes to the depiction of queer people – especially outside of web series hosted on YouTube and similar platforms. Though the doctor said and went about it in a way completely uncalled for, you have to note that the majority of gay characters we see are feminine and sassy. Be it in the aforementioned gay best friend way, or just someone who pops in, gives a few lines like Donizete does, and sashays away.

Which is all to say, as diversity reaches a new level in making sure people who can be labeled, Gay, Black, Latinx, etc are seen, there is also a need to dive deeper. Be it showing heavyset and awkward gay men, feminine queer women who are aggressive, and expand the number of blueprints put out there. For, unfortunately, there will always be the issue of having to be some kind of role model. Whether you are a faded Black person, heavyset, femme, masculine, whatever, there is a need to show each kind of person is able to live a fulfilling, and loved, life. Otherwise, they can either become like Patrick, a bit insecure, but maybe still hopeful, or possibly dead.

For this episode’s mission, Lady Elza employs a robot to help her. One which takes a picture, with its phallic lens, then excretes a picture. One that Lady Elza sucks the life out of. Now, thanks to Champagne’s Dil-Do, it was originally assumed you needed looks to be of use in this mission. However, we learn it is actually confidence. Leading to, until Champagne gets in contact with the rejected Patrick, Ralph and Donizete getting their asses handed to them.

However, once Patrick gets involved, as Lemon, of course, they defeat Lady Elza. However, as with episode one, they don’t get back everyone’s highlight. I’m kind of confused by Lady Elza. Does she work in the same mall but a different store? Do they maybe know her outside of their drag personas? Because, with Patrick directing his app date right into Lady Elza’s lair, she has to be closer than we think right? Like, for example, does she work in an electronics store, hence all the machinery she has and the monster she creates? Maybe is a temp who bounces from store to store when someone is out? I’m just trying to understand what is going on here.

This Call Is Being Recorded: Goldiva, Reverend Sandoval

For a good portion of time, it seemed like Goldiva might have been two-faced and was working with Reverend Sandoval. Maybe cluing him into how the Super Drags’ headquarters worked and where it was located. In truth, she just wanted some privacy to attempt to talk to him. However, by saying one line about wanting to destroy and do vile things, this attempt to make peace backfires and Reverend Sandoval uses those words to scare the populace.

Raise your hand if you thought this show wouldn’t be this serious. We got body dysmorphic issues, dating problems, how religion plays a role in gay people being oppressed, and also those like Jezebel who use 3rd parties to speak for them. Just so they have a bit of a buffer to protect them. Ain’t that something?

Speaking on the topic at hand, considering how big Goldiva is, why doesn’t she have someone, like the lawyers she mentioned, speaking on her behalf? Why is she directly confronting Reverend Sandoval, by phone at that? I get, for the sake of the plot, it works, but there is a serious need to question why a superstar would take this path?