Part of the episode features what happened in episode 1, but from Roxy’s perspective, before shifting us back to Rudy who ends up liberating those held with Ruijerd. A dwarf who is a member of Roxy’s party who is assisting her with finding Paul’s relatives, and he, alongside Elinalise, were members of the Fangs of the Black Wolf.

A very promiscuous elf who is assisting Roxy with finding Paul’s family members, despite having a sordid relationship with Paul during their time together as part of the Fangs of the Black Wolf. 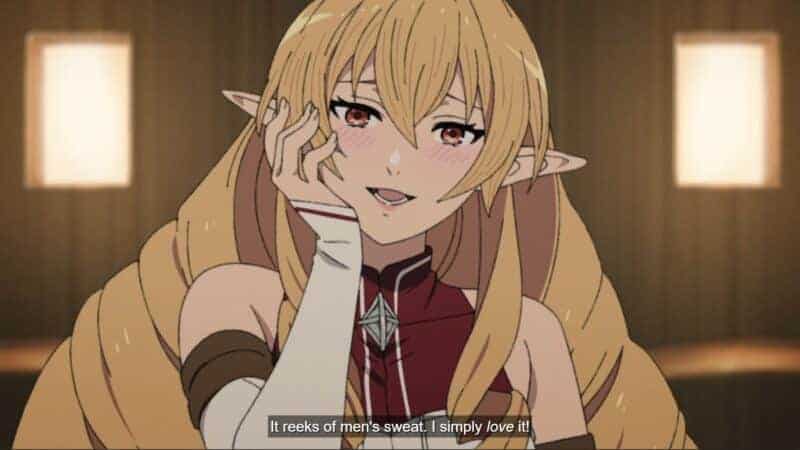 The trip to the Millis Continent was rough, mainly for Eris, who gets seasick. So, for most of the episode, she is absent as Rudy goes to get Ruijerd from where the smugglers hold all those who were transported. There he learns Ruijerd isn’t for the idea of just being picked up and leaving. There are beast children there, and one recently died, so he wants to liberate them.

This, originally, makes Rudy uncomfortable, but with the people there being thieves and smugglers, he sets his conscience aside and helps. However, in doubling back for a dog that isn’t a humanoid, Rudy is captured by beast people thinking he is a smuggler, and they take him to their village.

Not Being Frustrated By Roxy Missing Rudy

I’m cool with them prolonging Rudy and Roxy reuniting. Right now, Dead End, and Rudy’s journey with them, trying to get to the human continent, will probably be far more interesting than anything Elinalise, Talhand, and Roxy can bring. Plus, there is hope that we’ll see Roxy in action with her new party as we’ve seen with Dead End. And if Roxy discovers Rudy, what reason would there be for battles, unless they run out of money?

While this leads to a side quest, one of the things we’ve always loved about Jobless Reincarnation is that it isn’t just about the lead characters, but the world they live in. So to learn about Beast culture, the people, and their plight, it should be rather interesting. For while Rudy is mainly known and seen as a perv, there is no discounting that he is also a scholar and the information he’ll gather will be of great interest. Mushoku Tensei: Jobless Reincarnation: Season 2/ Episode 2 “Missed Connections” – Recap/ Review (with Spoilers)
Trajectory: Plateau
While "Missed Connections" more so sets up what is to come, and follows what happened to Roxy when she was going back and forth, it is still a quality episode that pushes things forward.
Highlights
Not Being Frustrated By Roxy Missing Rudy
The Beast People
Disputable
83
You Might Be Interested In