Will Rudy rue the day he asked for a job to pay for him and Sylvie to go to university together? It all depends if he can win over his cousins.

The Reason For Paul’s Knock Out – Ghislaine, Rudy

So why did Paul knock out Rudy? Well, because he is to spend the next 5 years, meaning he won’t return until he is 12, in Roa, with one of Paul’s cousins. Mind you, on top of that, he isn’t to return home to visit or write, furthering the idea Paul didn’t want Rudy to influence his younger siblings. But, that’s just our assumption.

What is stated as fact is Paul definitely wanted Sylphie and Rudy separated, for they were becoming too dependent on each other, and Rudy admits it. Oh, and just to throw some ecchi in there, Ghislaine has Rudy read the letter of Paul explaining everything, and it includes that Paul calls dibs on Ghislaine and implies he already had sex with her. To which Ghislaine just looks to the side when that is spoken.

So, where has Ghislaine escorted Rudy? Well, the place where she is the bodyguard and sword instructor, which is the home of Rudy’s cousin Philip. Someone who is a Lord, and thus Rudy is tasked with keeping up with customs and does well. 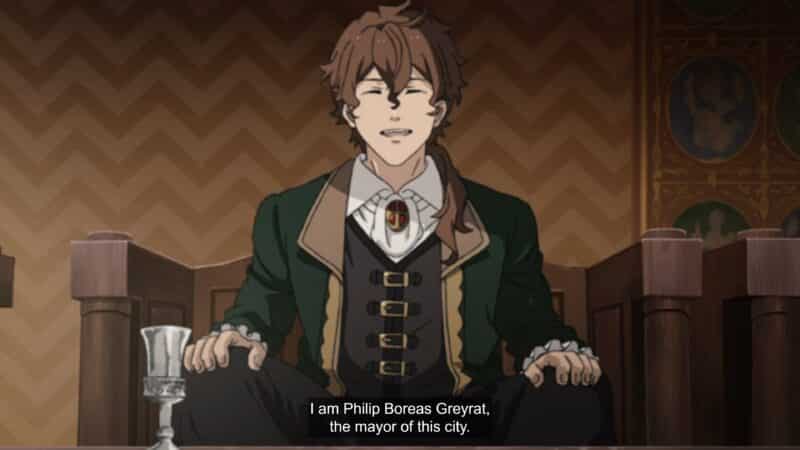 However, winning over Lord Philip isn’t why Rudy is there. Rudy is in Roa to tutor his spoiled older cousin Eris who is 9. Someone who smacks him for talking back, and when he hits her back, she whoops his ass. Thus forcing him to use magic to send her flying and him running with his tail behind his legs for this only makes her angrier.

With catching hell from Eris, Lord Philip assumes Rudy will quit but instead, he concocts a plan to get him and Eris kidnapped and earn her trust in the process. This was a decent idea, but at times it went a bit far. Be it a man kicking Eris’ teeth out or Rudy nearly getting killed. But, before Ghislaine rescues them both, Eris learns to forego control over a situation and rely on someone who isn’t paid to do as she says.

Thus, Rudy earns his job, which he may regret having if it is ever revealed he planned the kidnapping which opened the door for his and Eris’ relationship.

I’m not going to pretend the introduction of Lord Philip or Eris deserves a glowing review, even though both had their comical moments. However, considering how Paul has talked about his dad, it is a gift to meet his family since meeting someone’s parent is one thing, but their cousin? It’s like Rudy says, it is a strange thing.

For us, what makes it strange is that, in anime like this, which sprinkles ecchi, action, world-building, and character-building, usually the family isn’t a top priority as the lead is usually an orphan. If not aware of just one parent, and that is the sum of their family. With that said, I’m mostly interested to see how Rudy learns from them more than who Lord Philip and Eris are. That is unless Eris evolves beyond your usual tsundere.

With the introduction of Rudy's extended family, including a very violent older cousin, this is a rather tame, lowkey boring episode. Yet, considering it took 5 episodes to get to an episode of this caliber, we're going to write this one off as a transitionary episode.