It’s an emotional episode as Rudy runs into people who haven’t been on his mind, but they have long thought and worried about him.

Dead End enters Millis’s capital, and Rudy plans for them to stay awhile to build up their money before heading to Asura. But, as Eris and Ruijerd enjoy some time off, Rudy believes he sees someone getting kidnapped, so he heads out. This leads to him confronting the kidnappers, with a woman’s panties on his face as a disguise, and handling most of the kidnappers with ease. However, that is until someone who clearly is a masterful swordsman steps up, and it is revealed it is Paul – Rudy’s father. It has been a year and a half since Rudy and Eris teleported to the demon continent, and in Paul’s mind, it seemed he knew his son would be okay, so he sent word of what happened to his mother, his sibling, and Lilia. However, what he wasn’t expecting was Rudy to be traveling the world and not taking on the burden of worrying about his loved ones. This pisses him off, and Rudy tries to counter, but all this does is make both sides mad to the point of fighting. Which, with Rudy having a demon eye that gives him foresight, and magic, he actually gets the upper hand on his dad.

In fact, it gets so bad that Norn, Rudy’s younger sibling, has to get involved, and everyone looking at Rudy triggers him. It reminds him of his old life and how things were in high school, so this shifts Rudy’s plans. It makes him want to leave and not look back.

It Was A Hard Day – Rudy, Eris, Ruijerd

Rudy really was shook by his confrontation with his father and goes back and forth in his head whether he should try to mend things or just leave. This is the state Eris and Ruijerd find him in, including with marks from his father with Paul. Eris is ready to fight, even kill Paul upon hearing it was her uncle, but Ruijerd stops her.

For one, this cannot be solved with violence, and two, while Eris is Rudy’s family, Ruijerd believed this should stay between father and son. So, Eris is tasked with comforting her cousin, which she isn’t good at but tries. And with a hug and encouraging words, she succeeds in making a bad situation better. 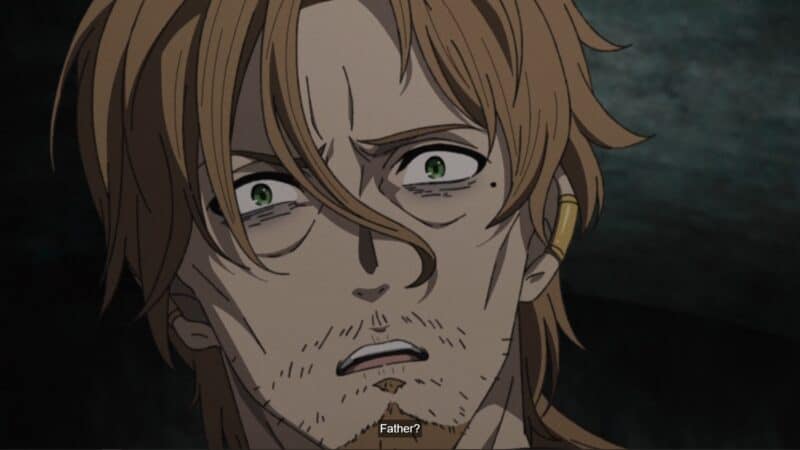 I don’t know why, but I found their reunion emotional. Maybe it is because their father/son relationship has always been so complicated, and now it has only gotten worse since Rudy can defend himself? Because that was Paul’s last thing. He wasn’t smart enough to teach Rudy, but he did have two things over him: Knowing how to talk and be with women, alongside combat. However, Rudy has now whipped Paul’s ass, and while Rudy is still a virgin and a creep, he could probably get a girl if he wanted to.

Heck, add in Rudy is now protecting people and doesn’t need protection, and it really makes it so Rudy doesn’t need Paul. His firstborn is grown.

However, you can also flip it and take note that Rudy did to his dad what he couldn’t do to his bullies or his own family in the past. He now can stand up for himself, fight back, and maybe that scares him a bit? After all, pieces of the old Rudy have been dying off since the series began, and with taking down his dad, it seems like the only thing which might remain is his love for panties, breasts, and ecchi moments. Which, if Rudy ever gets in a relationship, he might still have his kinks, but maybe not at the level he formerly had when he didn’t have access to intimacy?

There is a serious need to applaud Eris’ growth. She has shown her ability to make friends out of strangers, and with Rudy, she may have struggled regarding how to comfort him, but she tried and seemingly succeeded. She learned how to both protect and nurture, and through being with him a year and a half, it is like every reason you could say she was a stunted human being has dissipated.

Which may help when she discovers how drastically her home has changed. Mushoku Tensei: Jobless Reincarnation: Season 1/ Episode 16 “Family Squabble” – Recap/ Review (with Spoilers)
Trajectory: Climbing
Mushoku Tensei: Jobless Reincarnation has rarely stopped being entertaining. However, when it shifts gears and shows the emotional development of its characters is when you realize how well-rounded it is. This episode pretty much gives you everything that shows why this got a second cour. It has quality action, comical moments, and an emotional element that makes it so you are reminded that we're dealing with people who have gone through a lot. Yet, despite their flaws, it is made clear you should never forget they are trying to survive, grow, and learn how to be better, or at least make it another day.
Highlights
Eris Comforting Rudy
Paul and Rudy's Reunion
Disputable
84
You Might Be Interested In