During the camping trip, Ririna comes to the realization that, as Takasaki and Yukari’s relationship progresses, there may not be room for her. On top of some other things Nisaka, quite cruelly, says to her, it may change her willingness to play match maker.

During the camping trip, after the parents clean the lodges and Yukari fixes the food [note]with minimal help from Nisaka[/note], he looks for the girls who wandered off. Come to find out, they went swimming. Which of course, with him seeing both in their bathing suits, makes him feel like a perv. However, neither sees him in that way so things are fine.

That is, until Ririna slips and hurts her ankle. Leading to Yukari having to carry her. Not by piggyback, since apparently having her legs spread like that is inappropriate. He has to carry her in his arms. Leading to lots of hand to skin contact and some unintentional rubbing. The kind which gives Ririna tingling feelings. I’m talking the kind which makes one feel hot and bothered.

A lot of this episode seems directed at helping Ririna realize what she’ll be losing if she continues to play match maker. One of those things, which I wasn’t expecting to become part of the episode’s focus, is the intimacy of touch. For it has been established that she and Yukari get along pretty well. However, the only time they have been in close proximity, like when he held her, has often been due to a comical accident.

In “Risky Love” though? Now he is touching her skin. Much less erogenous zones like her thighs and just around her rib cage. Places we know that no other boy has touched her. Which causes her to have to push Yukari away by calling him an idiot. For he is starting to make her feel things she perhaps has been suppressing for quite some time.

As you can imagine, Nisaka finds Ririna’s role in all this quite curious. Especially since it is becoming clear to him, she is quite smitten. For be it the way he looks as her dad questions what Yukari wants to do for college [note]Study burial mounds[/note], or even how she speaks kindly of him, it is clear something is there. A potential that perhaps Nisaka is jealous of. After all, he hasn’t a chance with Yukari.

Something Takasaki may slowly be beginning to feel as well. If only because, while Ririna may push her to make out and spend alone time with Yukari, she sees how they are together. Their families are melding and though the two may not share hand holds or lips, the chemistry is there. The way he offered to carry her was a sweet gesture and it seems she maybe losing him.

So, after slipping down a small hill, and him landing precariously on top of her, she just holds him close. For no matter how it looks, the position they are in with her blouse popped open and him between her legs, she doesn’t want to let go. She just wants this dream to go on forever. There was a moment when it really did seem Nisaka would perhaps out himself. Something I can’t wait to see happen just for Yukari’s reaction. For while we’re being introduced to a growing number of queer characters in anime, they still are a bit of an anomaly. If only in terms of, what I guess can be considered, the more mainstream programs like this. For while Scum’s Love and Fuuka! had queer characters [note] Netsuzou Trap as well, but I don’t know if that maybe the best example. [/note], in Fuuka it was barely a blip on the radar and with Scum’s Love, Ecchan and Hanabi were basically using each other. So with that, you didn’t get to really see them be friends with the person they liked, get to spend quality time with them, and even really want to have your fingers crossed their focus of affection would choose them.

However, a small part of me wouldn’t mind seeing Nisaka happy with Yukari. It would be quite a twist, but a welcome one. Though, let’s be real, Yukari’s internal dialog isn’t even hinting at the idea he could have an interest in Nisaka. If anything, he is worried maybe Nisaka likes Takasaki but it being polite about it. Not pursuing her as he would wish just because he is friends with Yukari. A strange idea, for sure, but only because Takasaki has been the one aggressively pursuing going from being close to making out and having him pressed against her. So these insecurities seem a bit weird to me.

If anything, the only one who seemingly should be really worried is Takasaki. For while Yukari likes her, and she knows this, they are still battling stigmas and there remains the guy she gets paired up with. It has been assumed that Nisaka and her matched, but we don’t know that yet. So if it is a third party, how will they react to this? I can’t imagine them going along with what has been in progress like Ririna. So what may that mean for this couple? Will they sneak around, with Ririna trying to distract Takasaki’s partner? Will a swap happen? Or will it be as Takasaki said? Them just having wonderful memories of one another and that’s that? 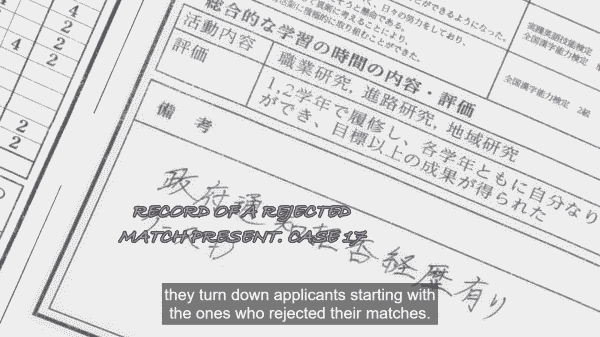 There has been an ongoing question of what are the penalties, if they exist, for not being with your match? Are there fines, social stigma, or anything like that? Well, Nisaka provides the answer. From what it seems, going against the government’s system affects the ability to go to college, maybe even jobs, for it seems rejecting your match has to go on your application. As for fines and things of that nature, that may also exist. Meaning, Ririna playing match maker could screw Yukari over in the long run.

However, the other seed planted is whether Ririna can find someone as good as Yukari for herself. She may get someone more perverted, cruel, and a slew of other things. For, in the long run, she can’t play the 3rd wheel forever. After a certain point, she’ll just be the friend. If that. So, with both things in mine, it seems Ririna maybe stepping things up. She asks about this burial mound noted in a book of hers and it leads to talks of taking a trip to see it. What maybe the two’s first official date – assuming neither invites one of their friends.

Nisaka is so cruel. He knows he’ll likely never have Yukari so he plays with the mind of Ririna. A girl he clearly can see is inexperienced in the matters of love and barely seems ready to dip her toe in. So to guilt her about how she is setting up Yukari for failure on top of setting herself up to maybe be paired with a horrible mate, just seemed like such an a**hole move.

Yet, it might be the kick in the pants Ririna. A wake up call if you will. For after experiencing his touch, and seeing his passion, maybe she now sees the potential to be more than friends with Yukari. I mean, it wouldn’t be so horrible right? They get along and are perhaps the first, for each other, when it comes to dealing with the opposite sex, person who they don’t get scattered brained about. So whether she is already smitten or just going to see what it would be like to truly be with Yukari seems to be the focus.

As for whether Yukari may discover feelings for her himself? Well, you gotta stick around to find out. One thing is for sure though, with the way the episode is narrated at times, it seems Yukari’s final decision was made already and we’re just playing catch up.