Wherever I Look
Recaps, Reviews, and So Much More
Home Anime How Not to Summon a Demon Lord: Season 1/ Episode 1 “The Demon Lord Act” [Series Premiere] – Recap/ Review (with Spoilers)
Anime

How Not to Summon a Demon Lord: Season 1/ Episode 1 “The Demon Lord Act” [Series Premiere] – Recap/ Review (with Spoilers)

Despite its exuberant amount of ecchi, there might be something of value in How Not to Summon a Demon Lord.

Table of Contents show
1 The Introduction
1.1 Other Noteworthy Facts & Moments
1.2 Question(s) Left Unanswered
2 Highlights
2.1 Rem’s Quest
2.2 The Socially Awkward Sakomoto
2.3 It Hard A Decent Action Scene
3 Criticism
3.1 Massive Amounts of Ecchi
4 First Impression: Mixed (Stick Around)
5 Follow Wherever I Look on Twitter, Like us on Facebook and Subscribe to the YouTube Channel.
5.1 Check Out Other TV Recaps

Sakamoto, a young man whose life is playing this MMO game named Cross Reverie, finds himself transported into that world thanks to what is known as an enslavement ritual. One which backfires on the two girls who cast it, Shera and Rem, and ends up turning them into Sakomoto’s slave, under his character Diablo. Leaving us with him tasked with finding a way to undo the ritual as well as help Rem with her curse. That is, the Demon Lord Krebskulm, the most powerful boss in the game, being sealed inside her.

Rem (Azumi Waki): The soul of the Demon Lord Krebskulm is sealed within me.

What might be the heart of the show, if not main means of redeeming itself, might be Sakomoto’s genuine desire to help Rem rid herself of Krebskulm. Much less Rem pushing the idea further that she has serious abandonment issues because, once most people know her secret, they leave her.

In Sakomoto’s awkwardness we may find hilarity and maybe even a sense of him truly being human. For while his desire, or coercion, into isolation may seem a bit much, him putting himself out there could be interesting to see. Especially since he is kind of doing so vicariously, yet is still very much himself.

It Hard A Decent Action Scene

Though Diablo’s fight against Galluk and his salamander was far from epic, it could be appreciated. It was, in fact, the driving point of me watching this and I can’t say I was disappointed. Not blown away either but it is one of the main reasons I’d stick around. 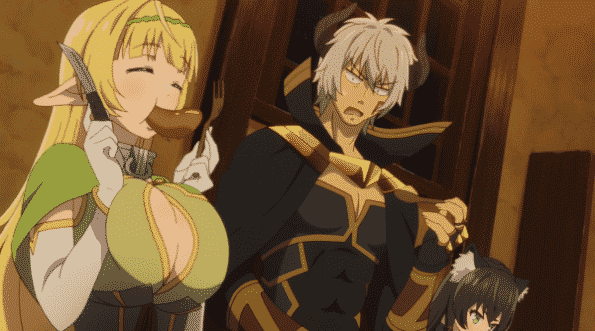 Jiggling breasts are everywhere. Skimpy outfits are what a lot of the women wear and it is neither funny nor tantalizing. It just seems like a cheap gimmick. One it isn’t even clear yet if it is needed to compensate for the story. For while, the highlights I won’t say will sell everyone, they can grow into something which rewards those who stick around. However, they’ll have to get through the gratuitous bouncing, softcore nude and yuri moments, as well as other scenes of ecchi.