Wherever I Look
Recaps, Reviews, and So Much More
Home TV SeriesAnime HoriMiya: Season 1/ Episode 9 “It’s Hard, but Not Impossible” – Recap/ Review (with Spoilers)
Anime

Izumi’s middle school bully is introduced, as well as Kyoko’s developing kink of being treated badly.

Despite reservations, Izumi decides to give into Kyoko’s desires to be yelled at, smacked, and yanked around. Why? Well, we can only assume, as Izumi’s popularity grows, maybe Kyoko wants a deterrent? After all, with her issues with being abandoned by her parents for work, it seems neutralizing the threat of other girls wanting Izumi could be a factor?

Though, it could also be a kink. That thought aside, one person who sees this is Tanihara, Izumi’s middle school bully, who thought he was weird so he harassed him. Now, the two don’t have much, if any, contact, but when Tanihara sees Izumi, he and his friends try to pick up where they left off. However, while Kyoko likes mistreatment from Izumi, she will not allow anyone else to do that to him. So she beats the hell out of those boys and puts the fear of God into them.

While things remain weird between Izumi and Tanihara, at first, Tanihara warms up to Izumi. Why? Well, between owning up to his part in why Izumi was distant from him (Tanihara being the reason the school’s bunnies died) to recognizing he is part of the reason Izumi was isolated, he makes amends. Which, with Izumi willing and desiring peace between the two, while they aren’t bosom buddies, there is a comradery there Izumi would consider friendship.

What led to Kyoko and Izumi’s relationship is she got to see and be with a side of him no one else recognized. She got to see how sweet he was, how attractive he could be, and in return he got to see her as this person who was domestic and a bit of a homebody. However, as Izumi has grown comfortable with her friends and family, she has been forced to share him more and more and now with his hair cut? Oh, now she has to deal with random girls and people like Remi eyeing him.

Hence a sort of twisted relationship developing where she wants him to be abusive towards her. Which, at first, seems like a means to make him seem less desirable than he is, but there might be more to that. After all, we don’t know what the relationship of Kyoko’s parents are, nor what set the parameters for Kyoko to identify what love is? 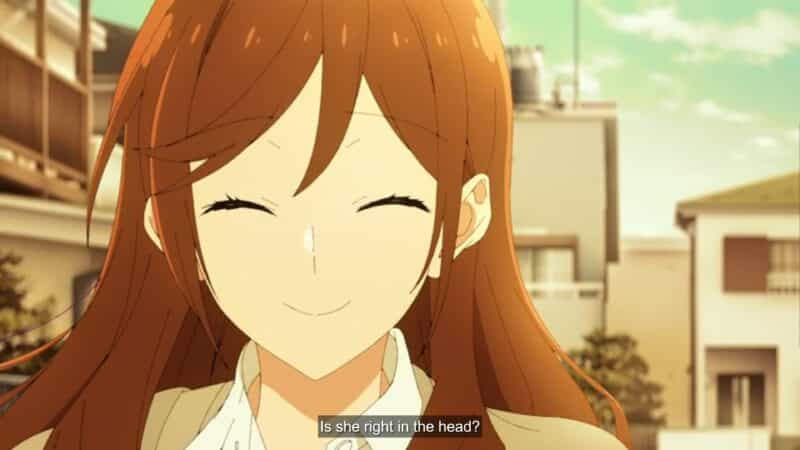 Yes, it is established she loves horror movies, and certainly wants Izumi to be more aggressive, but as for why she wants to be smacked and called a b****? Call it a kink, call it dysfunction, either way it seems all this time spent on Izumi’s growth may need to switch to us getting to understand what’s up with Kyoko?

Understanding It's About Exclusivity - 82%

While Kyoko's possible fetish continues to raise eyebrows, Izumi healing and befriending a former bully is a highlight.