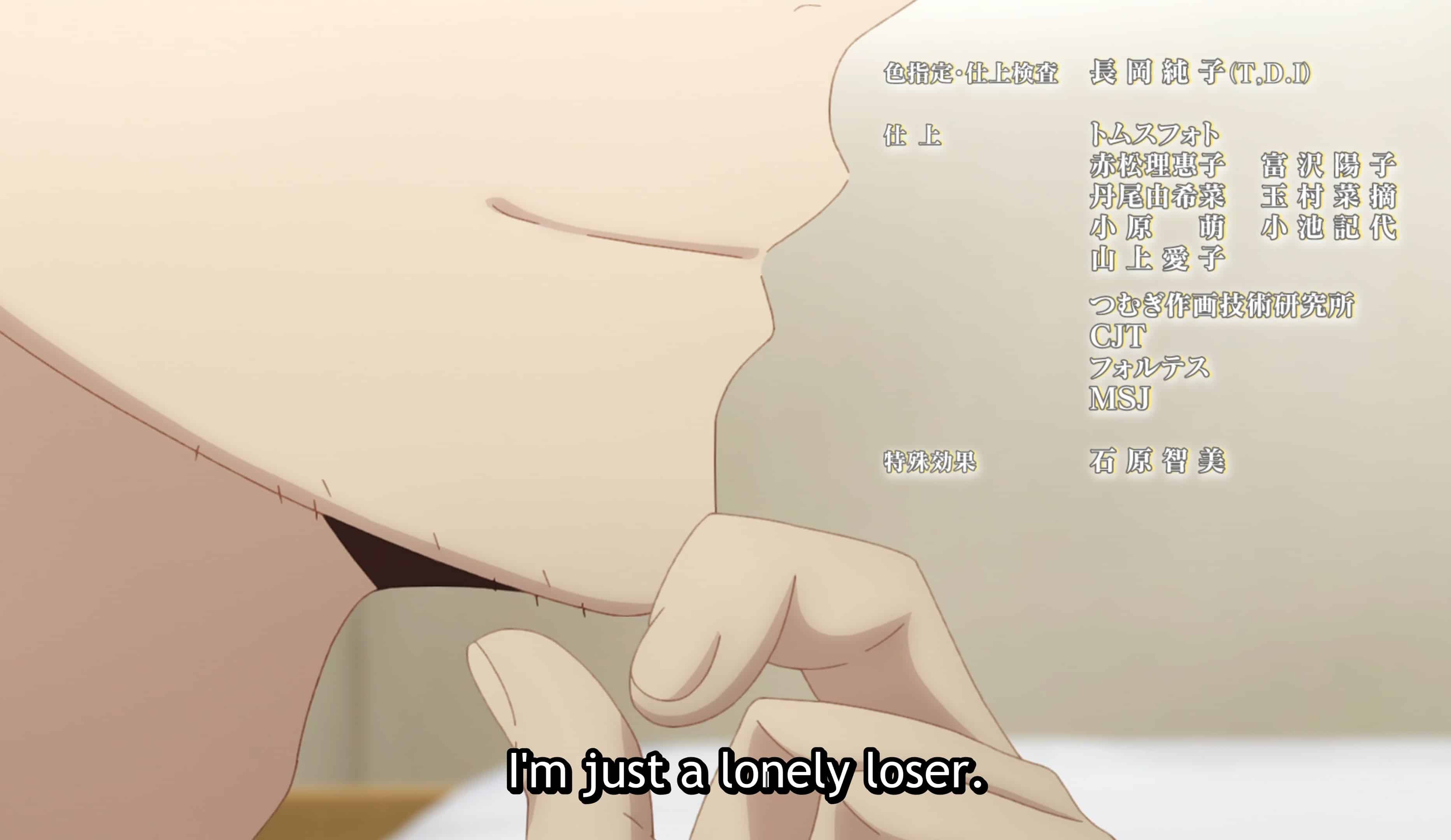 Yoshida saying he is just a lonely loser.

Sayu runs away as her insecurities overwhelm her, and Mishima sees if she and Yoshida could become something more.

So, Sayu wasn’t lying. She has slept with men for a home and even used different names, like Miyuki – which makes you wonder if Sayu is her real name? But, that thought aside, with her main contribution being her body and thinking cleaning for Yoshida can’t be enough, she starts to spiral a bit. This leading to her seeking Yoshida out when he says he’ll be out with a colleague, for she’d rather be prepped to be kicked out than it come as a surprise.

With Mishima being a bit of a romantic, knowing Gotou shot him down, and Yoshida pushing the idea he doesn’t have a significant other at home, she asks him out. Mind you, he didn’t know that this was supposed to be a date, but when Mishima hugged him in a way that wasn’t in a friendly colleague way, he got what was happening and rejected her. Which, to be honest, she takes well.

However, who doesn’t take it well is Sayu, who sees them together and figures her time is up, so she runs to a park. A place that, strangely enough, after being rejected, Mishima ends up at! The two talk, and Mishima reveals she too ran away from home a few times. This may lead you to think we might get a hint as to why Sayu left, but we don’t. At best, she pushes the idea it wasn’t because of her parents. Though considering she has used a fake name before, who is to say she isn’t lying for the sake of it?

Either way, Yoshida shows up and, thankfully for him, Mishima just assumes Sayu is his daughter but does expect a full explanation tomorrow. As for now? She just wants the two to reconcile, which is pretty difficult since Mishima just gave Sayu advice which boiled down to baring herself, and Sayu does just that. She approaches Yoshida in her underwear and tries to seduce him, including touching his genitals, yet still rejected.

Leading to them both putting what they get out of this on the table. For Yoshida, he gets a reason to come home, if not his apartment actually feeling like home. As for Sayu? Well, she gets stability and someone to counter her idea that people can’t be unconditionally nice. At least without wanting something grand in return.

Maybe “Issues” is a strong word, but there is no denying that a young girl like Sayu legitimating having sex with grown men, as if that is the best thing she can offer, raises a red flag. Much less, her thinking unconditional kindness isn’t a thing, also a serious red flag. Which makes me wonder, while she said she didn’t have a bad relationship with her parents, if it wasn’t them, what else could there be to make her take things this far to avoid going home?

It Hurting When Yoshida Rejected Mishima

We don’t hardly know a thing about Mishima beyond her coming off as a sweetheart. However, Yoshida rejecting her was a bit upsetting. Maybe since he seems like a decent guy, she is a nice girl, and so they seem like a good match? Granted, she doesn’t have the cup size he likes, but maybe his trouble is chasing girls with big breasts?

Think about it, out of most of the men you see on shows like this, isn’t Yoshida the one you can most imagine with a girlfriend? So surely he has to be the one getting in his own way. I doubt, considering he has a personality and isn’t mousey, that he is single and alone because no one finds him desirable.

So, fingers crossed, maybe he’ll give Mishima a chance, or we’ll at least see someone recognize how potentially awesome she can be.

It Hurting When Yoshida Rejected Mishima - 82%

As Sayu exposes more of herself, Mishima tests Yoshida to see if a woman must have big breasts to win his heart – of which the answer is, yes.