Gina is back in town and finds a use for the ever persistent Sophie. She may be even gives her the blessing required to become a Makai. As Sophie continues to try to push Sword to commit to helping her learn what is, or where is, El Dorado, she stumbles onto a conversation Gina and Sword are having. One in which, since Gina needs to have a family unit, she does with Sophie as she did with Sword in episode 3. She lies and says the mission can deal with El Dorado, but it doesn’t what so ever.

What it deals with is this woman known as Lady Viola. Someone who, allegedly, has rings which allow her to control horrors. Which, with Gina in this business almost exclusively for the money, attracts her. So, to get close to the woman, who now acts as a consultant for the rich with bad kids, hence the need for Sophie.

The Truth About What We Do: Gina, Sophie, Sword

Someone who, alongside Sword, plays along willingly. Sword seemingly because Gina is a co-worker. For despite her playing his wife in all this, he doesn’t make a single move. Does he stare? Naturally. This is Sword we’re talking about, but he doesn’t even try to hold her hand so, to some surprise, he keeps this all very professional.

As for Sophie, during the party, after being coerced to talk to Lady Viola, she spends time with Gina. Someone who, with her being an opposite of Sword, and Sophie seeing what Sword does twice, kind of questions why Gina is in this line of work. Of which the answer is money. Yes, facing horrors is scary to her and probably exhausting since she is usually in heels, but the money…

Leading to, as they continue their conversation, and hone in on the lives of the rich and famous, including them throwing money at a problem known as their kids, them talking about Sophie’s future. Though they’ve only just met, it is clear to Gina that Sophie isn’t going anywhere. So, while there isn’t an outright discussion about Sophie becoming like her or Sword, there is the question of whether she wants to continue to participate in this life. 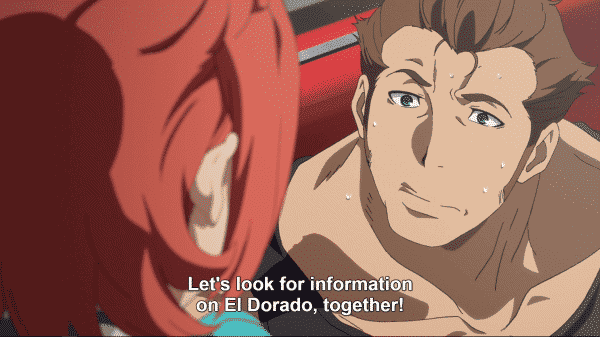 After all, as shown when it is discovered Lady Viola doesn’t control horrors, but is a horror, it means placing yourself often in dangerous situations. Ones in which death is very probable and one mistake could be it. Yet, despite the warnings of what it means to be involved with those like Sword and Gina, Sophie remains committed and continues to pester Sword about El Dorado and helping her find her brother. Likely with Gina’s blessing.

Well, one plus of the episode is we don’t have to deal with watching a woman get beat on by a guy, even if she is the villain of the episode. However, the show still is going at a snail’s pace and not even really dropping breadcrumbs. I mean, was it nice to Gina again? Yeah. But did she contribute anything really? Not at all.

One could say that her giving a pseudo-blessing to Sophie could have been a step forward maybe? Well, at least in terms of Sophie not being kicked out of the diner on a regular basis. But with episode 6 around the corner, of 24 in total, we’re almost ¼ of the way through this show. So fingers crossed, here is hoping it is about time to shift into the next gear.