A new person is made flesh once again and with that may come Stone World’s first human v. human conflict.

The Girl Of My Dreams Sleeps Longer: Taiju, Senku, Tsukasa

While Senku and Taiju are doing fine as the dynamic of brains and brawn, one issue that comes up is that, while Taiju is strong, he can’t fight. So when lions come after them, as much as Taiju would have loved to awaken Yuzuriha, Tsukasa instead has to be awakened. Thus leading to Senku and Taiju gaining the allyship of someone who can punch a lion dead, snatch a bird from the sky, and seemingly kill them easily.

Difference Of Opinion Which May Lead To War: Senku, Tsukasa

Which is something Senku worries about. There is no equalizer in their world, like guns, and while he is in the process of making a crossbow, that may not be enough. But as for what reason Senku would need to fear Tsukasa? A difference in opinion. Specifically, what to do with the adults? 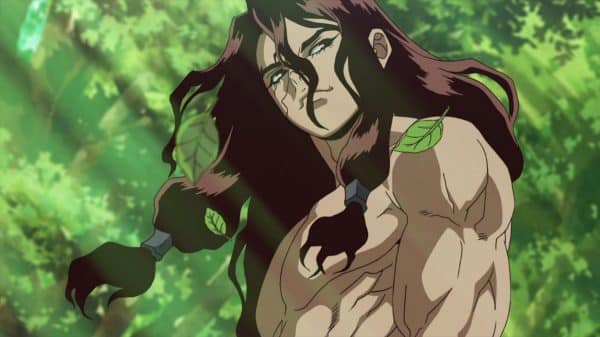 Senku thinks they’ll be of use, but Tsukasa worries they will turn Stone World into the old one and he is against this. He even, technically, murders an adult by breaking their stone figure. Thus making it clear to Senku what Tsukasa is capable of and pushing the need to take their differences seriously.

A man who praises a man to his face is full of ulterior motives.
— Senku

While humanity’s strength comes from when we come together, there is also the issue of humanity’s pride and ego, causing the need to establish difference and dominance. Which isn’t something Tsukasa is pushing, he doesn’t want to become a lord or king. In fact, it seems he hates the idea of the powerful dominating the weak. However, what dictator or authoritarian didn’t begin with lofty goals of disrupting the known system for something they considered better for the people?

As said in The Dark Knight, “You either die a hero or live long enough to see yourself become a villain.” From what it appears, when it comes to Tsukasa’s development, that might be true. The only question is, will Senku be the one to kill him and make him a martyr or allow him to develop into someone strong enough to oppose the civilization he is trying to create?