As Devilman Crybaby finally has Silene meet Akira, we are reminded that with Akira’s body changing, he has certain urges. 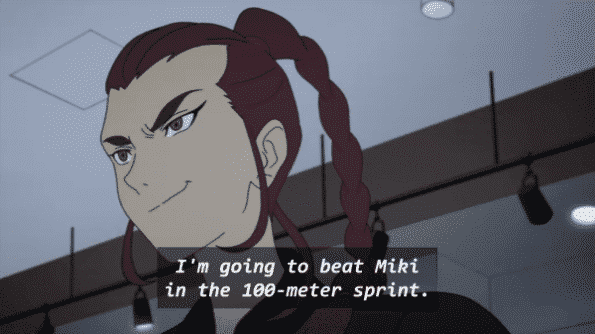 While it seems Kukun, Mayuto, or whatever his name, is likely dead, Miko, on the other hand, got possessed by a demon and is now faster than ever. Thus giving her the confidence to believe she will reclaim her name and her former fame. However, while shopping, Miki appears just as cops are ready to shoot the rap group we have seen for the past few episodes and calms things down. Showing Miko that even if she reclaims the sports star title, her fight to reclaim her name will only begin with beating Miki on the track.

It’s A Little Bit Funny, This Feeling Inside: Akira, Miki

Speaking of Miki, with Akira’s body and bulge being what it is, sexual urges are starting to fuel him to the point he is having nocturnal emissions. The kind which makes it look like a pipe burst over his ceiling. And when it comes to Miki, since she is just one floor below and wearing but one layer of clothing, let’s just say Akira seemed tempted to pounce when he saw her. Especially since, apparently, dude now has x-ray vision and can see through clothes.

Was It Love or Lust?: Akira, Silene, Kaim Luckily for him, however, after Ryo gives him some money, Akira can traverse the red light district and guess who he comes across? Silene. She offers herself unto him but before Akira can get off, unfortunately, she wants Amon to reveal himself unto her. Something that, strangely, doesn’t happen, even as Silene is nude and ready.

So, with Amon refusing to reveal himself unto his lover, she decides to kill his host. Well, attempt to kill his host. For, as has been seen to the point of almost making these fights boring, killing Akira is a challenge. Now, granted, when Silene, on the brink of death, merges with Kaim, they almost kill Akira. However, it seems Silene lost enough of her life so that when the final blow was to be performed, her death caused Kaim and they effectively became a statue. Which I say because not only did they die standing up but also in an odd pose for someone who just died.

The Violence and Sexual Content Are Officially Losing Their Luster At 5 episodes, seeing naked women, down to their pubic hair, thrusting or being thrust, has lost its tinge of excitement and the violence, even someone’s arm getting ripped off, leads to a hunch. So now the focus has to be the story and with how characters have been written off, slowly but surely we are left wondering if this was planned to be a one season deal? Akira’s parents got killed off; Silene and Kaim, the closest things to a villain, outside of perhaps Ryo; and while Miko getting possessed and how that gets handled is of interest, her beef with Miki isn’t enough to drive a show.

And honestly, while I like Akira, and Ryo to an extent, I can only hope with this being the halfway mark, we may meet more of the demons who seemingly rule Japan. For, otherwise, while the idea of Akira taking out all demonkind is sort of interesting, it’s going to get dull unless he finds a serious challenger. One which, seemingly, has to have merged with another demon to truly be a threat.