The psuedo-saint that is Miki is dragged into Akira’s mess and seemingly, he isn’t the only one which presents a threat to her life. 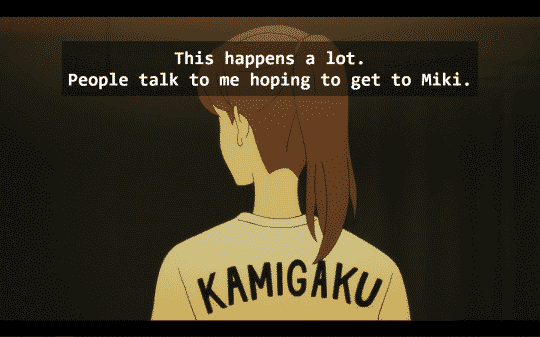 There was a time at Kamigaku high school where Miko used to be the top runner. She was the one being asked about, everyone clamored to talk to, and then Miki showed up. To say the least, she stole all of her thunder and it is really getting to her now. Hence why she took that offer to get photographed by Koji and, from what it seems, she’ll likely end up seeking out a demon, or performance-enhancing drugs, to get her thunder back.

Though likely dedicated to being a pervert, I’m talking a massive amount of photos on his personal computer, Koji really seems to desire to go legit. However, his boss isn’t having it since he seemingly works for Kaim and Silene. Thus leading to Koji getting possessed by a low level demon named Gelmer. One which plans to use Miki, since Koji/Gelmer assumes that Akira is Amon, to get to who they really want.

Now, what isn’t made clear though is whether they seek to bring him to the bosses or kill him. Either way, Gelmer jumps from Koji to Miki, but not after some really perverted pictures are taken, and this leads to Gelmer-Miki trying to seduce Akira when he shows up. That is, after him and Ryo investigating Koji extensively, going to his house and finding the video, with a bunch of photos of teen girls, and then discovering the whereabouts of his photo studio.

Her or Me: Ryo, Miki, Akira Getting back to the point, Miki, who is actually Gelmer, tries to seduce Akira and is completely nude. I’m talking, because this anime is not from Japan, there is even traces of pubic hair [note] Probably TMI, but the shock of nudity hasn’t worn off yet and that up the scales a bit [/note] – that is how exposed she is and, naturally, Akira is shocked. I’m talking so shocked his whole new cool demeanor does not exist and he seems like that dweeb we met in episode 1.

But, after discovering her being nude and embracing him was a trap, he chases after Gelmer and once he corners him, he sucks him out of Miki and kills him. Thus leaving three issues. Two of which Ryo handles, by explosion and a bullet, but now there is the question of what to do with Miki. Ryo is really not for people knowing who he is or what Akira is, so he wants to kill her.

Akira’s opinion? Well, while he doesn’t reveal if it is because he grew up with her, loves her, or because they are friends, it is clear that he isn’t for humans dying. Which, considering the demons he just killed in the last episode, I guess he doesn’t realize when he killed those demons he took the humans out in the process – maybe he’ll learn that later. Anyway, the point is, Ryo is hellbent on killing Miki just to cover his tracks and he ends up facing off with Akira over Miki’s fate.

So Where To Next Boss? With Koji dead, thus freeing up Miki, and Akira remembering how heartless Ryo can be, you have to wonder where will this show go next? Silene seems to be raving to see Amon, and have sex with him. She even wanted to personally go to Koji’s to confront, retrieve, or just plain see him. So will she and Kiam take a more active role?

Personally? I hope so since the violence is becoming something you can get used to and while the sexual content still has a shock factor, within one or two episodes I foresee that dissipating too. And while invested in the characters, especially what Miko will and won’t do, since there is quite a bit of darkness there, I’m wondering where this train plans to take us and what’s the final destination? Much less, as noted in the “Question(s) Left Unanswered” section, how much control do these demons have over the world?