As we see Akira have a brand new body, that takes getting used to for everybody, we are introduced to the upper echelon of demons.

Previous Recap: Episode 1 “I Need You”

With Akira’s new body, is has become the guy to swoon over. He is tall, fast, that bulge, oh the girls just can’t handle it. As for how Akira reacts? Well, it isn’t necessarily going to his head but he does enjoy the free food and the attention. However, he hasn’t changed that drastically. Unlike most anime characters who suddenly have superhuman, or in this case demonic, powers, he has mostly remained the same.

But, it isn’t just him worth noting, when it comes to being objectified in a way. We learn that Mr. Nagasaki, this journalist/ photographer, is also into young bodies. The only difference is, he is an adult and seemingly enjoys not just taking pictures, like he does of Miki in her bikini, but wants nudes and sex. Something he gets out of Miko in such a way it is hard to confirm whether she was raped or not. However, as seen increasingly, girls in this show aren’t just waiting around, hoping for some guy. Between the girls playfully humping each other, fantasizing about Akira’s bulge, and more, this show seemingly is just getting started with its kind of creepy (since we know they are under 18), sexual content.

So This Is What Has Happened to Me (Some Background on Demons): Ryo, Akira, Silene, Kaim Starting with Akira and Ryo, the two chat and it seems what Akira has become is someone with the heart of a human but body of a demon. Meaning, physically he is a demon and can go between his true demonic form and his human form. However, mentally and emotionally, he is still a human being. Now, whether doing things violent or sexual could taint his heart enough to become a full-fledged demon? Well, we aren’t made sure about that. What we do know though is that Akira seemingly lost his parents or is simply not being raised by them.

To make a long story short, they left him maybe around the time Akira met Ryo, and he has since lived with Miki’s family, who were friends of his parents.

Leading to some background on demons. From what it seems, the majority of demons we saw a Sabbath, those were low-level demons. The upper echelon, perhaps royal demons, are those like Silene and Kaim. However, the king or god of demons, that’s Amon. Who, based off what one low-level demon said, could be the demon which has possessed Akira. 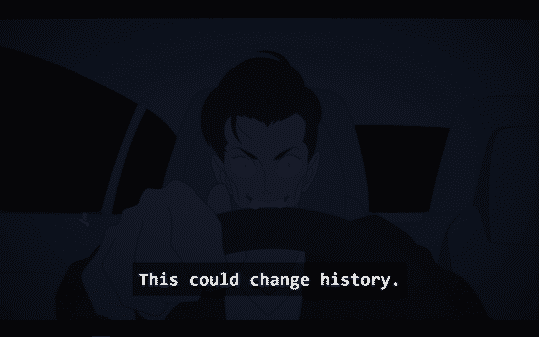 It isn’t clear what is the ultimate goal of Mr. Nagasaki – assuming I’m not confusing the possible perv with a completely different character. However, it seems to become legit, and not just some perv who takes pictures and sleeps with minors, he wants to expose this demon problem. The issue is, with demons, in this universe, having precision sight in the dark, him with his night seeing goggles and a camera which has a blaring red light, it gets him caught. Luckily for him, Akira and Ryo, who are demon hunters now, save him.

But, I should note, it isn’t on purpose. In fact, with Ryo taking note of Mr. Nagasaki seeing them, and getting away, he has now become a problem. The kid which, considering how crazy Ryo is, who knows what he may do. If not inspire or ask Akira to handle. Maybe pushing him closer and closer to fully embracing his demon form. There is something appealing about how much Akira has changed with these new powers, but he kind of hasn’t at the same time. Let me explain, in most shows featuring a nobody who suddenly is noteworthy, they do a 180 personality wise. In Devilman Crybaby, however, it is more so about the physical change than the personality. Is Akira still this mousy guy? Not really. However, it isn’t like he has fully been taken over by this demon either. We see a gradual change and him, with this new body and powers, it is like he is slowly treading when it comes to using his abilities.

Take him taking Miki’s phone and addressing her situation with Mr. Nagasaki. With her either being like a sister, best friend, maybe even love interest, he has probably wanted to say something to protect her for a long time. However, with no real ability to do so, he just looked on and kept his mouth shut. Yet now, with him having the powers required, you can see him not only willing to piss off Mr. Nagasaki but maybe really challenge Miki’s naivety.

24 Hour Change And You Say Doping?

I find it amazingly weird that Akira’s transformation isn’t more alarming to anyone, especially Miki’s family. This scrawny kid, who looked like he was in middle school, now looks like a full-grown college student who belongs on a basketball team. Yet, the explanation is doping or just treating things like you’re used to him looking like this – in the case of Miki’s family? That raised an eyebrow for me.

Women and Girls Have Special Feelings Too It’s kind of weird, in a way, that while live-action productions are just now really embracing feminist ideals, animation, arguably, has been so far ahead. Now, I realize with this show mostly focusing on what tantalizes men, or those into women, that is a hard thing to claim. However, taking note of Mika and the unnamed girls, the idea that she was, for a scene, focusing on her pleasure and we saw other girls who expressed their sexuality amongst each other, was different. Something which is a bit uncomfortable, due to their assumed ages, yet at the same time presents this sort of natural vibe.

Natural in the sense that, you would assume girls and women have desires and express it amongst each other and themselves. Heck, even Silene notes her urges. All of which, again, can push the idea, like the majority of the sex scenes, it might not be about their sexual agency but to tantalize an audience, but I guess it depends on how you want to take it. What is his backstory? Seemingly a kid who has some kind of mental issues, is now a professor, and apparently rich. I have so many questions and it seems the show isn’t ready to give answers just yet.