Bex looks for a wedding dress and when it comes to the secret society, let’s just say it brings up an issue from the past.

Being that Andi has pushed her parents to get back together, as well as married, since she has seen them in a room together, she is as invested in the wedding as them and Cece. However, with Bowie deciding to use his dad’s tux, she can’t participate in him picking the perfect outfit for he inherited it. As for Bex? She originally was going to go with Cece’s, to match Bowie using his dad’s, but her and Cece have different body types. So, instead, she and Cece go shopping – without Andi.

As you can imagine, after finding what seemed like the perfect dress, both experience a massive amount of guilt and try to trick Andi into thinking she was part of the process. However, Cece is unable to hold up the lie, so the truth is revealed. This is devastating to Andi for while she knows she’ll have a part in the wedding, she thought she’d be included in more than just the ceremony.

Leading to, because of massive guilt, Cece and Bex returning the dress they found but falling in love with one Andi finds as they walk down the street. 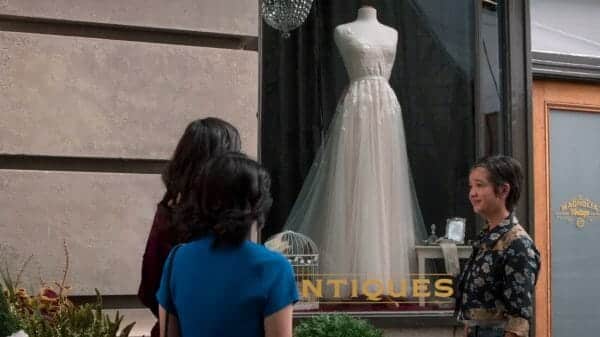 One of the things which have been an issue, but not necessarily made into a big deal, is boundaries and roles. Being that Bex has operated as Andi’s sister for most of her life, it makes it so she’ll forever have to deal with the guilt of lying to her daughter. Thus creating the awkwardness of trying to transition from Andi being her little sister, almost her friend, to being her daughter.

In the last episode, we saw it click for Andi that Bowie wasn’t just her dad in title, but could be in action, and it seemed she got a reality check this episode too. For while it would have been considerate for Bex and Cece to think of Andi, considering all she has been part of, let’s not forget that Andi is a child. Cece has been married, did the dress shopping experience, and the wedding is partly about those two mending their issues. And while it isn’t like Andi is 7, there are certain things Bex and Cece need to do alone, together, as mother and daughter.

After all, for most of the series, they have either been fighting or had a truce. We haven’t really seen Bex and Cece grow closer and they needed that moment, without Andi because, otherwise, they would be trying to set an example, you know? Take Andi talking about feeling betrayed and not liking the dress Bex and Cece liked. With her disappointment, her not liking the dress, it made it so they both got into parental mode and had to worry about Andi’s feelings and her thoughts and opinion – despite her neither wearing the dress nor paying for it. That is, as opposed to Cece giving a straight up compliment, without something underhanded alongside it, to Bex and them just having a moment.

Since, in the long run, that is what Cece is trying to get here. It’s not just about showing up her sister but, considering Cece’s mom probably wasn’t at her wedding to Ham, though I could be wrong, she wants to give Bex what she didn’t have. And yeah, maybe she wants to be selfish about it and didn’t think of Andi since she wanted the moment for herself but, think about it, Bex came to her about looking for dresses. Bex, of all people, came to Cece for advice, and money if we’re honest, and took Cece’s advice with hardly any lip. Taking note of their history, do you think Andi was a thought at all and Cece wanted to not cherish having a one on one moment that she has likely waited for since Bex transitioned from needing her to hopefully wanting her?

Do you remember season 2? Back before Marty just disappeared and was never to be seen again? Before the end of Marty and Buffy came Marty asking Buffy out and her rejecting him. Why? Because she didn’t want things to change and that issue pops up with Walker. In the pursuit of trying to make his proposal for her to go to the formal with him epic, he has Cyrus, Jonah, even Andi, help him create a secret society to build up anticipation. But, Buffy says no. Leading you to wonder if she still fears change or if it might be something else?

A couple of episodes ago we mentioned how Andi is still likely dealing with the shock of her sister being her mom and how that affected most, if not all, of her relationships. I think now we need to address that Buddy’s mom being in the military, how that may have affected her potential relationships. Mostly in the idea of not wanting to grow close to people in a way which could hurt her.

Now, when it comes to Andi and Cyrus, she’s known them forever so while they have the potential to hurt her, it isn’t the same way a boyfriend can. A type of relationship which perhaps scares Buffy for she has seen what worrying has done when it comes to her relationship to her mom. Also, one could argue, when it comes to the relationship her mom and dad have, between the loneliness, the arguments they may have, and the worrying in between, she recognizes how stepping from close friends to dating could be taxing. Never mind seeing what Andi went through with Jonah.

So, as much as Walker seems like a nice guy, and we see how comfortable Buffy got with Marty, it seems she still may not be ready. Leaving us to wonder, how will Walker react? Marty couldn’t qualm Buffy’s fears, and found someone else, so will Walker do the same?