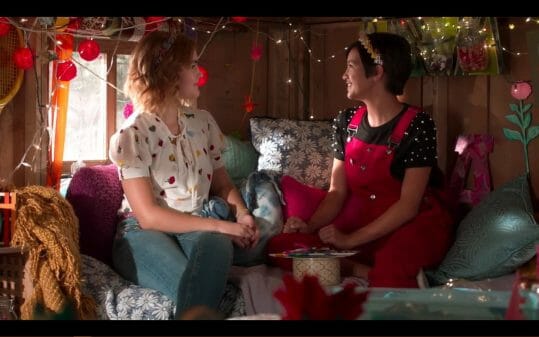 As Buffy tries to save her basketball team, Cyrus longs to speak to TJ and Andi? Well, she finds herself in the middle of Jonah’s new relationship.

The Men Need Something To Do: Ham, Celia, Bowie, Bex

Since Ham has been back, it seems he has been restless. Something which is worrying Celia not in a loving wife way, but because he is making weird sculptures now. Bowie too seems restless but it could also be that he wants to feel useful. After all, Bowie is filling the roll Ham once had in Bex’s life and with him crafty, not so much handy, it may make him feel inadequate.

That’s just a theory though for, in the end, the problems Bex was dealing with, be it a leaky sink, broken chair, the need for a new outlet, it seems Ham takes care of that. All the while, Bowie makes it seem this was his plan all along. But who knows for sure?

Ham is such an odd character. While Celia and Bex are part of the main cast, he is still a guest star and I wonder why. Granted, he doesn’t have any beef with Bex so what storyline is there but they could give him something right? You know, beyond divorce.

As for Bowie, he too could use something going on in his life. With the guitar lesson thing, and open mic night, it seemed he was going to have some kind of life outside Bex and Andi yet who knows if that might continue. Also, considering he was acting as a surrogate dad for Jonah, you have to wonder if that will continue now that Jonah and Andi aren’t together. Heck, considering how much he, Bowie, and Bex were invested in those two, I’m surprised he isn’t checking to see what happened.

There Maybe No I In Team But There Is A Me: Kira, Buffy

It seems Dr. Metcalf refuses to invest into Buffy’s team until they prove themselves. Meaning, until they seem like they are worth getting a real coach, a girl who is barely a teenager is expected to do the work. Makes no sense right? Well, that’s why Buffy recruits Kira, a recent transfer, onto the team. Problem is, Kira isn’t a team player and for a team which needs mentorship more than anything, having someone like Kira isn’t going to make them better.

Though, let’s not downplay Buffy calling them a hot mess. Something which Kira repeats and shows that not only is she not a team player, she cannot be someone who keeps Buffy’s thoughts between them. This combination leads Buffy to kicking Kira off the team.

Something seems illegal about the idea of Dr. Metcalf forcing Buffy to coach a team, something she isn’t qualified to do, before he’ll hire a coach. I’m not saying it is a Title IX issue, but I think someone could make that claim. For considering the obstacle and pressure he is putting a, let’s say, 14 year old just so she can have a girls basketball team is a bit much. Especially considering a lot of the issues she had, because of TJ, on the boys’ basketball team.

Because of the gun situation, Buffy and Andi forbid Cyrus from seeing TJ. Yet, because of their connection, TJ makes a way to see Cyrus when Buffy and Andi aren’t around. Thus giving him a chance to apologize and reveal he didn’t know about the gun. On top of that, reveal he was the one who told on Reed. Which may or may not be enough for Buffy and Andi. Lest we forget, he just got back on Buffy’s good graces and he is the reason she is off the basketball team and felt the need to make her own.

As for Andi’s possible feelings? Honestly, Jonah’s new girlfriend, Libby, is more on her mind. First, because she thought the girl was dissing her, but really she is deaf. However, with Andi knowing some sign language, the two connect. In fact, they connect a little too well for she gives Libby reasons to break up with Jonah. Which she conveys she plans to do with Andi and the guilt hits immediately.

Now, what is it she tells Libby that inspires the breakup? Well, that Jonah is cute but not a good communicator. Libby fills in the lines from there and pretty much labels Jonah as boring so now she seemingly is done.

Man, the way that TJ and Cyrus scene was shot at the swing set, I swear to you I thought they were gonna kiss. Which, at this point, who knows if that may happen. Cyrus seriously has a crush and TJ says borderline flirtatious things, but let’s put into play as terrible as he was to Buffy, TJ isn’t an overall bad guy. He did tell on his friend, when he didn’t need to, and got said friend community service and his friend’s dad police attention, but he isn’t a bad guy… for the most part.

Also, there is this vibe that, like with Jonah, TJ appreciates that Cyrus doesn’t require you to be anyone but yourself. TJ doesn’t have to be machismo, “One of the guys,” hide his emotions or anything like that. Cyrus allows you to be open and vulnerable. Basically, he is a mobile safe space.

Leading us to Andi’s situation. First, I really hope Libby isn’t a one episode character. I’m all for representation but it is annoying as hell when characters like Libby show up one episode, connect with a character, and disappear. Almost like they never existed. Second, I find it hilarious that Jonah got called cute but boring. For when you really think about it, he kind of is.

Not that I’m discounting him being a singer, playing guitar, and ultimate Frisbee, but the big issue is that if you’re not into what he is, then he is just there. Take Libby. Rather than attempt to learn sign language, so they can communicate better, he just does texting. He has this whole person, who he has some kind of interest in, but rather than learn a new language, which she can walk him through, show there is a mutual investment, he takes the way which is most convenient for him.

And what is important about this call out is that it gives the show consistency. It pushes that young girls shouldn’t just be with a guy because he is cute and maintains the idea, you shouldn’t change your whole life to be interesting to him. There has to be mutual interest or at least some mutual investment into what both people are into. Otherwise, that person is selfish and you need to leave them alone.