For long-time fans, the penultimate episode of Andi Mack will deliver two things we’ve been waiting on a long time. One of which includes meeting Jonah’s parents.

In case you were wondering why Jonah’s mom and dad have yet to be seen, well it is because of a slight sense of embarrassment. Why? Well, Jonah’s mom, Judy, went viral for an exercise video she did. One which local kids know of and for a long time, Jonah was embarrassed by. However, at this point in his life, he doesn’t care anymore. So when Cyrus and Buffy help him move, he admits who his mom is, introduces them, even does the dance that has haunted him since he was around 6 years old. So, you know how Bex didn’t like how much pressure the wedding was or Celia using it to show up her sister? Much less, if not more, her feeling bad that Bowie set aside his dreams and wants to make her happy? Well, alongside Buffy, Cyrus, and Jonah, she planned her and Bowie’s wedding in the mountains. Something beautiful, but still low-key, and even has Celia there, thanks to some manipulation. Leading to what surely will get your eyes watering.

Andi, Your Future Is Calling: Andi

During the wedding, Andi’s phone rings – awkward – especially since she has been the biggest advocate of this wedding. However, with seeing a voice mail from the arts high school, and her listening to it, so comes the belief a major change is on the way. For, despite finally seeing her parents wed, Andi is left awestruck, perhaps better said dumbstruck.

Setting aside how weird it is that Bex relied on her daughter’s friends to pull off a wedding – I must admit I cried. Yet, how could you not? The marriage of Bex and Bowie has been a long time coming with a lot of will they or won’t they? Never mind there was a time Bowie was dating someone else, and because of her past relationship, after Andi’s birth, it seemed Bex was very hesitant about love. Almost like she got married in secret but had it annulled or also secretly divorced. Who knows?

Either way, between the moment and Jonah’s son, TEARS! 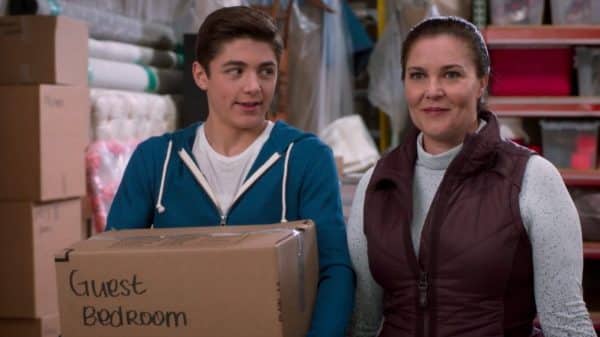 Well, more so his mom in the flesh and we see his dad, who looks like the guy from Queer Eye For The Straight Guy, in the fitness video. Now, was it as big as when we met Buffy’s mom? No. But that meeting was built up to. This was pleasantly random and honestly, so overdue that building up to it would have been an admittance that Jonah’s background has been far too neglected.

With that said, I must admit I’m tempted to put this on the fence since, while we could look toward everyone else’s parents to understand why they are who they are, we won’t be able to with Jonah. Especially in terms of his issues with committing to someone and being a good boyfriend. But, can’t have it all right?

It Is All Ending, Isn’t It?

It’s weird how, and maybe you feel this way too, I can’t think of a huge amount of shows I’ve watched from beginning to end. Especially shows I didn’t drop halfway and caught up on because I learned it was going to end. Nevermind shows that weren’t abruptly cancelled but seemingly have a planned conclusion. It’s a weird feeling, right? To see storylines wrap up, being given a sense their lives will go on without you learning the highs and lows of their next chapters. All you can do is imagine, maybe read a fan-fic, or set a Google alert for a reunion.

But with that said, you have to wonder how will it end? Andi has long relied on her friends for strength, comfort, and perhaps validation in some ways. Particularly since her family dynamic shifted and she started dating. So has she gained the strength needed to be on her own in a new environment? What about Buffy? After long being the friend knowing she isn’t necessarily ready to date the way some of her peers were, are her and Marty about to take that leap?

Heck, Cyrus… adorable Cyrus – will he finally get to kiss a boy? Not to downplay him coming out but, it kind of stinks that everyone else has possibilities, or had them, and Cyrus has just had to live vicariously. Which, possibly, is what a lot of young gay men had to do before finding their first real, mutual, crush. Yet, wouldn’t it be nice for Andi Mack to go out with a bang and even if it is just TJ holding Cyrus’ hand, maybe not even kissing, Cyrus getting to have a moment with someone of the same sex?