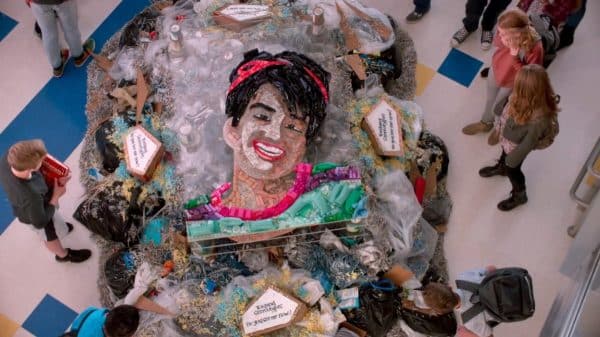 As Jonah shows he still isn’t ready for a relationship, Bowie expresses his feelings, and Andi faces being stereotyped for being Asian.

I Know I Wanna Marry You: Bowie, Bex

Being that Bowie is the type who just wants Bex to be happy, naturally, he suppressing a lot of his feelings. Making you realize he and Bex have a similar relationship to Ham and Celia, to a certain point. But, one thing making Bowie stomach his desire to get married hard is that he is essentially living a married life and Bex. For with her still wearing their engagement rings, and trying to downgrade to just a nice ring to wear, it hurts. Then there is the snow globe and the indecision of where to put a symbol of the proposal. However, it is seeing Bex’s wedding dress that does it for him. With that, he can’t help but say not having a wedding hurts a bit, but he is dealing with it because he wants to make Bex happy.

Leading her to realize Bowie may have long been putting her happiness first and she hasn’t really been considering his.

As Jonah established long ago, he does not like relationships. If anything, he often feels pressured into them for either the other person catches feelings, or he feels the only way to keep them in his life is to be in a relationship. We saw it with Andi and now are seeing that again with Amber – someone who now loves him.

The problem is with Amber loving Jonah, however, is that he doesn’t love her back. Don’t get us wrong, he likes her as a person but with him still uncomfortable with the idea of having a girlfriend makes the idea of romantic love something he wants to shy away from. Yet, as he tells Andi, or rather implies, he’d rather pretend he didn’t hear it or dodge the statement more than anything else. But, if Amber pushes it, he is not above breaking up with her – again.

This Is Me: Andi

With Andi not leaving the school district and growing up in the same area all her life, it makes a class assignment of describing a pupil uncomfortable. She knows details about other people’s hobbies and makes it clear that, even if they aren’t friends, she sees them. However, when it comes time to describe her, all they know her for is a party which happened back in season 1, and the rest are assumptions.

Which, for Andi, is a two-fold problem. First, the fact she went to school with these people since Kindergarten and yet a party when she is 13 is all they remember. Not the protests, her short stint doing ultimate frisbee, her style, none of that. When one student describes her, all Andi hears are what she perceives to be Asian stereotypes. Thus leading Andi to create an art installation, in the middle of the school, named: “Trashing Stereotypes, Do You See Me Now?”

While I do feel they could have greatly expanded the stereotype plot, considering the show has touched upon Andi’s culture many times, I get why this might be a one and done plot. After all, of the Disney shows I’ve watched, most of them don’t make the character’s ethnic background a big thing. They do have moments like, in Andi Mack’s case, Chinese New Year and Celia talking about immigrating, but it isn’t an episode to episode thing. Yet, that doesn’t mean bringing up how untrue Asian stereotypes can be, or better said are, isn’t a valuable thing to put into the ethos.

Why? Well, because what Andi’s peer said now could be seen as innocent and can currently be corrected. However, in 5 to 10+ years, that will be her mindset and lead to micro-aggressive moments which could potentially insult someone else and haunt her. For if Andi feels insulted as a young teen because it is assumed she is good with computers, or plays violin and piano, what her peer currently perceives, imagine how that can evolve. Especially if her peer becomes emboldened to say something which wouldn’t just rub Andi the wrong way but could be considered a racist statement. 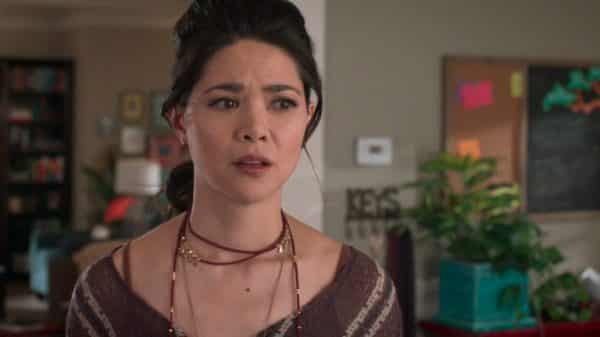 Between Bex and Jonah, we have two wonderful examples of people who aren’t inherently selfish, but do operate on a learning curve. One which makes it so neither are ideal partners for anything long term. Why? Both are more so invested in the fun of consistently having someone to talk to and hang out with over the expectations of commitment and feelings which come with that.

For Bex, while she loves Bowie, and clearly has had sex with him, more than likely she isn’t of the mind to fit what it means to be a wife. Perhaps similar to what Jada Pinkett-Smith says about her relationship with her husband, the mold that other people have just doesn’t seem appealing to her. I mean, part of the reason the wedding fell apart is because Celia wanted something grand to stick in her sister’s face and Bex wanted to make her happy. Also, Andi wanted something big as well and with Bowie always such a neutral party, or someone who just wants the other person happy, he was of no help. Thus, Bex went through the motions despite really, if I recall right, just wanting to do a justice of the peace ceremony.

Then with Jonah, based off how Andi and Amber got with him, I think he strictly operates under the impression that if you get along with a girl well enough, it’s only natural to date them. Pushing the question of why he thinks that since, without meeting his parents, it’s unknown what his influences are. So we can only assume he operates based off what he watches around him. Which, as shown in many a movie, show, and sometimes real life, it means all the fun comes from the honeymoon stage, especially for the guy, when things are in a gray area. Hence Jonah likely not liking the whole “Girlfriend” word since that is usually when things get serious, fights happen, and drama.

Yet, maybe all Jonah needs to do is have a real mature, Marty and Buffy, kind of conversation about where he is at emotionally, what he wants, and where he is, in terms of his maturity. After all, Amber is older than everyone. Maybe only by a year or two, but she is in high school and exposed to things which having penetrated Jonah’s bubble yet. So they are at two different stages of life. So it seems they are long overdue to find some middle ground vs. Jonah attempting to come to her level despite being wildly uncomfortable.