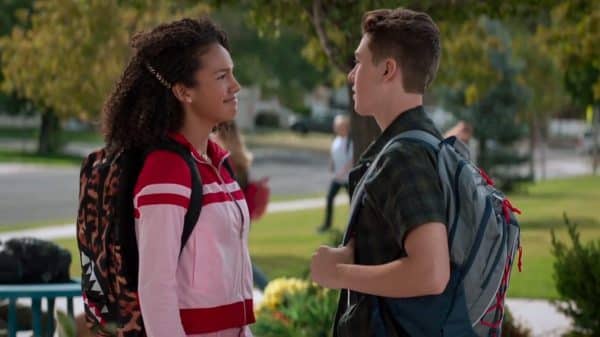 With Buffy kicking her off the basketball team, Kira has been on her own it seems. Thus leading her to check out the boys’ team for sports is likely the only way she knows how to make friends. However, no sooner than she begins chatting up TJ, talking about joining the team maybe, Buffy’s best friend walks up. Making it seem, perhaps in Kira’s mind, Cyrus was trying to keep her isolated on Buffy’s behalf.

Amber and Jonah are dating again, since Libby broke up with Jonah, and Jonah feels reminded of one of the many reasons he and Amber broke up. First and foremost, it is a lot of work. Between constant communication, liking her posts, and not just having fun, he already seems tapped out. So, when Andi is forced into the middle by both parties, she advises Jonah to do what he wants rather than stick to what he thinks he should do – which becomes a problem for Andi later on. 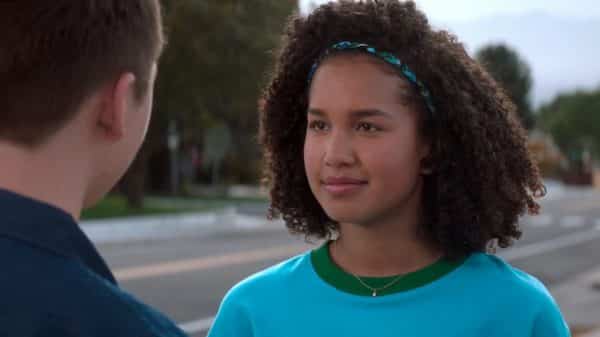 But, enough about all that BUFFY AND MARTY SHARE MULTIPLE SCENES TOGETHER! All of which makes it seem that they easily pick up where they left off. However, before we get too excited, we’re reminded Marty has a girlfriend. Yet, despite his disclaimer, the two seem closer than ever.

Oh, where to begin? Well, Bex and Bowie decide not to get married, and it is clear Bowie and Andi aren’t happy about this. Sadly for her, that is just the first of a series of sad moments. The second comes in the form of Cyrus, originally, not doing her Mount Rushmore costume for costume day and that gets followed by Jonah deciding to drop out of the group costume. Why? Well, because he took Andi’s advice to heart and admitted to himself, and her, that he isn’t a costume guy.

As you can imagine, this slightly short circuits Andi but then Cyrus shows up to complete the costume. Mind you, it isn’t 100% because he wanted to but more so because Kira wiggled her way between TJ and Cyrus. It isn’t apparent how, but she definitely seems ready and willing to get between the boys and maybe even date TJ.

Marty and Buffy Together Again

While Marty having a girlfriend complicates things, the chemistry is still there, and these two remain an OTP. Leading you to wonder how Marty’s girlfriend is going to react when Buffy meets her, and they try to interact in each other’s presence?

So, When Are We Going To Address Andi’s Mental Health? Though anger is a natural and healthy emotion, something seems to be swirling beneath the surface with Andi. As previously noted, between how life changed when she learned her sister was her mom, and the rest of that spiel, to trying to date, and now this marriage thing, Andi seems off. Not in a major way, but an eyebrow should be raised. For it seems as she loses control and her life doesn’t adhere to some form of consistency, it is slowly changing her for the worse. But it is hard to say what path might be chosen as she struggles with change, disappointment, and perhaps feeling that she can’t really rely on anyone.

Jonah Putting His Foot Down

With Jonah getting back with Amber comes the reminder that Jonah has an issue with saying no. This feels important for, in my mind, it seems like an issue usually associated with female characters more so than males. Especially considering Jonah is supposed to be this fun loving guy, so him not just going along to make people happy sets a nice precedent. Not only in terms of showing his growth from doing what Amber, even Andi wants, while being openly, though often secretly, miserable, but also him taking control of his life.

For, when it comes to Jonah, he often has been like a dog at a house gathering just running around trying to keep everyone happy. Something which, with his anxiety, I think he realizes he can’t maintain anymore. But his ability to now say no could also stem from him finally being comfortable in his relationships. I assume that since, and maybe my memory is off here, I think Jonah noted something about not liking to be alone or hated in either the tail end of the first season or in the second. So him being willing and able to say no means he might finally becoming comfortable in his relationship with Andi, as well as who he is as a person.

While Disney should continue to be applauded for having a gay character in Cyrus, I must admit there are some mixed feelings about the fact you know he isn’t likely to date anyone. For one, he is in the middle of a small town, and so likely the gay or bi population is tiny. On top of that, while not defined by being queer, there remains the issue of it not consuming the character. Also, while Disney has been being a bit more progressive than it was formerly, they don’t want to alienate families too much.

Thus making this Kira situation a bit complicated. Granted, it wouldn’t make sense with everyone pairing up for TJ to remain single – he is head of the boy’s basketball team after all. However, I don’t know if I can stomach Cyrus going from one unrequited crush to another for most of the show. For while many gay kids probably can relate to how Cyrus feels, I must admit I want to see this kid have some hope and it not be for naught.

Marty and Buffy Together Again - 95%

So, When Are We Going To Address Andi’s Mental Health? - 85%