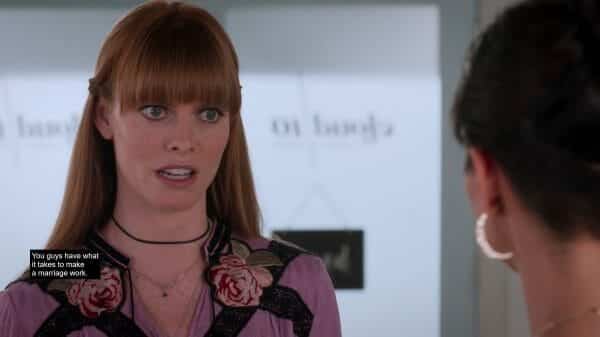 Miranda: You guys have what it takes to make a marriage work.

Miranda makes an appearance and causes havoc in Bex’s brain as Jonah reveals one of the sources to his anxiety and one of his new favorite coping mechanisms.

The Curse Of The Ex: Miranda, Morgan, Bex, Bowie, CeCe

Being that Miranda misses Bowie, and her new boyfriend must suck as a father figure, Morgan convinces her mom to visit Bowie at his job. This leads to him revealing he is engaged, trying to convince Morgan he doesn’t hate her, and him being guilt into a guitar lesson. One which doesn’t end well since Morgan decides to play hide and seek and we learn Miranda is in on it. Something that upsets Bowie to the point of having his serious voice and realizing, as much as Miranda may own her part of Morgan’s previous incident, she still has a lot of growing up to do. 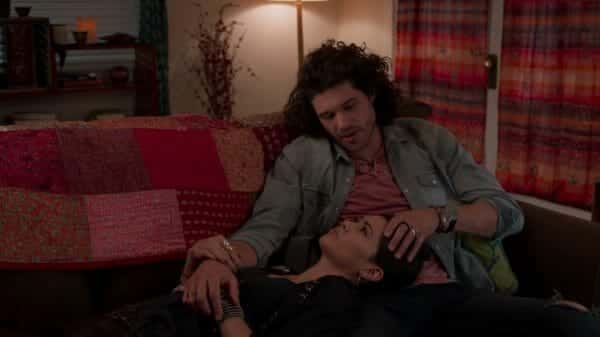 But the real kicker here is Miranda decides to do a scorched Earth approach and poisons Bex and Bowie’s pending nuptials. How? Well, just by noting how her marriage failed. Leading to Bex wondering if she and Bowie’s might for with them in such a good place, she doesn’t want to, years down the line, it turn to hell.

Jonah’s anxiety has mostly been linked to either his relationship with Andi or things going wrong as the triggers. It has happened randomly as well, but what started it all has been an underlying question. The answer? Jonah’s parents have declared bankruptcy, and they’ve been living with relatives ever since. Something Andi knew, because of his wish not going up with the rest of the lanterns, and Amber knew since she and Jonah are still friends.

However, at first, Buffy thought they were back together. Why? Well, Amber was giving him a lot of free things. Leading you to wonder, after her parents’ marriage collapsed, are things better for her now? We haven’t gotten an update in quite some time.

Never bet against Buffy. Despite it appearing Jonah and Amber were getting close because she understood money woes, the truth is that they might be back together. At the very least, they are kissing so that means Jonah might be cheating on Libby. That is, assuming they didn’t break up already.

A Little More About Jonah In many ways, Jonah is a mini-Bowie. We don’t know a huge amount about him, for he rarely talks about himself. Mostly, Jonah operates as lightening up a situation, there to have some fun, and prefers to be part of a group than the star attraction. Making it so, when troubled, as we’ve seen, he either hides what is going on or confides in a select few. But, it makes moments like what we see in this episode, when he opens up, all the more important since it not only shows growth but trust.

Case in point, Jonah didn’t flip out at Andi when it became clear she was talking about his situation. Instead, he explained things so that there wasn’t a need to assume anything. Also, on the flip side, from Cyrus to Andi, there wasn’t any anger or disappointment of not being told. There was a sense of understanding and the kind of maturity we barely see in shows for characters twice their age.

The Return of Miranda & Morgan

So Morgan and Miranda can comeback but Marty, at this point, is probably going to be held into the dance? Which might end up being the season finale? Really? Also, didn’t Bex have enough issues with the concept of marriage? Why have Miranda, in the pettiest fashion, throw a monkey wrench into Bex’s thought process? 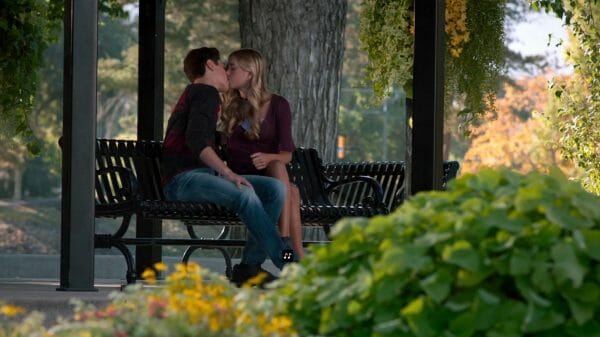 I’m not 100% sure how time passes on this show, since they aren’t often in school, and we aren’t given much context. However, considering Jonah just started to learn sign language for Libby and is now kissing Amber, nee – making out, this is troubling. Yet, relationships are messy, and Amber is helping Jonah during a tough time. So now the question is, is Amber taking advantage of Jonah, taking note of how their relationship was before, or did he initiate things?