Thanks to Walker and the Spikes’ first basketball game, Buffy has a breakthrough that leads to a familiar face returning.

You Have To At Least Try: Amber, Cyrus, Libby, Jonah, Andi

Jonah trying to rely on texting, when it comes to Libby, remains an issue and she is starting to get tired of it. Especially since Andi can sign, Cyrus is learning to sign, and Jonah is trying to rely on both to translate. Leading to the question of why won’t he just put in an effort to learn and you know what his excuse is? He is afraid of saying the wrong thing. You know, as if he and Libby aren’t already dating and she wouldn’t understand there is a learning curve.

Luckily, he gets over himself and asks her to teach him, which she does. Leading to the first sign he learns is about how she likes him – especially now that he is trying.

While Bex and Bowie have been together since they were teenagers, there are still many questions left unanswered when it comes to some things. First off, will they always live in Sunnyside? Second, does Bowie want more kids, and these are just the tip of the iceberg. But, we’re not told the answers to these two questions, and the rest of the questions aren’t revealed either – like the wish from the beginning of the season which Andi read, that is still on hold.

However, it should be noted this all started with Bowie assuming that when he and Bex got married, both Andi and Bex would change their last name. An idea Andi was iffy about, and Bex wasn’t into. So, to fix this issue, Bowie says he’ll change his name. 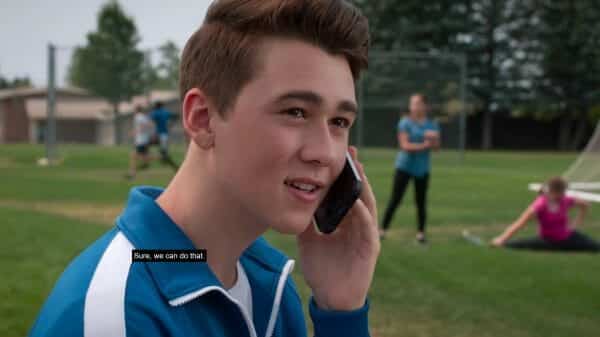 After the stunt Walker pulled, combined with making a pair of shoes for Buffy, like he did Andi, Buffy is ghosting him. However, between Cyrus and Jonah saying how much that is wrong, and her negativity affecting the relationship Buffy has with her teammates, she decides to make a change. With the Spikes, she is kinder, more encouraging, and then when it comes to Walker? Well, he might be a thing of the past.

Why? Well, after us not seeing this boy since sometime in season 2, Marty appears on screen! Now, whether this chat may lead her to ask him to the dance, and whether or not he is still dating someone, that isn’t clear. However, it seems Buffy wants to have a real heart to heart, maybe similar to what Bex and Bowie had, rather than continue this silence between them.

The Return of Marty From The Party

Marty and Buffy are Andi Mack’s end game couple. They are the cutest, most functional, and I’d argue, minus the teenage pregnancy, are kind of a peek into how things might have been with Bex and Bowie. At least in terms of compatibility. So his return, even if it means losing Walker, is worth your eyes getting big and squealing over. Though there is always the possibility, rightfully so, of Walker coming in and being hurt. After all, it isn’t clear if Buffy may ever break things off clean with him as she reignites what she has with Marty. One of the things made quite clear, at this point, is Andi Mack is a matriarchal show. The women hold most of the power, and there isn’t any real patriarchal power. Well, the principal tries to wield his, even to the point of oppressing Andi’s self-expression, back in the day. However, we saw how that worked out, didn’t we? But, the point is, you have to appreciate Bowie listening and understanding that Bex was really attached to her name so, to compromise, he changed his so they could all have the same name.

I must say though, considering his connection to his parents, I’m surprised a hyphenate wasn’t discussed. For, taking note how he is wearing his dad’s tux, you’d think Bowie wouldn’t give up his father’s name so easily. Never mind, while I’m sure he has family beyond his mom, having her possibly be the last Quinn.

Bex and Bowie Asking Serious Questions Of One Another

As seen with the Marty x Buffy saga, as well as Andi and Jonah, one of the best things about this show is how it presents relationships beyond the cute gestures. One of the latest examples is, before marriage, Bex and Bowie hashing out what conflicts there could be. This isn’t a brand new technique, but the realization there could be conflict and approaching it before it becomes a present problem is a sign of how serious they take their relationship. Also, you have to appreciate how they present simple questions to get the conversation going.

And I know, this is a show for tweens on a station which probably aims for maybe 13 and below. But let’s take into consideration how most shows, and movies, follow the same formula of meet, cutesy, blow up, and then grand gesture – then repeat. So breaking that with a more realistic approach, which doesn’t have over the top drama, and has a hidden lesson in there, it creates some form of realistic expectations.

Take Jonah who, like with Andi, sometimes is a clear example of what a bad boyfriend will look like as a teenager. He prefers what is convenient for him, sometimes doesn’t listen to your needs, and has to damn near be threatened with being broken up with to get it. Now, he does turn things around eventually, but through him, we’re shown both a bad boyfriend and how someone can evolve. It all depends on who he has around him, if he is willing to change and, most importantly, how much does he value you?

Buffy Being More Positive With Her Team

I think it can be said that when it comes to Buffy and her relationships, she doesn’t like complication. Considering she has enough of that at home with her mom, she likes to keep her friendships simple and happy. Plus, lest we forget, being the best in sports had long been her way of making her mom proud and reminding her she does not need to worry. So while she doesn’t have a breakdown on court, it is hard not to keep that in the back of your mind.

But, growth is what Buffy experiences this episode, and with her mom stationed in the states, it seems she no longer needs sports to be her crutch. Heck, it could be a factor in her talking to Marty again. For it could be that she saw being the best, for the sake of her mother, in conflict with possibly losing to Marty. For if she allowed one, it could mean disappointing the other. Not to say that makes sense but let’s not forget that Buffy’s breakdown, last season, came from possibly losing to Jonah in a non-sporting event.

Is Amber Just A Floater? 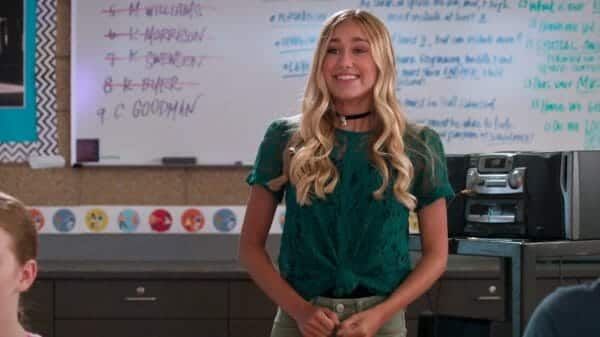 While you have to admire Amber’s growth, there is also a need to question what is the plan for her? Is she just going to float between Andi and Cyrus, as a supporting character, or will she have her own story again? We know her parents are going through it, but that is maybe one or two lines before diving into what is going on with Cyrus or Andi. Though, considering high school is around the corner, perhaps she is being held onto for she shall be the bridge which ushers The Good Hair Crew into the sacred halls of high school.