As we get to experience a full lesson from Quell, we also get to see Kristin’s dysfunctional familia.

Table of Contents show
1 Trigger Warnings: Scenes of Torture
2 No Religion At The Dinner Table: Abboud, Kristin, Alazne
3 This Is What You Were Trained For: Quell, Takeshi, Kovacs
4 Who. Is. Ryker?: Kovacs, Kristin
5 Collected Quote(s) & .Gifs
6 Highlights
6.1 A Sense of Culture
6.2 The Neo-Catholic Conversation at Kristin’s Dinner Table
6.3 Quell
7 On The Fence
7.1 So, About Police Brutality…
7.2 The Ryker Mystery
7.3 Previous Episode’s Recap

No Religion At The Dinner Table: Abboud, Kristin, Alazne

Though the issue of re-sleeving has lived on in the background, with it being Dia De Los Muertos, and Kristin bringing her abuelita back from the dead, it leads to a contentious dinner conversation. One which addresses the various feelings surrounding death in their day and age. Nothing huge, earth-shattering, or quotable, but probably the most interesting scene we have ever seen Kristin take part of.

Especially in terms of the reveal that the ability to be re-sleeved, and such, came from Elder tech. Meaning some alien technology was harnessed to do all this. Really pushing the question, why don’t we see alien creatures considering it has been established that multiple worlds exist? Why is it basically humans and AI?

But, that aside, seeing an actual conversation, which didn’t seem as stiff as many of the ones Kristin has been a part of, was a welcome change.

This Is What You Were Trained For: Quell, Takeshi, Kovacs 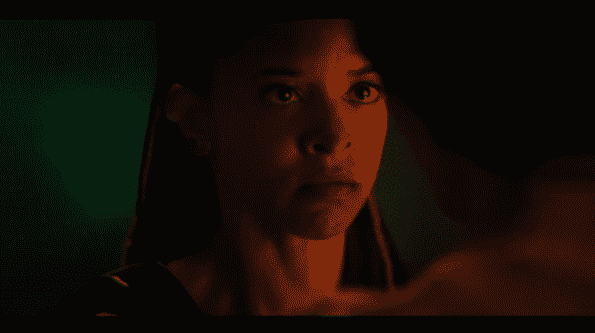 Quell plays a strong role in this episode as we watch Kovacs get brutally tortured and Takeshi go through Envoy training for such. Which, all things considered, doesn’t compare. What Dimi the Twin does to Kovacs makes what Takeshi goes through a walk in the park. Especially since Quell isn’t trying to beat him up that bad. Which, considering Takeshi’s past as an officer of the Protectorate, and him taking part in Quell’s friend Iffy dying, it is hard to not be a bit surprised by her going light on him.

But, she has feelings for him. They aren’t the kind she can easily or openly express, but I think some, like his sister Rei, peeps something is going on between the two. She may not have full details but expect a confrontation sooner or later.

As for Kovacs? While his torture scene isn’t like something out of The World of Kanako, it is kind of gruesome. Nails get pulled off, some Alien

looking thing crawls into him – but doesn’t produce any noticeable pain or discomfort. Though, in the end, Quell’s training pays off and Kovacs kills any and all people he comes across. While also taking Dimi’s head as a trophy.

Who. Is. Ryker?: Kovacs, Kristin

A question which perhaps should have been asked is: Whose body is Takeshi in? Every sleeve used to belong to someone, so who was this guy? Well, from what it seems, it was Kristin’s former partner. Now, whether strictly business or some funny business, that’s debatable. What is fact though is that this man might have been a dirty cop, or at least framed in such a way he came off as one. Hence why Kovacs keeps having Russian mobsters come after him. It, so it seems, has nothing to do with Laurens’ murder or his stalled investigation into that.

“You are not trapped, you are waiting.”

“No matter how long you live, you never finish.”

With the episode noting how big Dia De Los Muertos is in Bay City, you are reminded there is a complete world outside of what goes on with Kovacs and Kristin. That they aren’t central but simply the two lives we focus on while so much else happens around them. Plus, with it being noted that Dia De Los Muertos is a combination of the day named, Halloween, and strangely Thanksgiving, so brings about a lot of question of how that happened? Which, like the USA falling as an empire, not being explained but maybe the book answers these questions? 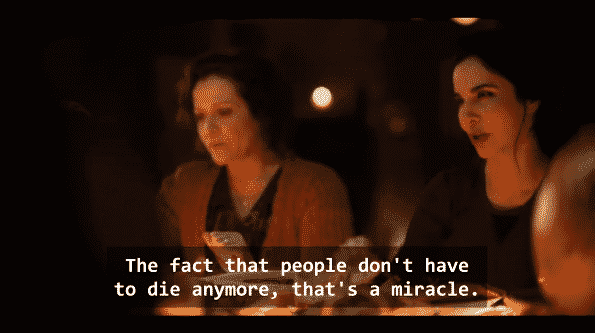 Sleeves and the moral argument for and against it have been simmering in the background, as noted. But it really comes to a head when the abuelita returns, in some thug’s body. Especially since she and Kristin are the only ones who believe in re-sleeving, while everyone else talks of the soul and eternal damnation. Though, it really gets interesting when the subject of miracles comes up and how the miracle of finding a way to extend life is negated and the devil is brought up. Which abuelita calls out as a last-ditch effort to save face in a losing argument. Something I found hilarious since it is so true.

And I highlight that conversation since it was the first one which seemed rooted in reality. For while I get we are in some future dystopia with a lot of wonders and problems, something you don’t see in a lot of sci-fi or fantasy productions is the normalcy they are built off of. The family unit, which isn’t just about loss and loneliness; having slice of life days of just going to get groceries; and pretty much anything which doesn’t push how horrible life, work, and the pursuit of the production’s ultimate goal is. 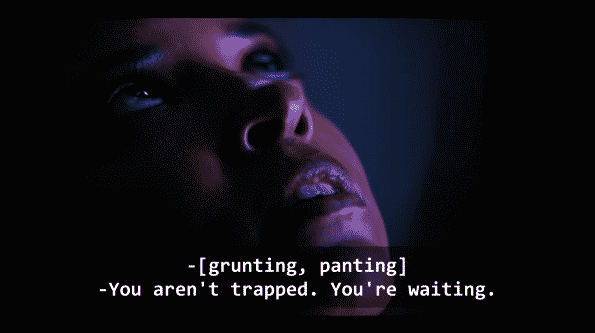 Renée Elise Goldsberry is the female hero, or anti-hero depending on how you want to look at it, that we deserve and yet sadly isn’t the star. Whether you are talking about being a bad ass, looking like one, or even the psychological mind games, she wipes the floor with everybody. And even if you want to talk about romance, once again you get this vibe that the past will probably be always more interesting than the future.

Especially in terms of Quell and Takeshi’s chemistry vs. Kovacs and Kristin. For with it being revealed Ryker, Kovac’s sleeve, meant something to Kristin, and her talking about lustful thoughts earlier, you know something is going to go down – pun intended. But, urgh, the futures just don’t have a fighting chance at all.

So, About Police Brutality…

Um, in the middle of a station you can just shock someone to the point they pass out and it means nothing? Much less, re-sleeve their body for personal use? WHAT?!

While it should have been a bigger question of whose body is Kovacs in, that opens up the door to question everyone’s body. Are they an original or re-sleeved? Something which, in the age of when that is a possibility for everyone, the last thing desired is more reason for the future people to get additional screen time. Hence why it was a thought in episode 2, at least according to my notes, but hasn’t been something really pondered about. Though, I will admit, I am very interested in how people get brand new bodies and whether they are mostly artificially made or if they are organic? Since we don’t really see a whole lot of old people walking around.

But, I digress. When it comes to this Ryker Mystery, it seems like a good side story to go off onto since the Laurens investigation isn’t going anywhere. Much less, with Kovacs not being a former PI but a soldier turned Envoy, him taking on the new Russian mob may fit him better than trying to encompass some Neo-Noir, with sci-fi flavoring.