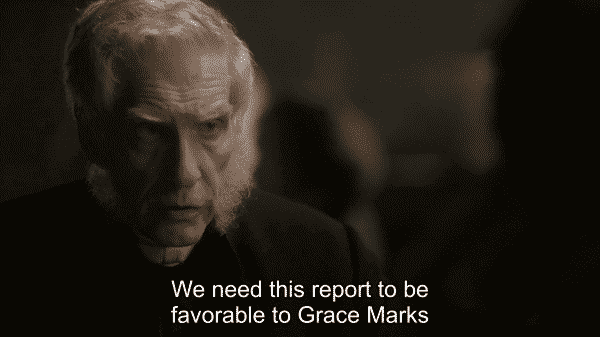 And so we come upon the day not only Nancy but Mr. Kinnear were murdered. But does Grace tell us the whole story?

There is such a wish for Grace to be pardoned that when Jeremiah, under the ruse of being a hypnotist doctor, comes around, they push Dr. Jordan to let him be part of his report. Though, as you can imagine, with how intimate Dr. Jordan has become with Grace, to the point of sex dreams, he doesn’t want some other man interfering with his work/ fantasy. Yet, with Dr. Jordan not getting results quickly, especially with him speaking as if Grace may truly be guilty and undeserving of a pardon, it seems Jeremiah may get to talk to her old friend. Someone whose face, on sight, leads her to faint and a bit bewildered when he is up close. Leading to her surely wondering, if she took up his call on the first ring, how different life could have been.

What Is Remembered About The Murder: McDermott, Grace, Nancy, Kinnear, Dr. Jordan

As noted in past episodes, and verbally said by Grace, she takes careful time in crafting what will be known and left in the dark. When it comes to the possibility of Mr. Kinnear having relations with Grace, she shuts down such conversations. Heck, as Dr. Jordan goes beyond psychology and sounds like a lawyer doing cross reference, we see Grace picking and choosing what can lead to her being excused or not. Playing up her assumed delicate condition.

Yet, Dr. Jordan seems to grow tired of the sleepless nights and dreams which are grabbing hold of him. He also grows tired of Grace’s stalling so he pushes her forward. Leading to us learning Nancy did as she was toiling over and gave Grace notice on the day Mr. Kinnear left. Likely hoping both Grace and McDermott would be gone before Kinnear could assert his authority. 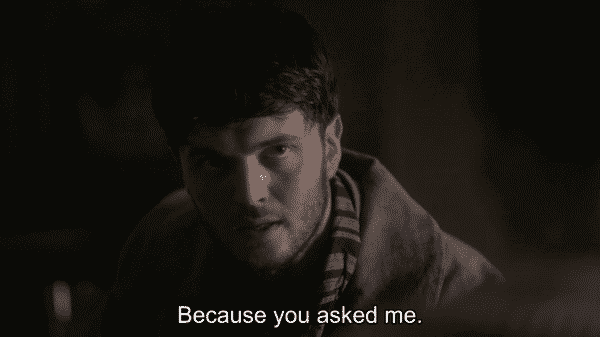 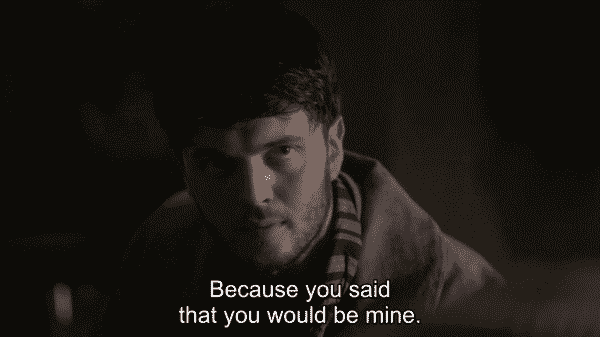 Now, this is when things get muddy. McDermott claims this to be the trigger which brought about a serious desire for Nancy to be killed, and then Kinnear. The trade was to be Grace’s hand in marriage, and body of course, for their murders. However, Grace claims McDermott came about this all on his own and perhaps watching Nancy be cruel to her person was part of his trigger.

Then comes the next part which is questionable: Who ultimately killed Nancy? Though McDermott hit her and threw her down the stairs, what she died from was being choked with Grace’s handkerchief. But whether it was Nancy who did the deed, as McDermott says, or McDermott, as Grace recalls, is the question.

Though what is clear is that after Nancy’s death, Mr. Kinnear was shot, by McDermott, within minutes of returning home. This was promptly followed by all the possessions he and Nancy had, that could quickly be taken or worn, stolen.

The Things Which Came After: Jamie, Grace, McDermott 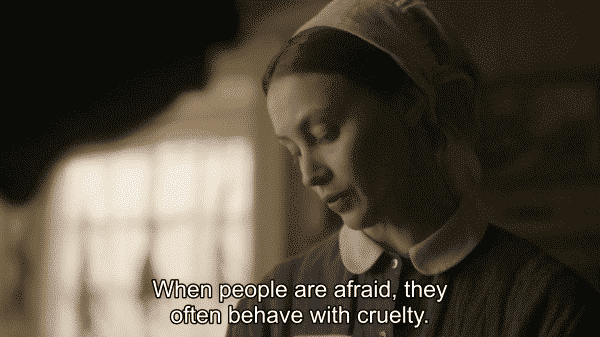 After the murders, the plan was to go to Toronto and then to the states. Nancy portrays this as something she went along with in fear as McDermott makes it seem they were running away together. Who is telling the truth? Who knows. What is known though is that with some money in his pocket, the ego of McDermott escalates and he becomes very visible. Something which likely factored into him and Nancy eventually being captured.

Oh, and in case you were wondering how Jamie played into this all? Well, before McDermott and Grace left he spotted them already prepping for their journey and with Grace in clean shoes and stockings, something a bit uncharacteristic, he put one and one together. Especially as news spread of the murder – especially the gruesome bit of Nancy having her limbs chopped off. 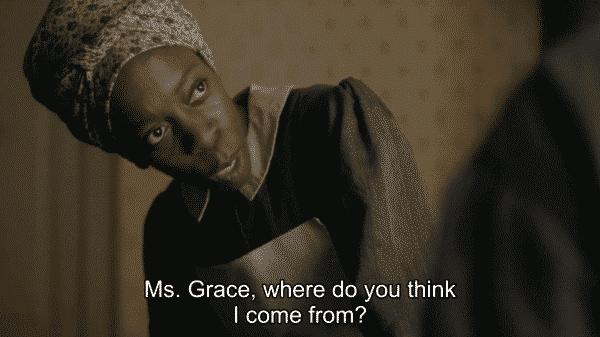 When people are afraid, they often behave with cruelty.

[…] having a thought isn’t the same as doing it. If we were all on trial for our thoughts, we would all be hanged.

It is remarkable […] how once a man has a few coins, no matter how he came by them, he thinks right away he is entitled to them, and to whatever they can buy, and fancies himself cock of the walk. 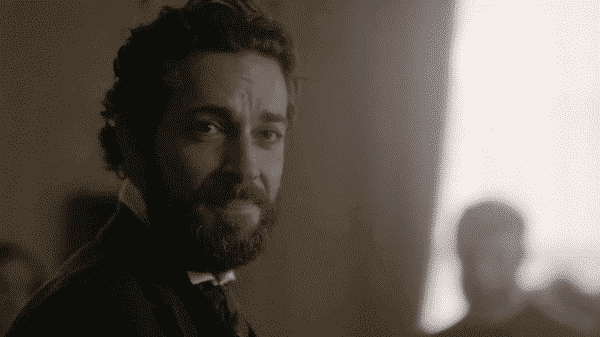 Being that Jeremiah has been the only guy we have seen Grace have mutual feelings for, it is of great interest to see how he interacts with her. Especially as he plans to take part in her possibly getting a pardon. Will this mean she might get a happy ending after a rather tumultuous young life? Or will Jeremiah get exposed and not only lose his local prestige but Grace in the process?

Thus far, it has been clear Grace has been abused and possibly assaulted for being a murderess, if not mad woman, so has she not done the time? Would a happy ending, whether she was just a voyeur or accomplice in Nancy and Kinnear’s death, be uncalled for?

I’ll be the first to admit that when it comes to any series, even with 300 to sometimes 1000 word recaps, I don’t catch or mention everything. So with Dr. Jordan doing cross-examinations, it really helps push certain factors that may seem unimportant in passing. However, when he hones in on them thus there are more questions crafted.

For this episode, it is what really went down during the murder. As of now, we have, technically, 3 different versions of what happened. The first is McDermott’s, then Grace’s, then the story Mr. Mackenzie, Grace’s lawyer, said for Grace to tell. Now, with Dr. Jordan having a written confession, we have something set in stone. Which, while Grace maybe retelling her story, again, the hope with this whole back and forth is that she gets pardoned. So with her noting how she carefully thinks of what to say to Dr. Jordan, and us seeing that in action, so comes the question of who is telling the truth? 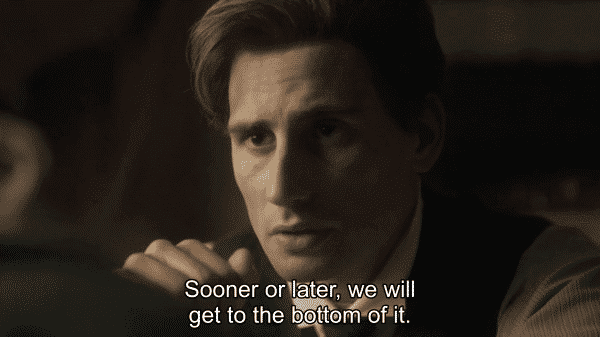 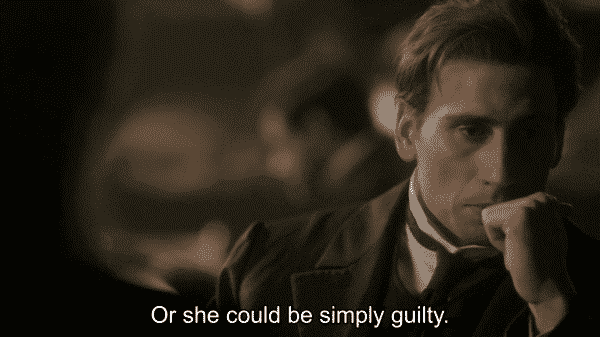 Could it be McDermott was a bit of a bastard and his confession was to make sure Grace hanged with him? Did she perhaps truly lead him on and is a bit of a femme fatale? Or rather, could it be she is as she portrays herself and has become to be seen? A young girl with a noteworthy, but terrible life? One who is delicate and has been simply trying to survive to the best of her abilities?

As of now, there isn’t anything about a second season and this is only supposed to be 6 episodes. With that said, there wasn’t anything really big done to build to the finale. One could argue Jeremiah showing up was the big to do, alongside whether or not Grace may get a favorable report. However, even with Dr. Jordan questioning if Grace is worthy of a pardon, there isn’t something which brings about a giddy feeling. What we are given is something which feels very matter of fact and I don’t know if that should be taken as a positive thing or negative.

Seems some of this recap states “nancy” when the writer means “grace”. Just watching this now but enjoying it.