Wherever I Look
Recaps, Reviews, and So Much More
Home Movies Three Billboards Outside Ebbing, Missouri – Recap/ Review (with Spoilers)
Movies 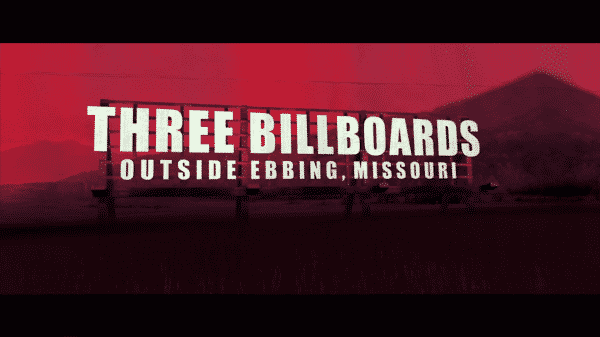 Three Billboards Outside Ebbing, Missouri is one huge redemption story. All of which has origins in the violent death of one girl.

Mildred may not have been the best mother and surely it was hard to be a wife to an abusive twat like Charlie, but she tried. She tried to be fun, loving, but still firm. So when her daughter Angela, mad she couldn’t get the car and was told to walk, yelling about how she would get raped, Mildred didn’t know her responding with “I hope you get raped” would be a wish come true. I mean, who thinks, when arguing with your kid, you can say something like that in the afternoon and the following day you learn your daughter was not only burnt to death but also raped?

But then, to make matters worse, after the case being the big to do for awhile, it goes cold. For almost half a year nothing is said and done but it seems the local Black folk can get all the attention. Whatever crimes they have or have not committed, they can be hauled in, busted up, or what have you.

So, to redirect the attention of local law enforcement, Mildred puts up a series of billboards calling out Chief Willoughby. A beloved officer who, with him having cancer, it puts people on edge a bit that Mildred went out of her way, even got the local news involved, to embarrass the man. Yet, despite the trouble it causes her, even her son Robbie, who isn’t for the billboards, she stands firm. Leading us down a path where, as she pushes for others to help her find her redemption, they find their own. Though some quicker than others.

Charlie with his hand on Mildred’s throat and their son Robbie with a knife at his dad’s throat. Mildred is a serious piece of work. While she occasionally shows the death of Angela hasn’t made her completely ostracized and cold-hearted, like how she plays with Robbie or her interactions with Denise, she is someone hard to love. Her daily demeanor is generally of a “F*** you” nature and as much as you understand her plight, it is hard to not agree the way she goes about it is off-putting.

Not in terms of her putting up the billboards, calling the news, and defending her right to demand answers. More so it is how she deals with people who don’t understand. Which can come off as comical, like this one scene in which she talks about how priest should be held responsible if another member of their religion, gang is term she uses, rapes a boy. Yet, there also comes the moments she refers to Black people as n****rs when talking to Jason Dixon about his love for beating them up. That alongside not being the kindest person to James who really saves her from a moment which could have ruined her life as much as Angela’s death.

Yet, despite sometimes really coming off like the vulgar adjectives people often use for her, it is that rawness which keeps you so invested in her story. This idea that she isn’t some mother who wails and cries at night nor has she gone mad and is out for revenge. All she wants is answers from the people she expects answers from and will mess up whoever thinks, just because the man has cancer, that means he shouldn’t be held to his duties.

Whether it is Mildred and her children, or her very abusive relationship with Charlie. Someone who, even after years of being divorced, is still flipping tables, pushing Mildred to the wall, and having a hand tightly on her neck, nothing is held back. Each relationship, volatile, annoying, or otherwise, has this authenticity that makes you want to check if this is a real story.

Another great example is the relationship between Mildred and Willoughby. As you can imagine, the two are at ends. Mildred is frustrated by months of no updates and with cancer beating him down, having this woman make him look incompetent on the news makes things worse. Yet, there is this pursuit of understanding. For even with her putting up the billboards knowing he has cancer, there comes a point he doesn’t take it personal. With two girls of his own, he gets it. Can’t do much for Mildred, but he gets it.

And it is that pursuit of trying to figure the other person out, maybe redeeming how you are seen in another person’s eyes, which brings this odd vibe. A vibe which, like when Red and Jason reconcile, despite Jason throwing Red out of a window, that gives you this idea that forgiveness is possible. Yet, let me say, while the characters are capable of it, with time, it isn’t always something you can easily accept.

The Pursuit of Redeeming Jason Dixon Which is the case for Jason Dixon. Between him and his momma, no amount of backstory makes you feel bad about what fate throws their way. Jason is open about him profiling Black people, mans the charge about harassing Mildred and anyone involved with the billboards, like Red who sold the advertising space, and it makes his redemption story eye-roll inducing. Especially because the movie starts throwing about a bunch of convenient things to force him to change. The type of things which seemingly are supposed to soften Jason up and lead you to forget the person he was for the majority of the movie.

But, with him not having the kind of balance that Mildred had, even if you try to factor his dad dying, how his mother is, what Chief Willoughby was to him, and similar factors, it is a hard to accept his 180 shift. No matter how hard the film tries or how Rockwell turns on his charm.

Though the movie does seem endless after a certain point, you have to enjoy how raw these characters seem while still containing enough polish to show thought was put into what they say and how they’re performed. And while, yes, the climax dealing with Willoughby and what follows with Jason is a bit over the top and maybe eye-roll inducing. Yet, in the end, Frances McDormand makes it work for her and the character and keeps you engaged and loving her – in spite of her scowl.

Hence the positive label for while this is perhaps the first Oscar-worthy performance, I can recall, this year for a woman. Leading me to think McDormand might be the one to beat right now.