If you liked Netflix’s previous teen rom-coms, The Perfect Date will be the perfect way to start your weekend with some butterflies.

Brooks Ratigan is very much about status. Not in terms of clothes and things of that nature, but he does eventually want to say he owns a BMW, instead of a Saturn. Also, one day he wants to call himself a Yale graduate rather than a graduate from a public university. The problem is, despite his dad’s success as a writer, he doesn’t have connections and also said success didn’t make him rich. Add on Brooks’ mother isn’t around and it makes it so while middle class, Yale’s tuition, without scholarships and more, are out of reach.

Enter Reece who presents the idea of being paid for going on dates, Brooks date with Reece’s cousin Celia going well and using Murph, Brooks best friend since he was a kid, to make the Stand-In App, and Brooks makes money. However, one of the features of the Stand-In app is Brooks becoming whoever you want him to be. Which, in time, causes him to lose himself to whatever each girl wants or needs. Leaving Brooks having a bit of an identity crisis as he begins to lose himself and those who liked him the way he was.

Noah Centineo Is Prince Of The Romantic Comedy 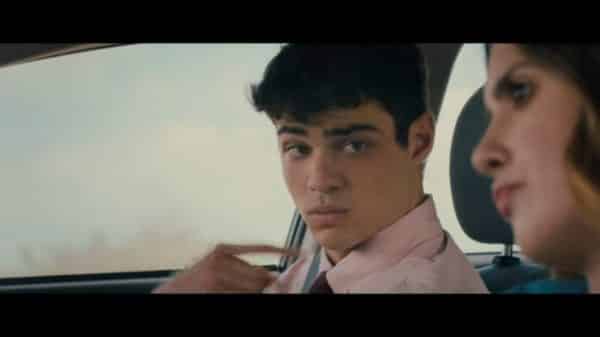 I think we could all agree, Centineo as Netflix’s go-to for romantic comedies, or romance movies in general, was the best move for both parties. For whether he is sharing scenes with Marano or Mendes, who is barely in this movie, you see a connection. A weird sort of longing that either speaks to the prep he does with the actresses or just a natural charm that seems to put them at ease even when they are supposed to be mad at him. Making it so, even though the idea of someone being forgiven thanks to one or two simple acts seems ridiculous, with Centineo, you get it. You understand why someone, no matter how mad they were, would give him another chance.

Brooks & Celia Give You Butterflies

But before all that happens, oh my god you will both love and be envious of Brooks and Celia. For while Celia seems like so many young women in romance movies like this, hard to know but impossible to forget, there is something there. Not to the point of assuming Centineo and Marano are dating, but you can never say he is doing all the heavy lifting. Since, between them, there is a sort of opposites attract thing going since Brooks is unsure of himself and always trying to please, and Celia seems rather firm in who she is. Afraid of that person being rejected, yeah, but relatively secure.

And that dynamic as we see them talk helps you understand what Mrs. Milligan, one of Brooks clients, mean when it comes to everything melting away in conversation. Yes, someone can be handsome, a body like you’ve only dreamed, but that doesn’t matter if you can’t open up to them. I mean, taking note of Leah, even though she brings Sierra Burgess Is a Loser vibes, she shows us that all these preconceived notions we have of people, even of what we want, melt away when we find the right person. Someone who allows us to open up and feel safe in doing so. Even if they do push out buttons a little bit or critique us. I hate this criticism, but it feels true. Being a racially ambiguous person, and gay, makes Murph feel like a token in a sea of white characters. And while I get Mendes is Brazilian in real life, there is nothing about Shelby Pace which pushes the idea she isn’t white in the film.

While Laura Marano Is Great As Celia, The Character Feels Generic

Celia is the type of character who could be in any movie. The reason I say that is we don’t learn too much about her. Her parents seem nice, her mom apparently didn’t enjoy high school, and that’s it. She is angtsy, privileged, sarcastic as hell, yet can be kind. But outside of mentioning she wants to go to the University of Michigan, this film barely builds her up. That is, as opposed to Shelby, who we hardly see, and we learn what school she wants to go to, her major, why, and get a better understanding of her in 5 or so minutes than Celia in the whole movie.

Which leaves Celia, not in the form of a manic pixie dream girl but the kind of trope that seems to be a disservice.

Purchase, Rent, or Get Merchandise On Amazon | Available on Netflix I’m not going to lie, a part of me wants to label this as mixed because of Celia. If only because we should be at a point where both the male and female lead can equally grow versus the male lead gets all this personal development, and the female lead is simply giving him a chance to date her. But that’s the socially aware or conscious part of me talking. The person who just loves watching people fall in love and seeing their story, they’re speaking louder, and that is why this is labeled positive. For, in the end, that is what you’ll remember more than feeling a character is a token, or another was generic. Seeing two people find each other at the right time will be the only thing which stays with you.