The Meddler – Overview/ Review (with Spoilers) 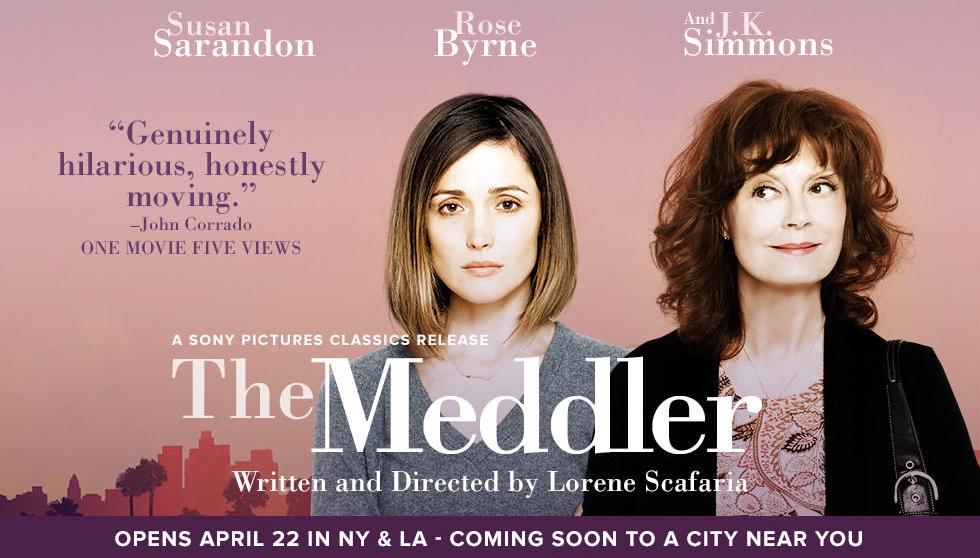 Unless your name is Meryl Streep, who seems to have a new movie annually, consistent work as a lead actress after a certain age is hard to find. Yet, between Hello, My Name is Dorris, The Face of Love, Grandma, and I’m sure many I have yet to discover, women heading into their golden age have been finding the most interesting of roles. This film starring Susan Sarandon is a nice addition to the list. It doesn’t top the aforementioned, but it is something to see.

It has been a little bit more than a year since Marnie’s (Susan Sarandon) husband Joe died, and since then she has pretty much honed all her focus on her daughter Lori’s (Rose Byrne) life. Something Lori doesn’t appreciate for Marnie is absolutely smothering. Making a trip across the country a welcome vacation. But while Lori maybe away, that won’t stop Marnie from being the mother figure so many desperately may want or need. Though, alongside being a mother, she is still a woman. One who may still hold a loyalty to her husband, but has quite a few potential suitors trying to get a piece of her time.

As overbearing as Marnie is, Sarandon figures a way to never make her seem like an outright nuisance. If anything, you see Lori as ungrateful. Especially as we meet characters like Jillian (Cecily Strong) who lost her mom and Freddy (Jerrod Carmichael) who may have a mom but they don’t have the time to actively be in their child’s life how they want. But as a person in general, Marnie is just loveable.

With the movie just 17 minutes shy of being 2 hours, I must admit when it was over I was left feeling kind of empty. Not because I cried or because there was such a relief after all Marnie went through. For, fact of the matter is, Marnie doesn’t really go through anything. She has a daughter who feels smothered by her so she avoids her, and Marnie pushes through that. That perhaps is the big obstacle, getting her daughter to appreciate her. That is, as opposed to Marnie really hunkering down and facing the fact her husband is dead.

Now, who am I to say how someone should grieve? I’ve never been married nor lost anyone significant to me. But with the way Marnie avoided Joe’s family, avoided talking about how to handle his ashes, and pretty much anything which acknowledged his death, you’d think the movie would really address his death. After all, like Lori says, her mom lost her other half and is obviously unsure how to compensate besides investing time and effort in Lori or strangers. Which was nice to watch, and made Marnie the likable character she is, but ultimately you just feel like her journey to, I guess, be open to dating again was just too meek considering all the time we spend with her.

There were times I wanted to question who Marnie was besides this overly nice lady? What did she do before her husband died? Was she just a housewife or did she work outside the home? Also, what made her so nice to strangers? These questions weren’t necessarily nagging issues, but there did come a point with how much she would talk about Joe and Lori that you got to wondering why Marnie didn’t talk more about herself? Past what she did that specific day.