The Killing of a Sacred Deer – Recap/ Review (with Spoilers) 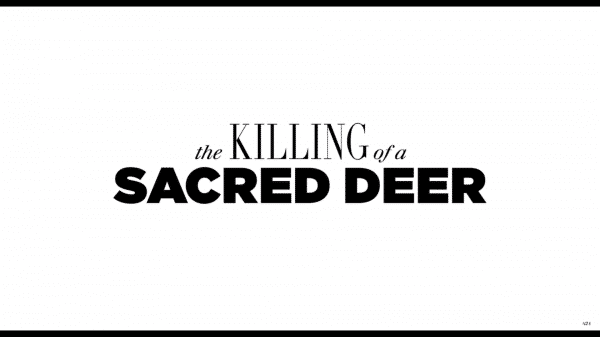 The Killing of a Sacred Deer will perhaps be one the creepiest movies you ever watched that didn’t contain sexual violence.

Dr. Steven Murphy, a little more than 2 years ago, was operating on one Jonathan Lang – Martin’s father, and holds the blame for his death. Not a blame he claims, but one which is assumed. Because of that, Martin seeks out Dr. Murphy and, being who Dr. Murphy is, he takes up time with Martin. However, Martin begins to take things too far. First, it is just by showing up to Dr. Murphy’s office and his car in the parking lot. However, once it becomes clear to Martin that Dr. Murphy isn’t going to replace his father, and get with his mother, so begins a sort of curse. One in which, starting with Dr. Murphy’s son Bob, then daughter Kim, and eventually wife Anna, there is to be paralysis, the end of them having an appetite and then death.

However, this can all be stopped, Martin says, if one of them are killed. For with old testament justice, the slate is clean. Thus leaving Dr. Murphy to make the decision to either kill one family member or watch them all die. And no, he is not an option and killing Martin means they all die. 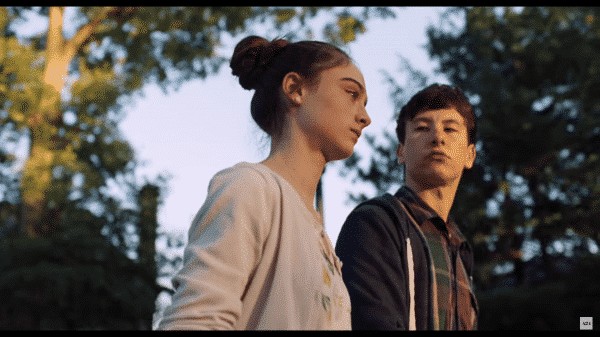 “The most important thing in life is to have good friends. Not lots of friends.” Keoghan as Martin is played so masterfully that I fully expect him to be typecasted. I mean, while, as noted below, he talks as if he is on some powerful dose of Ritalin like everyone else, the way he handles Martin’s obsession gets under your skin. Especially in terms of him popping up everywhere, seemingly honing in on 14-year-old, naive and probably innocent Kim, and really challenging Dr. Murphy’s sanity. Hell, even going toe to toe with Nicole Kidman and, in the scene, treating her as if she is just some young actress he thinks doesn’t deserve to share screen time with him.

To say the least, either everyone is toning down their well know skills to lift Keoghan up or Keoghan got so in his element he eclipsed them.

It’s So Creepy, Yet Kind of Ridiculous

Here is the thing with The Killing of a Sacred Deer, nearly every actor speaks in a lifeless tone. Even the kids, as they are in the process of dying, aren’t freaking out or anything like that. Every single last person speaks as if they are possessed and it becomes eerier after a while. But, as you get used to it, eventually it only benefits Keoghan since his character is so screwed up. As for the rest, unfortunately, the score seemingly is made to compensate for their lack of emotion in crescendos and overpowering their performances.

Something which, at first, you want to get all deep with and say, “It represents the feelings they don’t wish to express since it would imply helplessness or fear.” However, in reality, all it does is ruin the tone of the film and eventually turn dark moments slightly comical. Especially towards the end as we watch Steven spin around with a gun.

Can Entertainment and Realism Co-Exist Well in Dramas?

In the comment section of Liar’s season finale, there was a comment about how it’s entertainment and not real life so to judge something instead of sitting back and enjoying is nitpicking. With that in mind, there comes the question of where is that line? For The Killing of a Sacred Deer, the question has to be asked since, magically almost, Bob and Kim lose the ability to walk, with Kim regaining it temporarily, them both losing their appetite, and then Bob bleeding from his eyes.

Now, when it comes to entertainment, there is the question of, when we aren’t dealing with an action movie, a horror movie, but something which seems largely settled in reality, are we still to not seek realism? That is, an explanation for what is going on. For while there are tons of medical reasons this could happen, being that Dr. Murphy is a doctor, who is well networked, naturally every test under the sun is done and they are all clear.

Leaving you to wonder, was this a curse or did Kim participate? Pretty much, for reasons which don’t necessarily click, Kim falls in love with Martin. I’m talking to the point that at 14, she seems willing to give herself over to Martin sexually. At least, her stripping down to her underwear in front of him, when her parents are gone, implies that. So could it be that she was doing something to keep Bob sick? Even took whatever Martin came up with to force Steven’s hand?

There is this desire to just take things at face value that karma was just coming after Dr. Murphy since he drank the day Martin’s father died. However, it is hard to do that when the program seems like it wants to be taken seriously even when it contains something bonkers.

While we get a strong performance out of Barry Keoghan, it is hard to not be a bit disappointed by Nicole Kidman and Colin Farrell. Them giving these rather toned down performances, which you can’t use a “It’s called subtlety” argument for, bring a rather boring tone to the film as you get adjusted to its creepiness. Add in a score which drastically tries to compensate and it makes for the type of experience that leaves me mixed and thinking you should hold off on seeing this until it is on VOD or DVD.