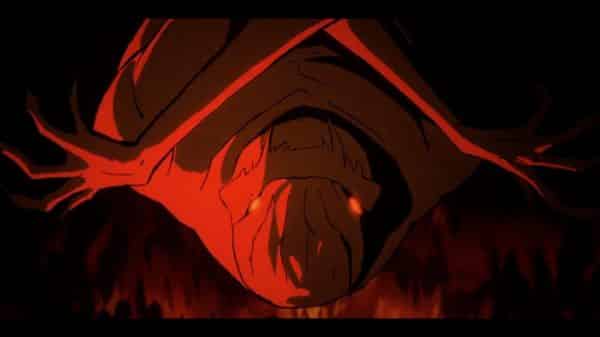 Sucker of Souls is quite gory and a tad bit comical. However, it is towards the bottom of the Love, Death & Robots ranking.

The gist is, three mercenaries, Mr. Flynn, Micky, and Gary escort a doctor and his assistant, Simon, in excavating a stronghold. However, what they weren’t expecting is a vampiric beast which will rip their heads off or peel them layer by layer.

The Gore Is Eye Catching

I enjoy a bit of violence in stories, and one of the benefits of animation is there isn’t really any limit to what can be shown or done. Sucks of Souls takes advantage of this as we see someone split from the first layer of skin to muscle, to bones, and all the layers in between. Giving you a tad bit of a shock, which does help you stay interested until the end.

All It Really Has Is The Gore

Now, while there are a few comical moments, mostly cheap sex jokes, pretty much the main hook with this short is the gore. We don’t really get to know the characters, they don’t have notable relationships, and even when it comes to the gore, there are maybe one or two moments that catch you off guard. However, I’d say they catch you off guard since, like Suits, you don’t usually associate this art style with blood and gore. Especially since the art style looks like what many use for storyboarding.

A part of me almost wants to say to skip this, but it’s only around 10 or so minutes so it isn’t a huge commitment. Plus, I must admit, seeing how one character died, quite graphically, stays with you a bit. Making me wish there was more to the vampire beasts, the relationships between characters, or the comedy. For without that, beyond being one and done, it makes the art style, in the often violent Love, Death & Robots, the only thing which makes this stand out.

“Sing ‘Yesterday’ For Me,” as it addresses the regrets that come with early adulthood, makes you hyper-aware of what is and isn’t going right in your life.
Read more
TV Series

As Ben is asked to deal with the consequences of his actions, all efforts are made to protect him and maintain the idea he is worth protecting.
Read more

“Sincerely Louis CK” is what comes from feeling you have nothing left to lose, so “F*** It.”
Read more
Movies

“Freshman Year” avoids being heavy-handed or eye-roll-inducing about faith. Rather, it approaches a young man’s faith, and decisions, with a realistic tone.
Read more
Movies

“Intermedium,” like most shorts, is an appetizer. And like any appetizer, it leaves you wanting more.
Read more
Movies

While “Go Back To China” may come off as some silly or light-hearted, as it touches upon Chinese culture and family, it goes so deeper than expected.
Read more

In this post are the quotes we collected and .gifs made in February 2020.
Read more
Character Guides

A character guide for Netflix’s “I Am Not Okay With This” featuring who plays who, character descriptions, and more.
Read more

From a mini-series about Madam C.J. Walker to Tyler Perry and Willem Dafoe's latest films, this is The Weekend Rundown.
Read more
Non-Reviews

Jada Pinkett-Smith's Red Table Talk has led to Will Smith, seldom, being shown beyond perfection. Could this cause future issues for the star?
Read more
Non-Reviews

While we liked Charlie’s Angels and could foresee a franchise, let’s be real – it isn’t likely to happen now. Here’s why it probably bombed.
Read more
Non-Reviews