Wherever I Look
Recaps, Reviews, and So Much More
Home Movies Seeing Allred – Recap/ Review (with Spoilers)
Movies

What Seeing Allred presents is that it isn’t just the court in a courthouse which matters, but the court of public opinion.

As many say in the documentary, where there is a high-profile case featuring a woman, sooner or later you’ll see Gloria Allred. But, from that statement, you can arrive at a crossroad featuring two different points of view. Down the more pessimistic road, you can see a woman who is an opportunist. Someone whose agenda is either to be like a real-life Forest Gump

and find herself injected into many of American histories’ big moments, especially in regards to women, or else fitting the perception some may have of Hillary Clinton

. That is, someone who is a bit abrasive, has a big ego, and a love for the camera.

All of which can be countered by a line given by an interviewee: Would you say the same about a man? For, if you go down the optimistic path, what Gloria Allred is truly trying to provide is the type of legal counsel most women don’t have. A fierce advocate whose focus isn’t money or fame but trying to set legal precedents which make it so the hardships women, people of color, and queer folk go through, are just part of America’s sordid history. And unlike some of her peers in the revolution towards feminism, she doesn’t give a damn about being liked as she pursues justice.

For in the end, what Allred is pursuing is the court of public opinion. Through televised appearances in which she is insulted or challenged, this is but fuel for her fire. The type of fuel that, even within her 70s, gives her the energy to, more often than not, go toe to toe with powerful men who may originally drive the narrative, but not once Allred is done with them. For in statements which just deal with basic human decency, she presents what often is ahead of her time declarations. The kind which, as she fights the good fight, shift these powerful men from plaintiffs who try to make her defend herself to men who have to justify their way of thinking and acting, and how they can justify it.

“I think I’m very well understood by many people, and misunderstood by those who wish to misunderstand because they have an agenda that is different than mine.”

“The final stage of healing is using what happens to you to help other people. That is healing in itself.”

Working The Court of Public Opinion/ Not a #WhiteFeminist 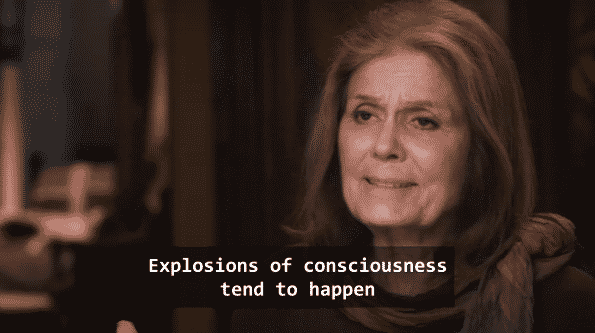 While watching this, I came to realize how Gloria Allred did as Barack Obama

did to win his first term as president. Using the media, for him social media and her the news, they tapped into the court of public opinion and found a way to gain a sense of autonomy. For Obama, it was having direct access to the people and not through the filter of whatever spin the news wanted to have. With Gloria Allred, public appearances were about bringing light to pertinent cases and making the American population, perhaps the world, aware.

One of the examples of that was her going with her friends, yearly, in the state of California, to get a marriage license for a homosexual couple. To some, that could just be a stunt to call attention to herself but that’s the thing, since being an organizer and being pushed to speak, she knows she can easily gain attention. So, why not be a true feminist vs. a #WhiteFeminist and use that privilege and shed light on the issues of sects of the population?

She even calls out her friend on this, not speaking out, and it put their friendship on pause for years. Since, whether it is gay marriage, being an advocate for people who have been sexually assaulted, like she was, or even advocating for people of color, she knows her platform can cause conversation. She recognizes that, as a white woman saying what some consider controversial, immoral, or combative, it gets conversations going and that leads to shifts in the public conscious.

The kind which may take a couple of decades to see what she is trying to wake people up to, but what is the point of living life without a bigger purpose? Why act as if life is like the episode “Nosedive” of Black Mirror? If her peers, and men, refuse to fight and perhaps get called difficult, among other things for it, well there is a reason Gloria Allred came into existence right?

Bill Allred & Becoming a Partner At A Law Firm Though you may consider the difficulty of her talking about her ex-husband to contradict this.

It is noted that what led to Allred going from an educator and union organizer to a lawyer who also acts as an advocate came from ex-husband Bill Allred. Yet, the man is just given his props for putting her on the path and then there is a quick blip about the end of their marriage. We are shown through headlines it deals with fraud, among other things, but with it being a sort subject, Allred is very coy about the details.

The same goes for her law career and education. How does one switch from being an educator to becoming a lawyer, or attorney, as Allred usually refers of herself, into becoming a partner at a law firm? Though Seeing Allred doesn’t shy from neither the highlights or low points of Allred’s life, you can tell certain things get sped through for the sake of time or simply because Allred doesn’t desire for that to be part of her narrative.

Previous to the documentary, I saw Gloria Allred as most attorneys. An opportunist who may have meant well consistently, but that didn’t mean she didn’t enjoy the glory of being part of the conversation and on camera. After watching Seeing Allred however, I’ve come to realize that she does that because writing a bunch of books, giving lectures, and things of that nature, more often than not have you speaking to people who already agree with you. Preaching to the choir, if you will.

However, with being empowered to speak early on, getting reactions, and seeing change, she realized what a lot of people do. The first thing being, if you want something done right, you have to do it yourself. The second thing, while my peers are notable and even formidable, there needs to be someone willing to be confrontational to get things done. And lastly, if you solely argue a case before a judge and jury, you’ll lose. However, if you make a case part of the court of public opinion, you have a better chance of obtaining your desired justice, even if you lose in the courtroom.

And so, similar to how Get Me Roger Stone illuminates how to work the political system, Seeing Allred presents a way to work the legal system to fit your desired outcomes. Explore the public and private sides of feminist firebrand attorney Gloria Allred, who’s battled some of the biggest names in politics and business.