Scary Stories to Tell in the Dark (2019) – Summary, Review (with Spoilers) 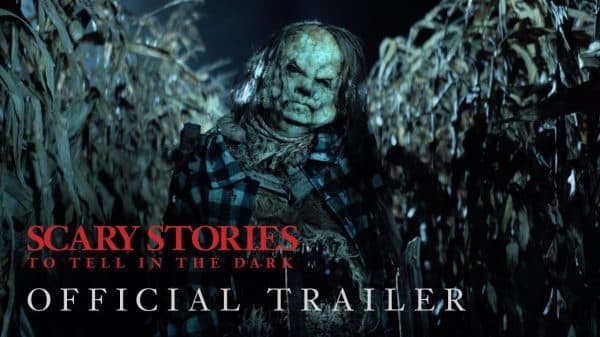 With a few quality jump scares, and two surprisingly emotional stories, driven by Zoe Margaret Colletti, Scary Stories to Tell in the Dark gives you the expected and a surprise.

Scary Stories to Tell in the Dark Plot Summary & Review

1968 Mill Valley, PA – It has been years since the legendary story of Sarah Bellows began in the late 1800s, early 1900s. Yet, kids like Stella, as well as her friends Auggie and Chuck, are among many which keep the tale of Sarah killing children, and writing horror stories in their blood, alive. But, one Halloween night, on the run from local bully Tommy, the trio comes across Ramon. He isn’t a new kid, just someone who originally was just going to pass through town but decided to see a movie first.

However, then Stella and her friends jump into Ramon’s car to hide from Tommy and next thing you know, they invite Ramon to the house of Sarah Bellows and her family. This is when things begin for with Stella, a writer herself, a horror/ mystery one at that, going through the house is a treat. But finding the dungeon Sarah was trapped in is even better. Heck, finding one of Sarah’s books too? Ace.

Yet, with stealing that book, disturbing Sarah’s tormented slumber, bad things begin happening to those Stella knows until she is one of the only people left.

Generally, while horror movies have sad stories involved, usually having someone’s trauma trigger them becoming a serial killer, it doesn’t make you emotional. It just explains the killer’s motive – misplaced revenge. However, Colletti brings something to Scary Stories to Tell in the Dark that pushes beyond that. Through her, Sarah becomes someone who you may get teary-eyed for. Especially during one scene when Sarah and Stella come face to face.

But it isn’t just that moment. There is another when Stella is talking to her dad, Roy, and she is talking about not leaving him. Which is a major thing between them since Stella’s mom left for reasons not dived into. Lack of information aside, in both the Sarah scene and a phone conversation with Roy, Colletti elevates the film past being a handful of jump scares and a vengeful ghost, and tries to tip it into an emotional story about two young women who feel isolated and alone trying to speak their truth. Even if it is heartbreaking to say, hear, and admit.

It Had A Few Quality Jump Scares

Granted, all jump scares in this film you are prepped for with the usual signs. Be it no music, just the sound of breath and footsteps, or Stella reading Sarah’s book which pretty much tells you something is happening within a few minutes. Yet, even with that prep, you’ll still be shook. Maybe not as much as other horror films, but with Scary Stories to Tell in the Dark geared towards those who can get into a PG-13 movie, it is good enough.

It Leaves The Door Open For A Sequel

The spoilers of how and why will be on page 2, but let’s just say Stella doesn’t leave things on the idea of, “What happened, happened and there is no undoing such.” Which, in a way, you want to applaud. But, there is always that need to question if a movie can duplicate what made it so good in its sequel. For considering, as you can likely guess, many things are resolved, so comes the query is they can redirect Colletti to engage another actor as she does and this one and repeat that one-two punch.

Which I say not because I doubt her talent, the writers, or even source material. It’s just the surprise of there being depth in the film will be lost in the sequel. So can they up the ante horror wise yet still give it heart? Particularly heart which doesn’t feel corny or forced?

Scary Stories to Tell in the Dark Overall: Positive (Worth Seeing)

Zoe Margaret Colletti truly elevates this film beyond it being just another horror film, but this time it being PG-13. For whether it is her interactions with her character’s father or the villain, she pushes the film beyond feeling very formulaic and makes it almost noteworthy. Maybe not for the scares or visuals, but definitely in terms of giving us a horror movie that makes its monster’s pain real, researched, and felt. Which, since we’ve started covering horror films, is a rare treat. Hence the positive label.

In the end, only Stella, Ramon, and Ruth remain. Stella due to her saying to Sarah she’ll tell the truth, reveal Sarah’s family lied and it wasn’t her who killed those kids, but the mercury in the water produced by the family’s paper mill. Ramon also lives, thanks to Stella, who stops Sarah just in the nick of time before a man who can detach his body parts more intricately than Mr. Potato Head kills him. As for Ruth? With Stella, Ramon, and Chuck getting to her on time, the spiders which hatched from her face neither kill her or swallow her whole.

Which is why Stella, Roy, and Ruth have hit the open road. For before Stella learned the truth, Sarah had Auggie dragged away to an unknown place, and Chuck was swallowed whole by this strange entity. So, she hopes, there is a way to save them and bring them back. As for Tommy? Well, it seems she may leave him as a scarecrow and honestly, considering he was racist and a prick, is that so bad?

Absolutely. Stella, who is really into horror, could become a researcher of the paranormal who ventures about trying to solve local crimes in order to gain information to save her friends. You know, something of the ilk of The Conjuring universe but not exactly.