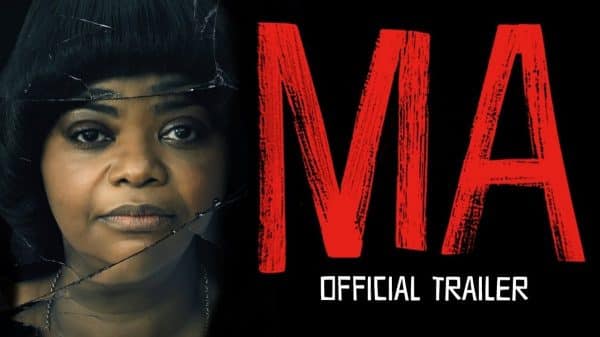 Ma definitely pushes the idea we need more Black horror villains, but ones with villains who have better, or a less inundated, backstory.

Sue Ann has long wanted to be one of the popular girls. It’s what she wanted in high school, and 15+ years later she still craves the attention, the cute boy, and all that comes with that. However, then and now, no one really pays her any mind no matter how nice she is. That is until a bunch of 16-year-olds ask her to buy them beer, and she uses the opportunity to try and befriend those kids, their friends, and make a name for herself. But, whether or not Sue Ann, who eventually gains the nickname “Ma,” may have planned out all we see? Well…

One of the many things you have to appreciate about Octavia Spencer is that she is truly a well-rounded actress. As this film shows, she can bring the drama and a certain sense of depth to a character. Yet, she can also be vibrant, funny, and a bit eye-opening in terms of the things which come out of her mouth. However, one thing she hasn’t gotten to be enough is scary. Yet in this film, she does for older Black women, what Get Out did for white women.

As Sue Ann, Spencer plays the character in a similar ilk as she does many of her characters. She comes off as approachable, non-threatening, like a sister-friend if not maternal figure. Something that easily can play into stereotypes if not cultural norms, depending on where you’re from. So when she flips that switch, shows you the dark side, a part of you is forced to recognize, if you know someone like Sue Ann, every moment they showed a bit of their dark side. And as we see Sue Ann go further and further down the rabbit hole, it makes you want to be more appreciative to the Sue Ann types in your life. If just so they may have mercy on you if they ever snap.

What is a horror movie villain without some childhood trauma, right? Well, being sexually assaulted is what happens to Sue Ann, but it feels like the movie doesn’t make it as big of a deal as it should be. Instead of focusing on that act, they focus on the isolation and her wanting to be popular as the source of her crazy. Which, considering she was led to believe she was having relations (non-penetrative) with one boy and found out it was another, you’d think that would be the source of her hatred. Not that she didn’t get invited to parties and was treated as an outsider – possibly because she was Black.

Genie’s Role In This

Yet, that isn’t the only situation when you think the way Sue Ann was written could have been better. Take her daughter Genie, who deals with the fact Sue Ann has Munchausen syndrome by proxy. To me, it felt like overkill. Not to say I don’t get why Sue Ann would develop this, based on her childhood, but one could argue by giving Sue Ann Munchausen syndrome by proxy, they stole what could be the redeeming factor. That thing which could have made it so Sue Ann wasn’t a complete monster but simply desiring revenge and finding the stars aligning to do so.

Which isn’t to say Waivers is at all to blame. I’m glad to see her get work beyond Queen Sugar, and her performance leads me to hope she may get to work with Spencer again since they had a good dynamic. Particularly since, even before you learn who she is, you feel something for her and even hope that the lead character, Maggie, and her might become friends. If not Maggie being one of the few who ask about her as she becomes friends with Haley and Andy’s crew.

The Teens Of The Movie

Like Viola Davis with the actors on How To Get Away With Murder, Spencer is giving when it comes to her scenes with her young peers. However, on their own, they give you generic horror movie tropes. We got the ever so innocent Maggie, the “slutty one” in Haley, the token minority in Darrell (who gives Ma her nickname), the generic hot guy in Chaz and the first love in Andy. Of all these characters, no one is written or performed to go beyond what you expect. Making it so, in the long run, you realize Spencer’s talent is what makes the movie seem better than it is, and it having nothing to do with the script.

The main reason to see this is Spencer getting the opportunity to play a villain and clearly having a good ass time in doing so. For if it isn’t the obsessive nature of her character, it is her having fun with the murders and getting to do more than be the maternal figure or sassy best friend. Which is so enjoyable to watch that it makes you hope this isn’t the first and last time she plays a role like this.

Which leads to why this is being labeled as divisive. For while you do enjoy Spencer’s performance, unfortunately, the writing seems geared for an actor who would need more written on the page to flesh out the character. Combine that with the teens of the movie not bringing anything different from what we’re used to, and it makes what could have been an awesome movie to something decent. I’d say a movie not to see opening night, but definitely when things are at matinee prices.