Long Lost will slowly, but surely, make you question what is happening as things for our lead, Seth, go from weird to you verbally saying “What the f***?”

24-year-old Seth suddenly finds himself invited by his older brother, Richard, to this secluded, 17-acre property, to finally meet. To say their first real encounter since Seth was a baby is awkward would be an understatement. For with Richard very alpha in his interactions, a pinnacle of toxic masculinity, Seth finds him to be off-putting. Making it so the only pro of sticking around would be Abby, Richard’s girlfriend. However, as she, like Richard, begins to make Seth question his sanity and reasons for sticking around, this weekend visit increasingly seems like a bad idea.

Don’t thank someone for giving you what you earned.
— Richard 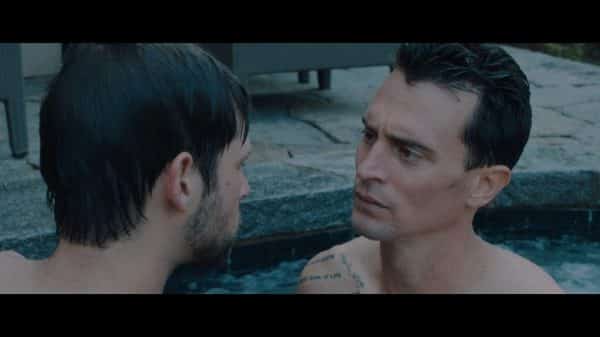 One of the main reasons Long Lost may feel a bit off-putting is because Tucci plays Richard like a psychopath. The kind you’d imagine hitting himself whenever he loses and breaking things. However, Tucci doesn’t take things that far. Nothing gets broken, and instead it is the intensity of his stares, how cavalier he talks about sex with Corcoran’s character, and how he honestly seems like he’ll harvest Seth’s organs or kill him in his sleep. Thus creating this atmosphere of you waiting for something crazy to happen and being on edge for most of the movie.

But while Tucci’s intensity freaks you out, Corcoran helps bring you down from the point of thinking this might be a little bit too freaky for you. Granted, it is by being the kind of female lead who is partly defined by her sexuality. However, without giving anything away, you learn there is much more to her than that. Not just in terms of her being bilingual, knowing how to code, and being more than a love interest. Let’s just say as simple as she may appear, perhaps made to be a titillating figure, she is definitely one to keep an eye on.

The main issue with Long Lost’s ending is that it seems like overkill. Considering all that Richard does and says, and how Abby leads Seth to think he is the weird one of the scenario at times, what comes at the end is just too much. Mind you, it wasn’t necessarily expected and shifts things in a way which could seem interesting. Yet, in the moment of the reveal, rather than again say “WTF?!” in a good way, you may end up saying, “Really?” as you start to feel the film is veering towards doing too much.

Like many films which are a bit of a mystery, and a horror element, the ending is what either acts as a stab in the heart or the final “WOAH!” which makes you clamor to tell everyone what you just watched. Unfortunately, the ending for Long Lost maims the film but doesn’t kill it. For the combination of Tucci and Corcoran outweigh an ending that makes sense yet feels unsatisfying.

Leading to why the positive label. Though I may not be fond of the ending, it is only because it followed a really jolting moment and threw ice on it. Yet, what Corcoran and Tucci do for this movie honestly will make you never mind the ending for the ride up to it was way too much fun.

Though I may not be fond of the ending, it is only because it followed a really jolting moment and threw ice on it. Yet, what Corcoran and Tucci do for this movie honestly will make you never mind the ending for the ride up to it was way too much fun.