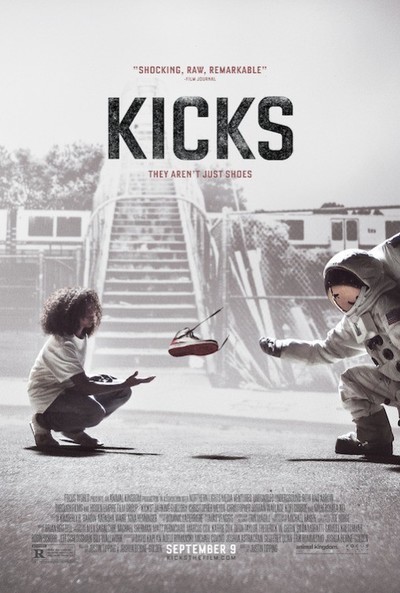 After hustling for a little while, a kid gets a nice pair of kicks which are stolen by a local hoodlum. Leading to a journey to get them back.

Brandon is poor. So poor that while his friends Rico and Albert have a fresh pair of kicks, Brandon’s look like he got them at least one or two years ago. So with him hustling candy bars to get some nice shoes, naturally when someone takes them he wants to get them back. Problem is, the person who took them is Flaco. A local hoodlum who is definitely about that life but can Brandon step up, either with help or on his own, and take back what’s his? Or is he still a boy and not yet a man?

This Movie Will Get You Hyped

I’m not sure who of you out there may have gone to an urban movie, in a theater which mostly caters to Blacks and Hispanics, and had that one person who decided to vocalize or express how a particular scene made them feel. Well, let me tell you that person may end up being you with this movie. Something about the way violence happens, the way jokes go down, and how the characters interact is very authentic. To the point you almost one to join in and comment as if they going to look at you and laugh, tell you to shut up, or something like that.

The Topic of Manhood, Friendship, and Innocence

In the film, there are not real roles for women. Pretty much it is all about the friendships between men, loss of innocence, be it with sex or violence, and what it means to be a man. We see this in a few ways. The first, and unfortunate way, deals with the boys having sex or getting with a young woman. Like many a coming of age film, sex is a symbol of manhood but, unfortunately, the film is an example of toxic masculinity. Perhaps making you wonder why this is a highlight? Well, because in the movie you see how such a thing forms.

Take Flaco’s little brother, or son, Jeremiah. From what it seems, Flaco takes that kid with him everywhere. Be it him going to a party to get high, drunk, and maybe feel up on a shorty, or to watch people ride around in cars. The boy, who can’t be older than 10, observes, absorbs, and with him singing a lyric, seeing how comfortable he is around guns and violence, you see how Flaco has normalized that in his life. Making it so, even at such a young age, his innocence is gone. Naivety about the life Flaco lives is not only non-existent but discouraged. Manhood is presented as taking what you want, defending and keeping what’s yours, and violence is a norm and not a last resort.

When you watch the credits you’ll see the name of a few girls like Alexa and Mercedez, but will have a hell of a time trying to remember who the hell was that. Reason being, women solely play the role of someone to mess around with in this movie. If they aren’t grinding up on someone, they are as ghetto as possible. If they aren’t in the process of having sex, they are about to. I mean, to my surprise we didn’t end up seeing a crackhead saying they would suck one of the leads members for a dollar.

But to add insult to injury, we don’t even get to see Brandon’s, Albert’s, or Rico’s mom. The only mother, much less woman, who isn’t problematic is Brandon’s grandma and she has a non-speaking role and is bed ridden.

It’s All About Sneakers

It all really boils down to sneakers. If you dig deeper you can find other things to note and talk about but, no matter how you look at it, Brandon’s passage to being the local definition of a man came from some sneakers. Of which, so much nonsense happens that, paired with the negative depiction of women, it makes it hard to say, without pause, you like this film in such a politically correct world.