Home Movies Into The Dark: My Valentine – Review, Summary (with Spoilers)
Movies

Into The Dark: My Valentine – Review, Summary (with Spoilers)

“Into The Dark: My Valentine” seems like it is inspired by the life of internet/music stars Poppy, Titanic Sinclair, and Mars Argo.

Valentine, at one time, was an up and coming pop act thanks to the help of her former boyfriend, Royal. However, due to him being insecure, possessive, and abusive, she leaves him. When this happens, she learns all the music they worked on together he put in his name and then, with a girl named Trezzure, he recreated Valentine and makes her into a success.

But, while Trezzure has had one successful album, she needs a second one so Royal, knowing Valentine could deliver this, he tries to convince her to work with him again.

So let me explain, the way Royal comes off mirrors the story of Titanic Sinclair, who used to date Mars Argo, who many would say was the inspiration that created Poppy. Someone who had a similar look, sound, and was very much under the control of Titanic Sinclair who pushed the idea he was the mastermind behind it all. All of which is better explained in the video below.

So, taking note of the storyline of “My Valentine,” you could easily see this as something inspired by Mars Argo and Poppy’s story – with some changes. Such as Valentine, the original, coming back, which Mars Argo has not. But, overall, Levin’s work feels like a crazy “What If” of epic proportions that seems dreamed up by a fan with an interesting, yet twisted, vision.

Nick, Rosa, Allison, Trevor, Dave and Pretty Much Anyone Beyond The Three Lead Characters

From Trezzure’s fans, who are awkward, in a multitude of ways, to Nick and Rosa, who could easily have been cut from the film, “My Valentine” has a whole lot of fat, in terms of its cast. Which, for some, might help give a bit of a break from Royal going off the rails. However, for others, dealing with this borderline so bad that they are comical characters, it may take away from the threat of Royal knowing, without Valentine, Trezzure’s career could be over, and his in extension. 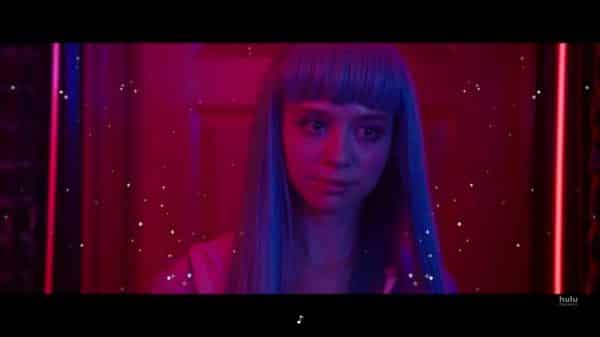 While bloody and an interesting story that feels very much inspired by Poppy, Titanic Sinclair, and Mars Argo, any and all focus on non-core characters feels like time wasted. For as much as Trezzure’s Trezzury could be seen as comical, and the others help enhance how crazy Royal is, ultimately, they feel like distractions. The kind that, if omitted, could have been replaced with more time to dig into Royal, Trezzure, and Valentine’s psyche and past. Be it as individuals or as couples.

“Into The Dark: My Valentine” Ending Spoilers

In the end, Royal kills three people. One being Valentine’s best friend, Julie, who may or may not be in love with her, then the bartender, and lastly, Nick. All of which Trezzure seems to be fine with for, in the end, all she cares about is Valentine standing down and letting her continue to rise off her work. This is shown by, even after Trezzure kills Royal, and acknowledges he was abusive, her threatening Valentine.

But, with Trezzure standing in a pool of Julie’s blood, and a live wire being sent in her direction, Trezzure dies, and Valentine uses her base to reintroduce herself and use Trezzure’s fame to be where she was supposed to.