Get On Up – Overview/ Review (with Spoilers) 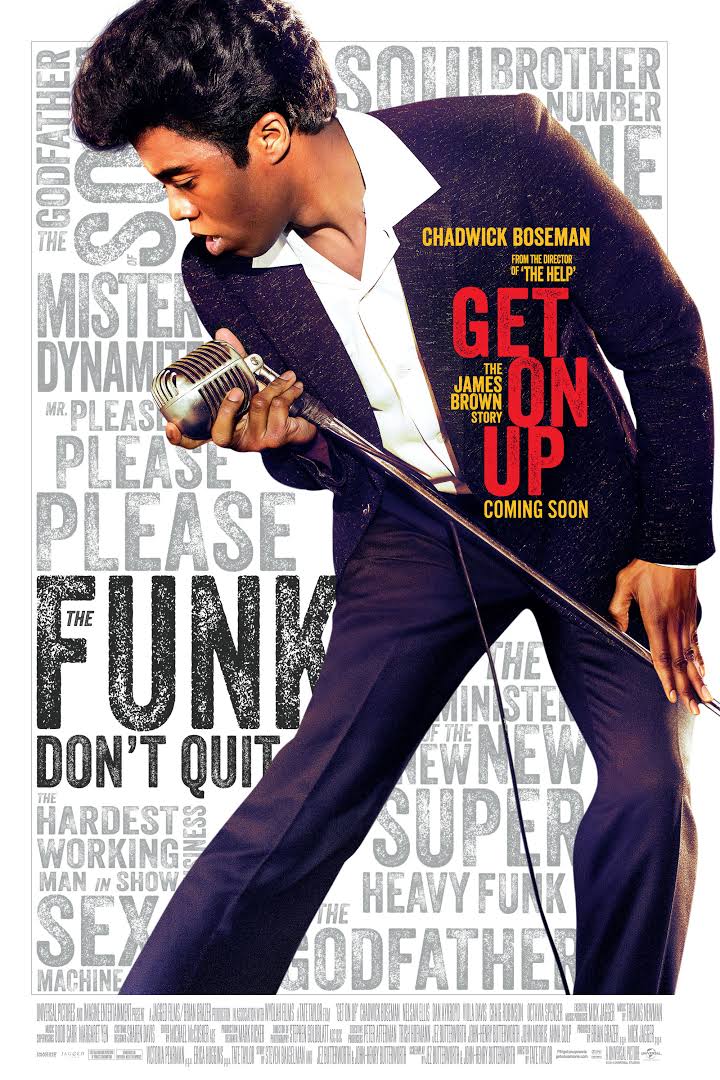 While most biopics seek to both educate and entertain you, as well as show you the soul of an icon, this film strangely skips out on giving you soul and solely focuses on the entertainment part of Brown’s life, with a sprinkle of his triumph and demons.

James Brown has been buried nearly a decade and damn if Chadwick Boseman doesn’t make you think he rose from the grave. He has the tenacity, got the moves of Mr. Brown memorized, and is joined by an almost who’s who when it comes to Black entertainers. You got Mr. Nelsan Ellis, as Bobby Byrd; Viola Davis as James Brown’s mama; Craig Robinson as a member of James Brown’s band; Octavia Spencer as one of Brown’s maternal figures, Aunt Honey; Ms. Jill Scott as one of James Brown’s wives; and the lovely Ms. Tika Sumpter who plays one of James Brown’s backup singers. Leaving the question: does Boseman capture Soul Brother #1 or simply puts on a performance? Read on below.

From childhood to his comeback in the 1990s, that is the story we are presented when it comes to James Brown (Chadwick Boseman). A man abandoned by his Mom Susie (Viola Davis) and dad Joe (Lennie James) before he probably even hit puberty. But, thanks to Aunt Honey (Octavia Spencer) he may not have had everything a boy could want, but he at least had a roof, a job, and a meal. Well, until he got himself in trouble and landed in prison. Though, as always in Mr. Brown’s life, whenever life decided to toss him away someone came to his rescue. That someone being Mr. Bobby Byrd (Nelsan Ellis) who, alongside Little Richard (Brandon Mychal Smith) seem to be the ones who jump-started Mr. Brown’s career, and between Mr. Byrd and Ben Bart (Dan Aykroyd) they supported this young man without much and guided him through decades, generations, and various monikers, to be James Brown: The Godfather of Soul.

When it comes to biopics, especially of musicians, there is always the question of how to balance the music, the musician, and the demons they faced. Well, for Get On Up not much seems to be held back. We see James at his highs touring the world, buying jets, and wearing fur coats, just as much as we see him at his lowest points where he is getting chased by police, his ego pushing people away, and even beating on his wife. All with the soundtrack of his life playing along and us watching Boseman imitate, to the best of his abilities, the stage persona and dance moves of Mr. Brown.

And really, his performance is truly a highlight of the movie for he makes James Brown funny. Be it his way of mimicking James speech, breaking the 4th wall and talking to us, the audience, directly, or just saying the type of off the wall type of things that would make anyone laugh, Boseman definitely possesses the entertainer side of James Brown to a T. Though he isn’t the only one deserving of praise. For while Ms. Viola Davis doesn’t have a huge role in the film, she is one of the few I truly believe showed the soul of the individual she played. Susie, as she says in the film, wasn’t planning to be a wife, a mother, and didn’t know much besides being country, though she did have the strength to somehow walk away. Something which left a scar on James Brown which we repeatedly see the effects of in every interaction Boseman has with his fellow actors. Thus certainly creating a very entertaining 2-hour experience.

But, despite this film being about Soul Brother #1, there ain’t much soul in the film. As Boseman copies James Brown’s moves he loses his charisma since it seems he is more focused on remembering the steps than losing himself to the actual moves. And while Boseman nails making James Brown funny, I felt we never got to see the soul or heart of James Brown and, if anything, all we were given is the emotions you expect to see and don’t get the emotions you expect to feel. Meaning that, you will see Boseman sad and cry, yet it never hits you in the gut and make you cry like you feel you should. Which partly can be faulted to the film’s chronology which does establish time periods, but the overall narrative makes you wish you could move pieces around like you would organize furniture or words in a sentence. So that there would be  a real flow which not just entertains you, but hits you emotionally.

The issues with Get On Up is as much as it features the demons and trials of James Brown’s life, neither Boseman or anyone of the cast really, except perhaps Davis, really seems capable of drawing you into their character when things aren’t laughs and giggles. For while Boseman surely puts on a performance, and makes Brown so funny he almost seems like a caricature, when it comes to showing us the man, not the entertainer, I feel there is no soul behind Boseman’s words and eyes. Just an actor performing a part of a legend, without making the performance itself legendary. Hence why the TV Viewing label. For while Boseman does entertain, has the moves down, and will make you laugh, he and the majority of the cast don’t help the audience feel their emotions, they just show us.

I think, come award season, Chadwick Boseman certainly should, and likely will, get a Golden Globe nomination. But this isn’t an Oscar worthy, be it nominated or winning, performance. The same goes for Viola Davis. She shows she is a veteran, but isn’t given enough time and development to really show out.