Raunchy in a way that will surely not make her for everybody, Nicole Byer defiantly shows a different brand of being a dirty comic.

From bemoaning being single to talking about the things which have made her moan, Nicole is the type of comic who will remind you of that one friend who doesn’t believe in boundaries. Yet, as she talks to you about a hospital visit she had, the Karens she has dealt with, small-town experiences, and more, she’ll either win you over or gross you out to the point of being unable to finish.

You Eventually Warm Up To Her

Mind you, some of them are pandemic related, which doesn’t necessarily help her case, but as she talks about glory holes, a hospital visit she has, and her theories on Harry Potter? She wins you over. For it seems once she switches from venting about the lack of sex she has, to talking about things that may veer towards gross-out humor, she is hilarious and may even make you think a little bit.

While Not A Niche Comic, She Isn’t For Everyone – Especially If You’re Not Into Vulgar Sex Humor 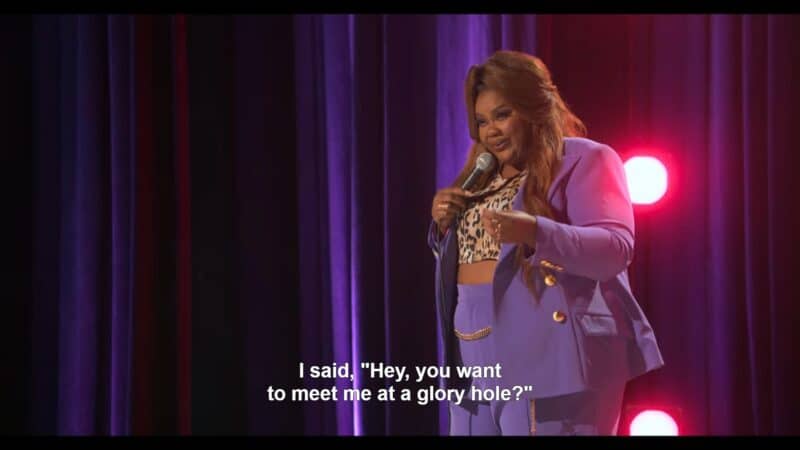 Let’s begin by saying, at the very least, Nicole doesn’t joke about having blackout sex like many of her white female peers. Yes, you will feel inundated with sex jokes, but the weakest ones are at the beginning and the end, and she occasionally gets creative with them. More often than not, it’s just because it is a subject matter done to death, especially as female comedians have pounced on doing the material men have but from their perspective. Which, more power to them, but for Nicole, unfortunately, a notable amount of her sex jokes lack punch. I’d even say they would potentially have made decent social media posts but surely weren’t worthy of what is considered a special.

And granted, with a lot of Nicole’s sex jokes and body humor, you’ll appreciate that she doesn’t take herself seriously but doesn’t put herself down to get a laugh. But, let me tell you, those first ten or so minutes, until she talks about the Black Lives Matter protest and speaks to an audience member, are rough. Heck, she really doesn’t get you to commit until she talks about going to the hospital, which was the turning point of the special.

Our Rating: Mixed (One & Done)

By no means a classic but not something that should be considered more of a taping than a special, Nicole Byer: BBW (Big Beautiful Weirdo) is an experience. One more so geared towards those familiar with her comedy or her stint on Girl Code than her work on NAILED IT! Mainly due to this being a TMI to the max kind of comedy special. The type where you are presented with the idea they feel like you can take it or leave it, and they are not trying to appease anyone who doesn’t get them or is willing to laugh with them.

Hence why we’re sort of mixed on this. Yes, this has many bright spots, as mentioned above, but to get to those peaks, you got to trek through a lot of jokes that I’m sure her long time audience will love but, for those like me who are used to her being more censored on Comedy Central or Girl Code, this might be a bit much for you.