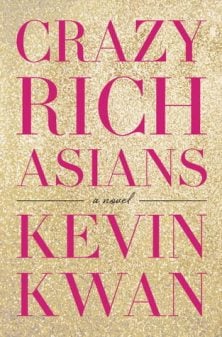 While the level of detail in descriptions and family history can be overwhelming, once you get into Crazy Rich Asians, you’re hooked.

The story of Rachel and Nick is a love story. One which, as the many trailers for the movie adaptation show, Rachel had absolutely no idea Nick was wealthy. To her knowledge, he was just another guy who taught at the college. One of the first Asian guys she has dated in a while, might I add. However, between his upbringing in Singapore and his delicious English accent, Rachel is wooed to the point they end up dating for years.

Leading to, when Nick’s best friend since they were children get married, Colin, he decides to take her home on a summer vacation. Problem is, word gets back to Eleanor, Nick’s mom, and she decides there is no way in hell her son is going to be with, never mind marry, some no-name girl who is likely a gold digger. For, what you have to understand is, name and wealth mean everything in this book.

Yet, it also can ruin a lot of things. For while Eleanor tries to dig up dirt on Rachel and sabotage her and Nick, Astrid is dealing with her husband Michael. Someone she loves deeply but makes her feel the need to be secretive about her spending. Especially since she, unlike Michael, is wealthy and is well known as a fashionista. I mean, during Colin’s wedding, his wife, Armanita, she gets so offended when Astrid doesn’t do it big as if that would have been validation that a wedding already 10s of millions of dollars would have received real validation.

But, going back to Astrid, her story focuses on dealing with Michael possibly cheating on her. And there are so many other stories involved in this 403-page book. We got cousin Eddie who bends over backwards to impress his family, and is verbally abusive; Colin and Nick spend a lot of time together and Nick helps Colin keep himself from drowning into a depressive state; there is Rachel, without Nick, spending time with her friend from college, Peik Lin, as well as dealing with subtle, and not so subtle, abuse from Nick’s family; and then there is Rachel’s mom,  Kerry, who closes out the book with her story.

Thus giving you what sometimes feels like a Game of Thrones

styles novel with so many families, so much drama, and while no one may die, oh do they try to destroy your reputation and discard your existence.

When it comes to novels, I haven’t read many which jump from point of view to point of view. At most, like Eleanor & Park, I may go between two different perspectives that deal with just two takes on the same situation. So, reading a book that focuses on Nick’s perspective, jumps to Rachel, Eleanor, Astrid, and then others for maybe a chapter or two, it did get a little jarring – but it becomes appreciated.

Reason being, on their own, a lot of these characters’ stories becoming boring. The first that comes to mind is Astrid’s husband, Michael, being accused of having an affair. For as much as you recognize how terrible and embarrassing that is for her, especially since she seems nice, that being the worse that can happen to her kind of makes it seem like nothing. Losing Michael won’t mean she is destitute. It just means her reputation, the family’s, will have a blemish on it. Something that, compared to a lot of novels, isn’t that big of a deal at all – at least in terms of books I often read.

Then, in terms of our star couple, while Rachel is adorable and goes through hell, I must admit, if this book had to be split into a trilogy, which sometimes feels, just in this book, to go into an exuberant amount of detail, we should have started at the beginning. I’m talking, building up Rachel to the point that, this book doesn’t so much seem like an ensemble but something focused on her featuring chapters specifically about people she encounters and their lives outside of her.

The reason I say that is, be it because I just don’t find the rich fascinating or, as noted, maintaining a reputation, there is a part of me that needed Rachel more. For Astrid and Eleanor’s worries about how something would look and embarrassment, that can’t support a whole book to me. The more interesting tale is this fish out of water, who came from a middle-class, immigrant, family, and is now coming into the world of old money and tradition which makes it clear she is interesting but doesn’t belong.

Yet, the main thing we get sold isn’t necessarily that but status. Something that loses its luster quicker than fake gold. Making the fact this book switches between a handful of characters, chapter by chapter, sometimes 2 – 4 within one chapter, sometimes a blessing. For even if their drama isn’t that interesting, the switch does help for when the book starts to lose you.

One of the weird things about this book, for me anyway, is that, despite finishing it and it ending on an unwritten “To be continued” I have no desire to read China Rich Girlfriend

. More so, and I know this may sound strange to book readers, I’d rather just watch the movies. For as lovely as it is to hear so much about the architecture, design, how lavish the food is, and all that, it becomes too much. All that fluff you recognize is necessary and presents the tone of extravagance these people live, but it sometimes leads you to want them to get to the point.

Which is why this is being labeled as mixed. While you do get drawn into their world, eventually, like Rachel, you’re just over it all. Not even because you come to no longer enjoy the pettiness or drama, but because there isn’t any ante being upped. There isn’t that certain something which keeps driving you forward beyond finishing what you started. Then, add in the ending doesn’t give the kind of payoff to push you to want to read the next book? Especially since the ending feels unfinished, like there should be more chapters, and it is frustrating. So frustrating that it makes you feel like, I’d rather watch the movies for they have to get to the point, I can visually see all the excess, the actors can bring something just reading about these characters doesn’t do, and it’ll demand less of a commitment of my time.

Check Out Other Book Reviews

Leah on the Offbeat (Book) – Recap/ Review (with Spoilers)