Act I of Shadow of War is basically a 4-hour reintroduction to the basics of Middle Earth franchise and Monolith showing off its new added trinkets. Leading to mixed results.

Play Through Time: 4 Hours (Includes all side missions)

After the events of Shadow of Mordor, once again Celebrimbor makes a ring in order to get retribution against Sauron. However, not too long after the process, he somehow ends up a captive of the Great Spider Shelob. Someone you have to trade the ring of power in order to get Celebrimbor back. A move he whines about for the entirety of act one for he feels it was stolen from him.

Yet, while Celebrimbor hates Shelob, with all his wraith heart, Tailon finds her useful. You see, Shelob provides visions, at no extra costs. Visions which Tailon believes could lead to the saving of Minas Ithil and the humans who still inhabit the city. Much less, will prevent the Witch King from gaining the Palantir. An item men cannot wield without succumbing to death, but for those all-powerful, it grants them a sight to see all and damn near know all.

Unfortunately though, despite Shelob’s visions and all you do, the Palantir still falls into the Witch King’s hands and Tailon nearly becomes part of his army. That is, until this person who identifies themselves as “The Blade of Galadriel” saves you, as well as Shelob. Leading her, perhaps because she’d rather be powerful and neutral than powerful and a target, to returning the ring to you. Thus allowing you to begin act II in which you get to do what was the selling point of the game: Building your own Orc army. 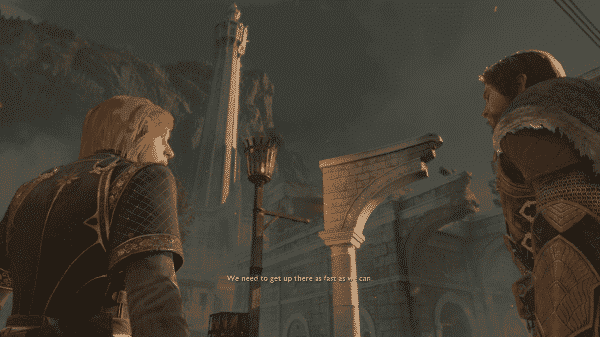 In Shadow of Mordor, in retrospect mind you, there was only enough of a story to push things along or introduce gameplay features. With Shadow of War, however, you get a better sense of you actually fighting for something more than another opportunity to massacre a slew of orcs. Now, you are fighting for something beyond yourself or a bunch of pocket groups of humans. In this game, it is like you are fighting for the last of mankind and your shared history. As if, maybe, if you don’t proceed as fast as they need you to, you may return to see all new allies dead and nothing but orcs and the likes remaining.

Now, granted, Shadow of War is linear so it isn’t that serious, but a sense of urgency was nice compared to Shadow of Mordor where I can spend my days hunting insects. 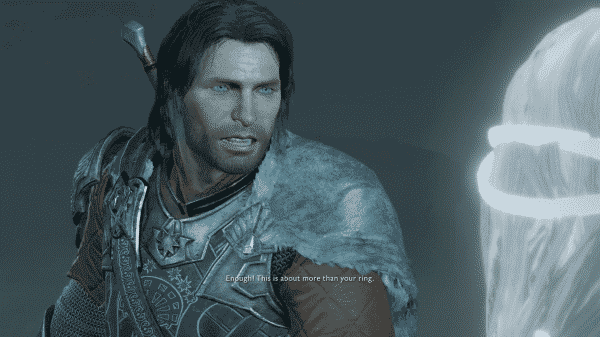 There was something cool, perhaps even bad ass about Celebrimbor in Shadow of Mordor. However, between him getting captured and repeatedly whining about getting his ring back, which even annoys Tailon, it makes you wish he was a silent ghost.

It’s always nice to have a certain amount of control over your character. How they look, what skills you can choose, and things of that nature. However, when it comes to games with simple button mashing combat, so comes the question of why make the combat so simple and deep dive into making your inventory potentially complex? Such as certain cloaks having certain status effects, if you complete a challenge, being able to add gems to your weapons, and things of that nature?

All of which, unless you get a certain skill, you have to hold down a shoulder button just to pick up. Which, assuming you are the type who usually get overwhelmed by orcs, is a pain in the neck. Making the fact you have to get one skill and said skill is at the end of a skill tree, nonsense.

There Is Nothing Revolutionarily Different Presented in Act I

Tailon: I’ll give them a show to remember. Me: The only thing I remember is paying $60.00 for this.

When it comes to Video Games, outside of graphics, usually the underlying mechanics don’t change much. Despite years between games, franchises like Fallout and Grand Theft Auto don’t make huge leaps and jumps. In many ways, all that changes is the location, characters, and maybe you get an expansion pack like vibe when it comes to new weapons and vehicles. Shadow of War is very similar to that.

First off, combat pretty much feels the same and you’re basically button mashing until you have to counter or have the ability to do an execution. Moving about, there are still times if your positioning isn’t just right, Tailon will look over a small ledge as if you are asking him to jump off of a mountain. Then when it comes to all the war chiefs and captains, while you do have to give Monolith Productions props for now having the AI adapt and block you from repeating the same routine over and over, at the same time, it still gets repetitious as you get hours into defeating one eccentric orc after another.

“You will deliver what was promised”

Taking into account that Act I seems about reintroducing Shadow of Mordor players to the game, or acclimating new players, I don’t think you can judge Shadow of War on Act I alone. For with it basically being a tutorial act, showing us the nonsensical additions that don’t really add much besides things to collect, it is just a warm-up. One I think may make those new to the franchise maybe not understand the hype, and those who came from the predecessor frustrated with how they got to regain all their skills all over, but the fun is yet to come.

So here is hoping Act II, which features all the things Monolith’s live streams featured, makes this game really worth something. That is, besides a modern-day expansion pack feature new worlds, a few new characters, but everything else pretty much the same.