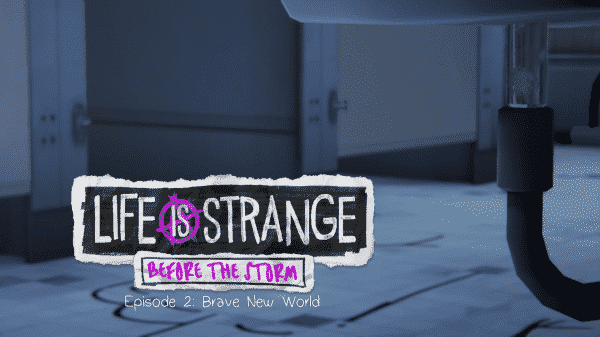 Life Is Strange: Before The Storm continues to be the rare example of a prequel which doesn’t seem made for money but to flesh out a beloved character.

In episode 2, we traverse the day Chloe got expelled from Blackwater Bay Academy and when she learned David was moving into her home. Alongside that, it happens to also be the Saturday Chloe finds her truck. The one which was supposed to get her and Rachel freedom. A freedom we know never comes for as we grow closer to Rachel, to the point of looking like an idiot, even kissing, there remains the cruelty of knowing her ultimate fate. One we haven’t even begun to approach yet.

Crazy that something so destructive can also be so beautiful.

Do you think there’s a point that you don’t even have your own personality anymore? You’re just whatever you think other people want you to be?

I’ve learned that if I’m passionate about something, it’s probably the right thing to care about.

People are so eager to pass on responsibility to anyone else so that they can live comfortable, unworried.

Are you angry all the time because you like the way it feels or is it merely a desperate defense against experiencing true intimacy with others?

It’s okay to not be okay. 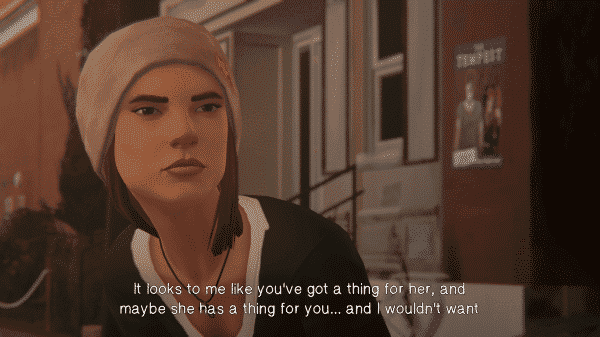 Steph reveals herself to be queer. Something I’m highlighting solely because it pushes the idea that if you’re not gay for Chloe, you are likely straight. Nope, there are other queer girls out there and Steph is repping them proud.

Is Life Is Strange some AAA, blockbuster budget type of film? No. However, what it does that a lot of games with much more money backing it don’t do is create ambiance. Like, one of the things I would do if I didn’t have the schedule I did would be just having Chloe sit, listen to the music that fits this game so well, and watch the woods burn in the distance, or see the camera shift around Rachel’s home.

I mean, when it talking about providing calm before the storm. It is like if this game made you ridiculously anxious, you are provided with a relaxing moment to distress before you head back in. Hoping that you can make the time Chloe did have with Rachel live up to all she told Max.

As someone known as a “Casual Gamer,” I don’t take much pleasure in button mashing, my attention being constantly demanded and me not getting to enjoy the game’s story elements as much as my part in it. Which makes me love the fact that if I have to make a decision which will shift the story, I’m given time to mull over it. After all, this isn’t like the first season of Life Is Strange. I have no rewind powers and while I could go to the last checkpoint, I usually don’t wish to do that until we are damn near the end of the game and I’m looking to head back episodes. Of which I’m unlikely to replay unless my save gets corrupted.

Which is all to say, I like the fact we are given time to explore the consequences of our decisions and even prep for them. One example being Drew having Damon’s money. Thanks to us, as usual, getting to dig through people’s things and get to know them through that method, I learned that his relationship with his dad is rough and that he has all these scholarships. Making it so when Damon was beating his behind, so came the question of should I not interfere and let Drew possibly get injured, thus ending his sports career, or step in and just let his dad but SOL?

Now, while I get why other games push you to make a decision quickly, to make the conversation and action seem real, it was nice to really just ponder over how action A would lead to B, and effect me way down the road which I reach Z.

It Really Drives Home What Rachel Meant to Chloe If you played the first season, you already know what happens to Rachel. Yet, with episode 1 and episode 2, we dive deeper and deeper into experiencing what she meant to Chloe. How she was more than just a replacement for Max but someone who found themselves with an entirely new room within Chloe’s heart. And honestly, at this point, I’d be surprised if any viewer didn’t find a place for Rachel in their heart as well.

Somehow, unlike a lot of YA novels and teen dramas, Chloe and Rachel are dug into without stripping them of their original appeal. Chloe the badass isn’t lost in the process of being vulnerable, missing Max and being jealous that she got to leave, or falling in love and being a bit scared about it. The same goes for Rachel. Though her fate is sealed to us and we know all the things people said, and are gaining our own impression, it’s difficult to say that any decision made is just to cause drama.

Something that, I don’t know if it is because we are making dialog decisions or not, keeps you so engaged. Though I would be remiss so not just note the strength of the dialog in developing the characters but also pointing out some lines which just feel like a hit in the gut. Of which, the ones I was able to screen shot for this review, you can see in the collected quotes section.

Silence Not Being An Option Enough

I get Chloe is a passionate person who usually isn’t speechless, but with there being a handful of times just not saying anything was an option, I wish it was more consistent. Since, sometimes, I don’t feel like starting fires or putting them out. I wouldn’t mind crafting Chloe as someone who only goes off when you push certain buttons vs. any of them.

But I guess we can only mold her so much. After all, as said before, with this being a prequel, pretty much everything is already set in stone. All we are doing is writing out the details which lead to the already known fate.