TellTale Games presents a better finale in 5 episodes than most shows do in 10, 12, or even 24 episodes. And damn if I don’t hate how long they take to speak of the possibility of another season.

Play Through Time: 1 Hour and 42 Minutes

So, what will be your ultimate decisions? Something that could really begin any TellTale Game but with this being the finale, how will you handle the newly born Joker? Working with the vigilante Joker, there was the constant question of when would enough be enough? Especially as the Joker we all know and love stabbed John Doe, ripped his skin off, and wore him for a suit. Too graphic? Well, it is the man who kills in cold blood, leaves people with a permanent smile and yet loves you, Batman, too much to kill you. For even if you don’t show it all the time, you are his best friend.

But in the pursuit of justice there are sacrifices. Leading to you, as always, choosing who is worth sacrificing and who is too important to you as Bruce Wayne, or Batman? Will Agency agent Iman be more important to you than Selina? With all Waller put you through and all Jim Gordon has said, will you forgive or turn your back on them? Heck, Tiffany is ready to be a weird mix between Oracle and Robin, but holds a secret which may change your opinion of her. Will you sacrifice a potential ally for your definition of justice?

And that is the main focus here, how do you define justice, can you accept other people’s definition and, in the end, are your beliefs so strongly held you are willing to walk that path alone?

Such a Satisfying Conclusion

I already want a season 3 announcement and the fact I don’t see one is depressing to me. There is such a satisfying conclusion, no matter what your decision is. No matter who you chose to save, sacrifice, or whether you put your closest allies before Batman’s ideals or not, you get the type of ending which makes you crave more. Not even just from this property but more TellTale Games in general. For they seriously have found amazing ways to take these well-known properties, like Game of Thrones, Walking Dead, and of course Batman, and give them new life, perhaps new fans, and craft the kind of stories which make you wish their writers perhaps would handle the live action projects.

It Seems They May Never Make The Quick Action Events Difficult 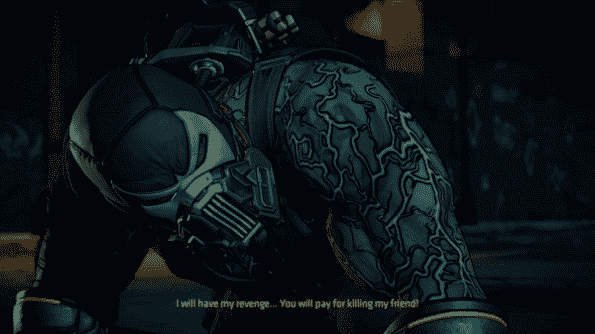 There are times when I wish TellTale would make a, for a lack of a better term, hard mode. One that made split-second decisions and actions a part of the game and the slow-mo was minimum or gone. For dialog it would make things tough, but for the action Batman is known for, I feel that as frustrating as it would be, it would also make things fun. Especially since the game still lets you hit the wrong buttons, multiple times, but as long as you get it right within the time limit you can continue.

Though, with this you’d have to expand the ability to let players have errors. Which, with TellTale, once a season starts, seemingly trying to stick to a bi-monthly schedule, who knows if they could take their series to that level. Yet, as many have said before, while the storytelling remains ace, there are still many ways their games can and perhaps have to improve.

It Really Makes You Wish There Was a Rewind Feature 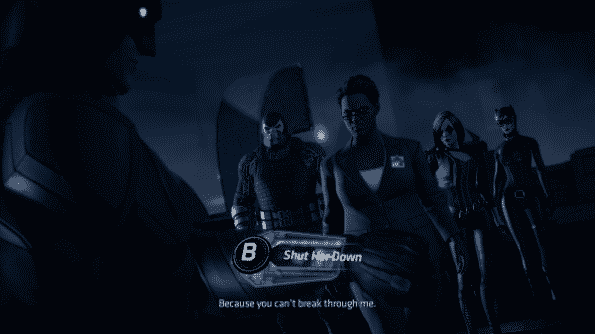 This moment is where you begin making decisions you may want to take back.

Perhaps one of the improvements that could be made is a rewind feature or at least you erasing, or getting to redo, decisions up to a certain point. It wouldn’t be revolutionary but for a “Choose your own adventure” type of game, it would add replay value. Especially after a whole season has ended. Heck, imagine, for those who’d rather a cinematic experience, once the season is released an add-on or DLC featuring all the switches for the story you were allowed to hit and just watch play out.

But, perhaps one of the main reasons I note this as on the fence is because, who really has time to go all the way back, to where you think you took a wrong turn, to fix your mistake? Such as allowing Iman to be tortured as she was, how you handled Joker’s crush on Harley, or how you decide to negotiate with Waller in this episode.

Though none of the games, to my recollection, are more than 2 hours, a minimum commitment in comparison to AAA games which can take 10+, depending if they care more about graphics than story. But, 2 hours, when you are an adult with a job and other responsibilities, is a lot to replay something just to fix one mistake. 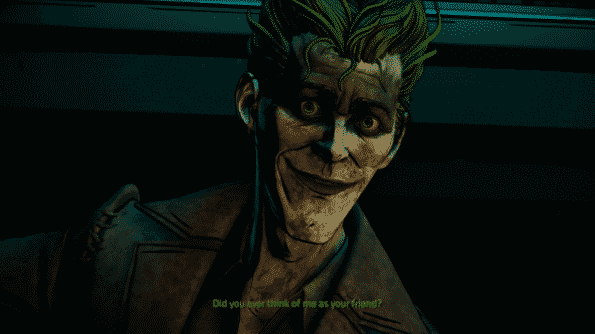 As noted in the highlight, the game leaves you craving more in the best way possible. It makes you gluttonous and finding, despite a rather satisfying offer, you must have more. Which, depending on your decisions, you can imagine a bonus episode just to wrap a few things up with.

But what pushes this to buy is the consistency. While TellTale still needs to work on elements outside of their story being fun, like not having you hit a single button just so the Batmobile shows up, there aren’t any issues with graphics, your decisions not being logged, or anything like that. So, prepare to lose nearly two hours of your life, maybe more if you wait until an entire season is out, and have it dedicated to learning the conclusion of Bruce Wayne’s story of how he crafted, and gave birth to, the Joker.

Purchase By Clicking The Link or Image Below