Batman: Season 2 (The Enemy Within)/ Episode 2 “The Pact” – Recap/ Review (with Spoilers)

Batman: The Enemy Within, continues to push the pendulum between who between Batman or Bruce Wayne is the hero, and who has to get hurt, or die, for him to maintain this duel life.

Play Through Time: 1 Hour and 36 Minutes (Includes one action fail)

In many ways, we’re back where we started in season 1. With Waller knowing our true identity and secret identity, we’re pretty much at her mercy and forced to balance the lives of Bruce Wayne and Batman once more. However, it is hard to say how well we may be able to do so as our good old friend John has to be exploited in order to prevent disaster.

But, alongside John, it seems you’ll have to become close to quite a few other people. Harley Quinn especially, but also Bane and Mr. Freeze if you know what’s good for ya. After all, you encounter them as billionaire Bruce Wayne and just your association alone spooks out Regina, who saved your behind in season 1. So what will you do now if these villains ever expose you working with them? Giving them Wayne technology and even whooping some agents ass with them?

It is your decision and one which asks of you to maybe break your code, possibly flirt with the idea of betraying John, but maybe gaining new friends in the process. Though, is it worth sacrificing John, Gordon, your relationship with Waller, and maybe even surprising Selina more than how her end episode appearance may surprise you?

Like the TV show Gotham, TellTale Games is operating within their own narrative as shown by Harley being a force to be reckoned with while Joker, John, is a little deviant but sort of innocent. Surely not the crown prince of crime yet. But, while most of the time changes to what is canon can and should be met with skepticism, Harley was handled quite wonderfully.

If only because, the roles are sort of reversed in the most abusive and well-known relationship in entertainment. Harley is now a flirt, of which who often ignores John and makes it seem, depending on your actions, you could have Harley if you wanted to. Yet, at the same time, we get that sort of Batman and Harley side of Harley. There is a softness there in which she doesn’t necessarily make it seem like she wants to get out of crime but at the same time, she wants to be taken seriously. So, with that in mind, she has to be uninhibited and seem crazy. Otherwise, she’d be taken advantage of and not taken seriously. And her opening up to Bruce like that helps push the idea these villains are much more than people you will have to take down.

In fact, at least when it comes to John and Harley, there is some desire to find a way to let them go free after getting close to them. Even if they are psycho. Hmm, thinking about it, Harley may have seduced me. 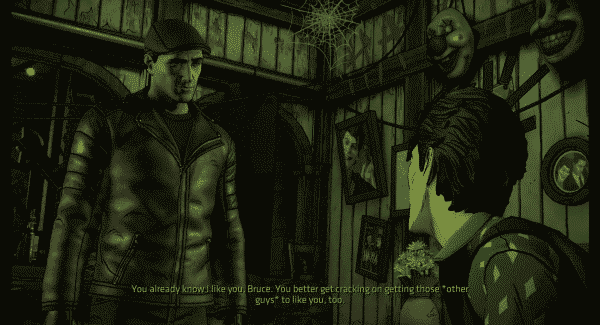 There is a certain give and take when it comes to build your own adventure games. While you are given some realm of control, the decisions aren’t always what you wish to choose and there are times when choosing nothing isn’t an option. For this episode, most of the decisions are easy to make but there are times you are really left to wish to watch the cards fall.

One example being the one which led me to get Bruce killed. You are asked to choose between Bane and Harley, in terms of stopping someone from being killed. However, considering Waller wasn’t showing up and I already showed I’m not much for killing anyone, I figured it would be best to let them have their fun. You may not agree with said decision, but every handful of decisions I’m usually in the minority. Sadly though, as with most games, indifference isn’t always an option.

But, in general, what made the first episode great, this tightrope of decisions coordinated to push you to someone’s good or bad side, keeps you on your toes. Especially since it isn’t clear if Lucius is the only one up for dying. Never mind if any relationship you sour now can truly recover later.

Interacting With These Characters Is More Interesting Than The Story Itself

If I was to be completely honest, I don’t care what the story is at this point. I don’t care what the ultimate plan is for Harley and crew or whether we might stop them. All I care about is keeping on people’s good side and seeing what they throw at me next. Something which I don’t know if it should be considered a good or bad thing.

On one hand, shouldn’t I care about the end game? Granted, with TellTale not following consistent time table this season (though currently releasing new episodes every other month), it is difficult to really get pumped for the next episode when you have no idea when it is going to happen. Yet, on the other hand, the selling point here is that you control the story through your interaction with these iconic stories. So is there any real reason to build up hype for the end game when the here and now is touted as so important? Especially as you are forced to make decisions which constantly can change what happens in the end?