It has been 6 weeks since the events of the season 1 finale, and Zoey is struggling with her new normal. But, by the end of the episode, she makes some life, and relationship, altering decisions.

After 6 weeks, Zoey finds herself forced from her bedroom and back into the world of the living. A place where Emily and David are struggling with a crying child and Maggie? Well, despite Mitch saying he set things up to make things easier for her, she can’t find passwords and the paperwork needed to close his accounts and handle post-funeral arrangements.

And during all this, the family is trying to come together, but Maggie’s guilt over getting to be with their grandchild makes her distant from the kid, and Emily desperately needs her. Especially since she feels like she is flailing and with David and her not necessarily in the best place still, and the child adding more weight to the situation, she might be at a breaking point soon.

With Danny Michael Davis on house arrest, and the stocks falling, Joan finds herself, as interim CEO, taking on a lot. So, while it isn’t the best timing for Zoey, she presents the idea of Zoey running the fourth floor. Which, over the last 6 weeks, has been run by Leif, who has made it so everyone has standing desks and dogs roam around.

For Zoey, that’s a lot to deal with, but so is the fact Mo, Max, and Simon are now friends. Also, Simon and Max still, very much so, have feelings for Zoey, and this is expressed through song and you seeing Simon try to use trauma bonding to maybe get an edge up on Max. Not to say he is trying to use Mitch’s death to win Zoey’s heart, but, genuinely, because she helped him, he tries to help her, and he knows how strong those feelings can be.

But, on a non-Zoey topic, Max is still unemployed, but maybe not for long. Because of an idea Mo came up with about ordering food from multiple restaurants at once, he wants to work with Mo to make it into a real thing. So while Mo’s man is away, it seems they will play with Max in the meantime.

Zoey has a bit of a break at work because just too much had changed at once, there is way too much pressure coming from Joan, and it all becomes overwhelming. So, she goes home, and Joan visits, later on, to check in on her. As you can imagine, Zoey feels uncomfortable about it, yet also pleasantly surprised.

However, while many have tried to give Zoey tough talks or console her, it seems Joan not necessarily changing her tone or means of handling Zoey, shady comments included, is what she needs. Through Joan, Zoey got a reminder of what normal once was and seemed to grab hold of that to get herself together. Thus leading to her accepting the position to be head of the fourth floor, making Leif head of engineering and even deciding on Max when it comes to being her boyfriend.

Well, more so she kisses him, rather than making things official, but this is progress, right?

At first, I wasn’t expecting much from “New Max.” After all, he isn’t a threat to Zoey, she has friends, family as well, so George’s role was questionable. How would he fit in a show that already had a pretty full cast. Yet, with no agenda, seemingly not wanting Zoey to be a reliable friend, sister, daughter, aunt, or potential girlfriend, that could be his role.

Granted, likely he’ll evolve into a mentee, but even that isn’t a terrible thing. For Zoey getting to mold someone, be a kinder version of Joan to a person who is a bit insecure and not sure of what their place is, she can change the culture. She can fully embrace and understand all Joan has taught her and the power many have pushed her to own.

So it should be interesting to see how that relationship develops.

We have been here before, when a kiss made it seem Zoey made her choice. However, with Zoey a bit uncomfortable with Simon trying to trauma bond, and focus solely on that, Max may have found a way to win over Zoey. Plus, with him having his own life, career, and even bonding with Mo, you could add in Max found a way to be part of Zoey’s life without being everywhere.

This isn’t to say Zoey may not get jealous due to having to share Mo now, but we can hope for the best.

We appreciate Zoey’s Extraordinary Playlist because it was made clear that life moved on, even if Zoey didn’t want to participate. At work, Leif took over her duties, at home, Maggie focused on all that is required to be done when some dies, beyond burying the body. And even with Mo, while their life is painted as flexible, it wasn’t like they moved into Zoey’s house and was waiting on them hand and foot. If anything, Mo was the main one trying to push Zoey to realize, you can’t stay in this funk forever. Eventually, though it’s hard, you have to move on.

And while that is always tough to hear after you go through something, it is also necessary as well. For getting sympathy is easy and abundant. However, someone reminding you not to drown in your own tears and be with the living and not lay down with the dead, that can be immensely hard. Yet, again, thanks to Joan not presenting the idea Zoey needs a new normal, but all she did was take a beat to handle a situation, it seems she is back on track.

Is Joan leaving to make room for George? Likely it could just be a contract thing, for isn’t it always, but I must admit that I miss Joan playing a mentor to Zoey and shading her. Not that Mo can’t do the same, but Joan had a different approach, and the power dynamic was different. Plus, sometimes with Mo, like shown in this episode, it almost feels that, while Zoey is amusing, if she ever did lose her power, and life wasn’t entertaining, he could possibly exit her life.

With 6 weeks passing, and us being left feeling that having a child would heal the family more than David and Emily’s marriage, I must admit I worry that we may avoid delving into these characters again. Mind you, the song when they are in the kitchen, it does push the idea things are still not perfect, and with Emily dealing with a bit of an identity crisis, since she isn’t perfect at something, it makes you wonder how that may play a role. Because the show could very well go into postpartum depression and other serious topics. The question is, are they invested enough in Emily to give her the screen time needed to explore that? 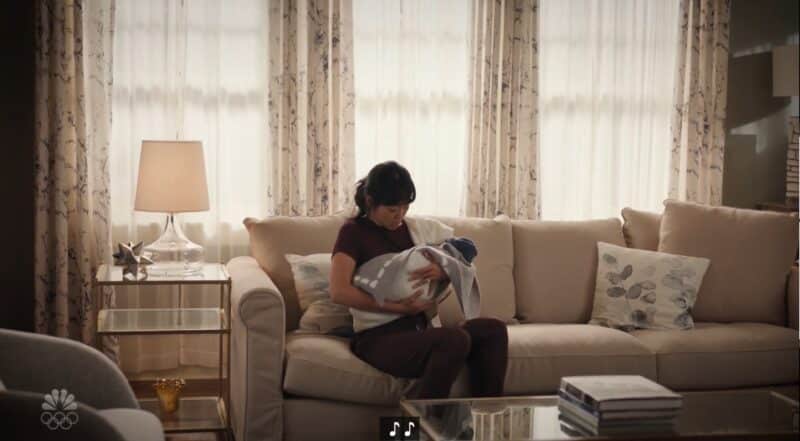 Zoey's Extraordinary Playlist returns and pushes things forward 6 weeks, making it so while Mitch's absence is felt, the characters aren't shackled and can begin new storylines.