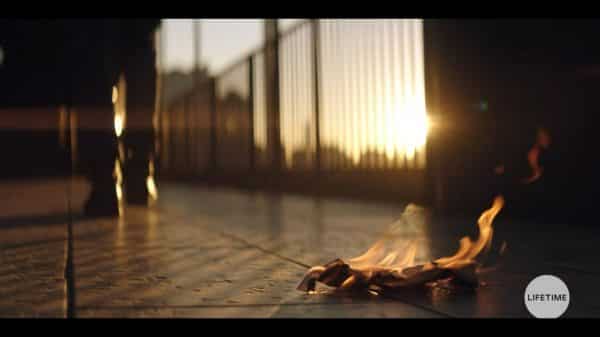 You reminds you that it can and should qualify as a horror as Beck digs deeper into Joe’s past and learns the fate of Candace and Mr. Mooney.

Joe is having nightmares about Candace and Beck takes notice. Especially since Joe is being rather secretive and isn’t trying to talk about what happened – beyond noting the cheating. So, Beck goes to anyone and everyone for answers, does a social media deep dive and the only thing she gets is the person Candace likely was using to cheat on Joe? Well, that man is dead now. Add on Candace’s brother is dead, who said Joe might have done something, and there are a lot of warning signs.

However, Joe, who has been trying to cover his tracks, uses Mr. Mooney, who is alive, but suffering from the effects of a stroke, to qualm fears. He uses him to note that the week Ethan believes Joe was hunting down Candace was spent with Mr. Mooney. Someone who is as bad off as he is because Joe was so distracted by Candace that he neglected the closest thing to family he has. The one who helped him deal with his first kill. Who would have guessed Mooney was alive? Albeit rendered nearly mute, but still alive. Which pushes the need, as it is revealed Mooney raised Joe on his own, what is the state of Joe’s birth parents? We have Paco as a device to give us a clue on that answer, but how closely related are Paco and Joe’s stories? Especially taking note of Joe making it seem he did something drastic which may have led him to becoming a runaway – be it drugging or hurting someone as a kid.

Also, considering the torture Mr. Mooney placed Joe under, like locking him into the priceless book vault, you must wonder if Joe is the reason Mr. Mooney is like this? Especially considering the Candace breakup happened around the time of Mr. Mooney’s stroke. Who is to say Mr. Mooney didn’t talk like Candace’s tryst and Joe punished him for that and all he did to him growing up? Granted, Mr. Mooney seemed a bit too friendly to make that seem like a definite, but you never know with Joe – as this episode shows.

The story of Joe and Candace began with her being part of a band and him helping move equipment. Things blossomed as they shared their love of books yet eventually, Candace got bored and cheated on Joe. Something which, so we are told, wasn’t far from the norm. The same could be said about Beck. Like Candace, she is a creative, and Joe seems to be attracted to that type. Those who put something out into the world vs. being collectors like him. And, like Candace, Joe was there when there was no fame or fortune but seemed to fade away once it was had. Yet, for one reason or another, he got cheated on.

This time, rather than a record exec, Beck cheated on Joe with Dr. Nicky. Yeah, proof is obtained! But, unlike with Candace, Beck wants to reconcile after the accusation is confirmed and move forward. Leading Joe to forgive her – for now.

I’m trying to reconcile the Candace we met, who seemed like she was from Pleasantville, to the Candace we get to know this episode. One seemed like an indie pop, ukulele playing musician, and the Candace of this episode seems like her peers would be The Pretty Reckless, Flyleaf, and bands like that. Was Joe knocked in the head so hard that his delusions of Candace threw off who she really was? Could it be like how Joe talks about Beck, we saw the way he saw Candace? That is, with rose-colored glasses, this dream girl, rather than someone who clearly was more than he could handle?

Another thing to ask is who came before Candace? Joe has to be at least in his late 20s, early 30s, and surely Candace wasn’t his first serious relationship. So what came of the crushes he had before them? Heck, if Joe came to Mooney after killing someone, and Mooney said some deserve to die, what was his advice when it came to girls? Be persistent and when you hear a “No” think of it as more of a “Not like that, try something else?”

Accidently, Paco reveals to Beck where Joe likes to hide things. This leads to Beck finding Joe’s stash of mementos. Be it Beck’s underwear, Peach’s phone, or someone’s teeth. Leading to Beck trying to get away but she isn’t quick, nor smart enough, to cover her tracks. So she ends up just like Benji, trapped in that box, with Joe having to plan his next move.

You is already confirmed for a second season and with the first maybe ending with Joe killing Beck, maybe reliving him killing Candace, what could the second season hold? Will Ron finally begin to make moves against Joe and expose him? Will Paco forgive Joe and be our guide to fully learning Joe’s past? Taking note Peach’s family has a private investigator looking into her death, will they figure out the truth?

I don’t know if this series is planning to go on forever, or if it links closely to the book, at this point, but the excitement for the finale is definitely building.

[…] some people seem to function to show you what isn’t right for you and others show you exactly what is.
— Joe

A book is far greater than most hands it passes through.
— Joe